We decided on a last minute family holiday to Cornwall this Easter. It is a location which we often visit and we always go down to the Penwith peninsula which is the furthest south-west you can go. There the coastal scenery is stunning, the beaches are great and there are plenty of walks to go on. In addition to all this it also just happens to be one of the top birding locations in the country for vagrants and also has some of the top sea watching locations in the shape of Porthgwarra, Pendeen and St. Ives. As I mentioned previously, some research had indicated that actually April was rather a quiet time down there and it more comes into its own in the autumn but even so there was always going to be something of interest to see. To add some motivation, a male woodchat shrike had been down there at Church Cove, near the southern tip of the Lizard peninsula for over a week and I was really hoping that it might stay until we got down there.

The drive down there was uneventful; we stopped off at Tintagel en route where nesting fulmars were noted, a dozen razorbills were loafing out at sea and a peregrine was seen soaring high over the town. We were staying in a converted mill house in Penberth, which is the first of the series of valleys around Lands End. The other valleys read like a roll call of famous birding locations: Porthcurno, Porthgwarra, Nanjizal, Land's End, Nanquidno and Cot Valley all within a short drive of where we were staying. I'd changed my Bird Guides subscription to pick up just Cornwall and I didn't even want to know what I might be missing back home whilst I was away as otherwise the gripp-off would spoil the holiday. Friday evening I walked up the hill to where I could get a phone signal (it was that remote) and sure enough the woodchat shrike had still been there that day. So the next morning I got up at 5:45am and was out the door just before 6am. It was just starting to get light as I headed off and I saw a tawny owl fly over the road ahead of me, presumably heading back to roost for the day. I arrived at Church Cove at around 6:50am and was in position just before 7am, staring at the patch of gorse where the shrike had been hanging out. After a short period I noticed the bird, actually in a small tree very close by and I managed a quick bit of video at very close range. The bird soon disappeared and I waited patiently for another view. During this time I was joined by another birder and a short while later it re-appeared in the same tree before flying out to the gorse bushes opposite us where it would show from time to time. After a while I headed back to Penberth but en route I got a text that a hoopoe had been seen the previous day at Polgigga, which was just a few minutes further on from Penberth. I headed over there where I happened to bump into a local birder whose patch Polgigga was and who'd found the bird the day before. Apparently it had been seen in the lane that heads out to the moor but was rather elusive. When we got to the appropriate spot there turned out to be several other birders about and the hoopoe was nowhere to be seen so I turned around and headed back to the cottage. 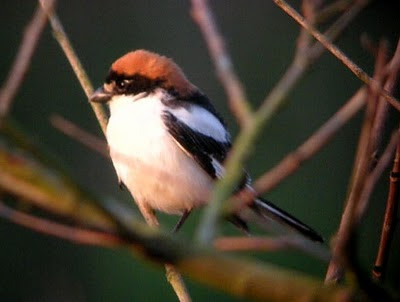 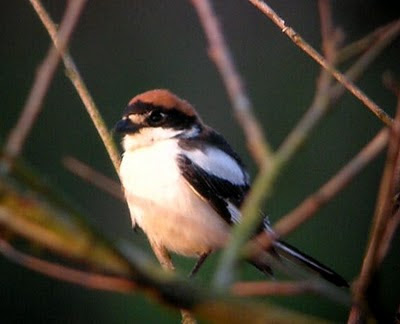 Woodchat Shrike. These shots were by far the best of the bunch. They are videograbs of a few seconds worth of footage when the bird was very close in the tree.
Apart from that one twitch, there was nothing else of particular note around in the area whilst we were there. The hoopoe was seen once more a few days later and I made another attempt on it without any joy. A great white egret was seen a couple of times at Marazion Marsh though I didn't bother trying for it. With nothing specific to go for, I would get up early and get in a couple of hours birding in the morning before we headed out for the day. I went to Porthgwarra one morning to look around and I managed a short time sea-watching from the famous Gwennap Head. I also did a couple of walks along the coast from Penberth to see what was about. On a typical coastal walk one would see linnets, dunnocks and chaffinches and corvids as the stock birds. Where it was moorland terrain then wheatears and meadow pipits were to be encountered. Interestingly I only once saw a stonechat the whole time I was there which was very unusual. 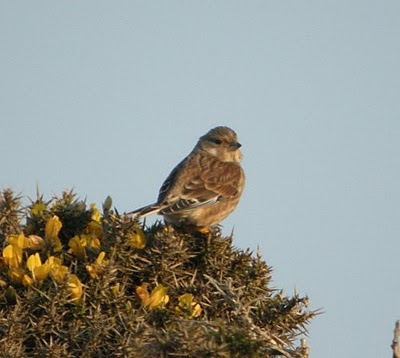 There were lots of linnets about on the moorland 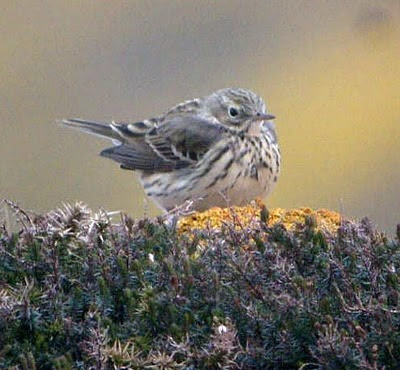 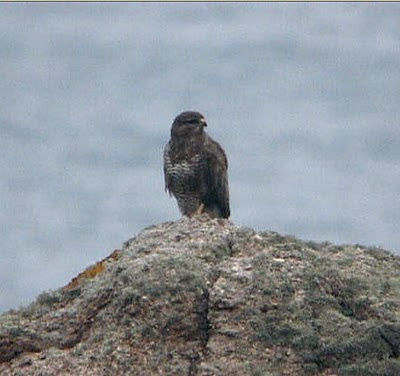 Buzzards were to be seen everywhere, here's one at Porthgwarra

During the day I'd always have my bins with me and it was a question of taking advantage of opportunities when they presented themselves. When we went to St. Ives for the day, my VLW and the girls wanted to go shopping so I took L around to the island where there was a rather stiff breeze blowing towards the shore. We found a sheltered spot and L soon fell asleep whilst I passed a very pleasant hour and a half sea-watching. I only had my bins but the birds were coming in rather close and several times there was a flock of around fifty manx shearwaters close to where I was sitting, diving away for fish. Another time my eldest daughter wanted to buy something that she'd seen from a shop in Marazion so I dropped her off and found somewhere to park overlooking the bay. During the twenty minutes we were waiting I managed to find a great northern diver which was fishing quite close in to the shore. Yet another time my VLW and the girls wanted to shop in Penzance so I said I'd take L to look at the ships in the harbour. As it was high tide we first of all stopped off by Jubilee Pool where purple sandpipers were known to roost at high tide. Sure enough there they were, just a few yards away on the rocks. By leaning over the sea wall I managed to find quite a few more which were actually roosting in the cracks in the wall and I reckoned that there were at least 35 in total together with a similar number of turnstones. 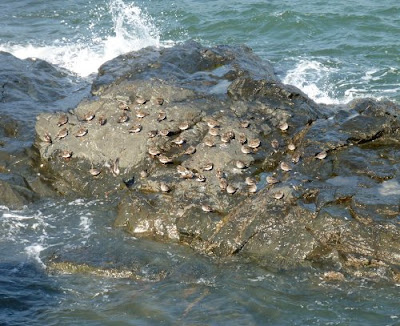 The turnstones and purple sandpipers roosting on the rocks 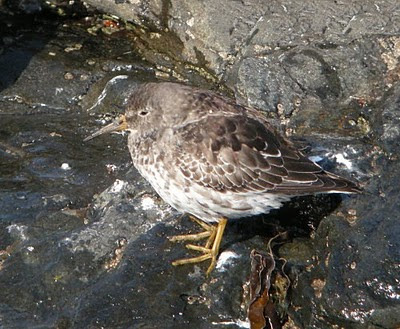 Purple Sandpiper. This shot was digiscoped but because of the angle
involved I had to hold the scope in my hand rather than on the tripod. 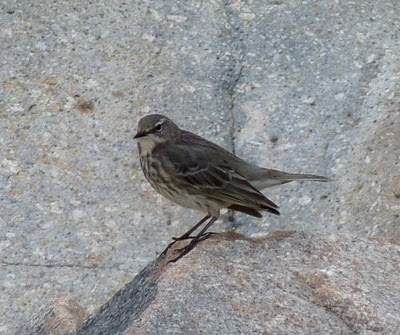 This colourful littoralis rock pipit on Portheras Beach came close enough for me to take a reasonable shot with my P&S camera. 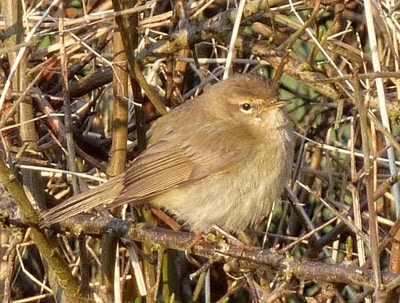 This obliging chiffchaff at Polgigga was very docile - perhaps it had just flown in and was exhausted
On a walk along the coast from Penberth to Porthcurno I heard a familiar call and looked round to find a chough flying close to us along the cliff. A short while later a pair of them appeared again though they moved on before I could get a record shot. On a walk down to Nanjizal beach we got great views of a female merlin which flew up from the gorse and headed up the valley. Whilst hanging around on Marazion beach a flock of waders flew in which turned out to consist of dunlin, sanderling and some ringed plover. A pair of ravens were frequently to be seen flying overhead in Penberth Valley. Chiffchaffs, willow warblers and blackcaps were the only warblers that had arrived yet but were to be found in reasonable numbers in the appropriate locations. All in all I managed to see some nice birds whilst doing family stuff.