This is a very belated (three weeks late in fact!) catch-up post to finish off this visit. I awoke very early, with an unsettled stomach, seemingly fall-out from my cold and it took several cups of tea to get settled again. I only briefly fell asleep again after that so I was feeling extremely tired as we packed up to leave. As usual we stopped off en route to pick up some sandwiches and I took it nice and easy on the journey back, even stopping off for a break and some refreshments on the way. We arrived back in Oxford in time for afternoon tea and a chance to catch up with our cats who'd both been missing us greatly.

Below are some photos which didn't make the previous posts.


Looking back on the trip, of course it was somewhat marred by my illness but in between I'd managed to see something of interest. Indeed it was nice to be down at Cornwall at this time of year - usually it's all booked up by guests so we don't get the chance to enjoy it for ourselves. What's more I'd managed to get a couple of new Cornish ticks for my list in the form of the Temminck's Stint (which had disappeared the day after I saw it - phew, just in time!) and the Hobby. There'd been plenty of plants to see and whilst we hadn't managed a trip over to the Lizard for the great botany rarities it had been pleasant enough. Our next trip down is in August when with any luck there will be some sea watching to be had. I can't wait!

I was feeling much better when I awoke this morning though with a classic Pendeen fog lingering first thing I didn't hurry to get up. Mid morning my VLW and our son went for a walk up to the village whilst I had a catch-up nap and then before lunch I managed a little wander about, seeing the six Ravens again and a few other bits and bobs.


After lunch I was feeling up to a little sortie so we decided to head over to Penzance and then Marazion. I dropped the other two off in town and then went to check out Jubilee Pool and the bus station whilst I waited for them. At the first location there were about a dozen or so each of Turnstone and Dunlin roosting on the rocks but I found a Common Tern, initially on one of the yellow buoys before it flew to the rocks just offshore from the pool. This species is actually rarer than Arctic Tern down here so it was nice to get reasonable views. There was nothing of note over by the bus station.

Over at Marazion we parked up at Jordans and bought tea and snacks which we ate whilst staring at the sea. I nipped over to the marsh to see if I could spot anything though to start with all I could find were a few Grey Herons and Canada Geese with a Cetti's and a few Reed Warblers to be heard singing. Overhead there were a couple of soaring Buzzards but after a while I spotted what I'd secretly been hoping for: a Hobby! This has been a bit of a Cornish list bogey bird for me for a while. They don't breed down on the Penwith peninsula (as far as I know) so you'll only catch them on passage and usually I'm not around in May so I'd yet to see one. This one soared about for a bit catching a dragonfly on the wing before landing in the Cheshire Homes trees for a preen where I was able to take a crappy record shot of it.

After a while my VLW gave me a call to summon me back and it was time to head off for a spot of food shopping. We'd promised our son that we would get fish & cnips one evening so we decided to head over to St. Just for this. First we nipped into Kenidjack to say hello to the donkeys. I tarried higher up the hills rummaging about the various flowers to see if I could find anything of interest but it was all the usual stuff. Still, at this time of year there was lots to look at.

Then it on to St Just to pick up some fish and chips before driving down to Cape Cornwall to eat them whilst staring at the sea. It was such a beautiful evening that we decided to have a little wander about and once again I was very taken with all the flowers. I even discovered a huge "hanging" of Hottentot Figs down one side of the cliff, which I've only seen before at the Lizard. I also found what I think is some genuine Western Clover

Then it was back to the cottage for the evening where I was soon fast asleep, dreaming of soaring Hobbies. 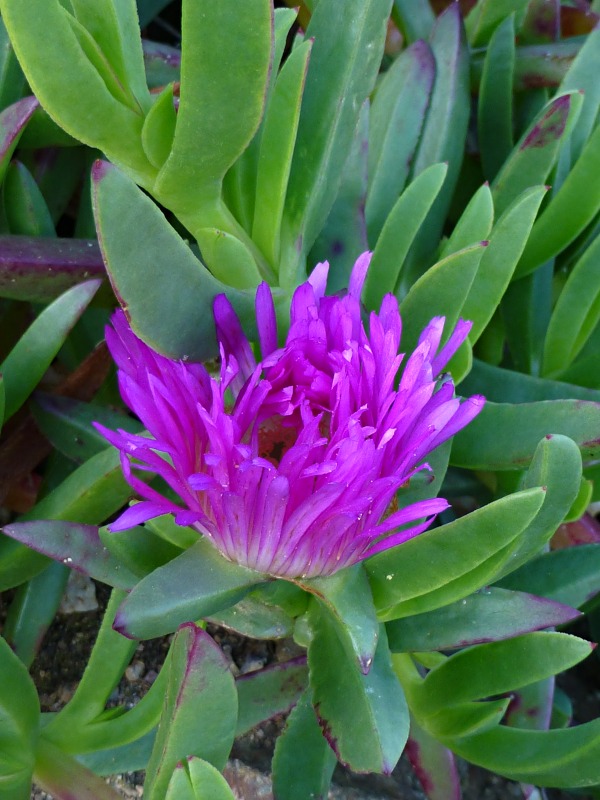 I passed much of today wrestling with my cold, mostly bed-ridden or dozing on the sofa. I did venture out for a brief walk which gave me the chance to see some of the local bird life. The resident Ravens seemed to have at least three juveniles in tow now. As well as the two adults there appeared to be another bird around as well, perhaps one of their offspring from the previous year. I managed to get a photo of the Sedge Warbler, which seemed to have seen of its rival and had sole claim to the territory. Apart from that it was all the usual stuff though the weather was better than forecast and much appreciated. My VLW and son when out for a walk in the afternoon whilst I rested. I would have loved to have gone with them but I simply had no energy. I can't wait for this cold to be over.

As feared, the sore throat had developed into a fully-fledged cold, no doubt the same one that our son had been sufferring from. What's more it seemed to be a real stinker and I felt like I had very little energy to do anything. I did have a very gentle wander about in the morning, rummage about in the plants to see what I could find. A lovely Green Hairstreak was a nice find, several Painted Ladies flew by and I had a close encounter with a Hummingbird Hawkmoth though I wasn't able to get any photos before it flew off again. There were a couple of very vocal Sedge Warblers having a "sing-off" in the valley and I watched for a while, marvelling at how energetic their songs were.

After my walk and some elevenses I took to my bed for much of the day, catching up on back episodes of podcasts and generally resting. We did manage a stroll down to Boat Cove late afternoon which was nice and sheltered from the prevailing southerly breeze and was in fact a nice sun trap. On the wildlife front, apart from a single seal and a family of Stonechats there was little of note. Then it was back to the cottage for more dozing and resting before turning in for the night.

As this year we are not letting out our cottage to the wider public, but instead just allowing  friends and family to use it, this has meant that we've had more opportunity to come down and stay in it ourselves. Whereas in the past we'd never have come down for the summer half term week, partly because of our two daughters having to revise for exams and partly because it would  have been booked anyway, this time with the two daughters both being off at University we thought that we'd take advantage of the situation and come down for at least some of the week. L, our son had just been getting over a really nasty cold and I had work to do so in the end we didn't head down until Tuesday. As usual, general family inertia meant that we didn't even leave Oxford until well after 11 a.m. though the roads were reasonably quiet and at around 3:30 pm we arrived at the Hayle roundabout. Here I dropped the other two off at the shops so that they could visit the café whilst I sped on to the next junction and on to Ryan's Field at Hayle. The reason for this was that a Temminck's Stint had been frequenting this spot for the last few days, a species that I needed for my fledgling Cornish list. Now this isn't that rare a wader nationally and in fact I've even found them on my local patch at Port Meadow but it seems much less common in Cornwall so I was keen to see it. I'd been sent a suitably gripping photo by P&H this morning so I knew that it was still around. On arrival I didn't have to guess as to where it was located as there were three people on the road-side, looking over onto Ryans' Field intently. The Stint was indeed located here and what's more was nice and close enabling me to take some reasonable photos both with my superzoon and via some digiscoping. 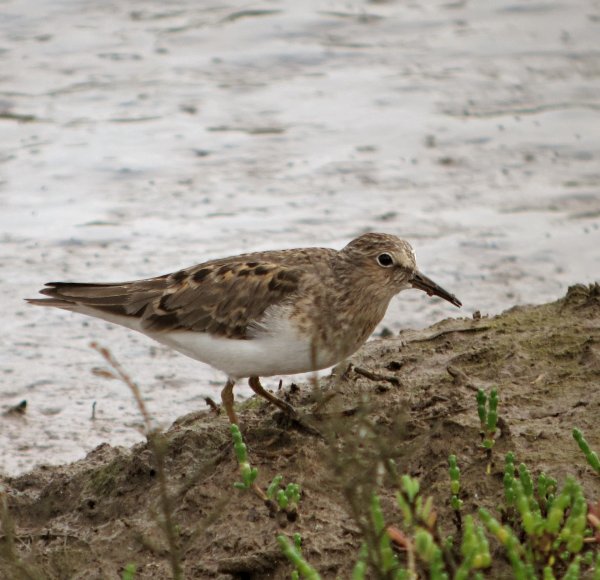 I was just crossing the road to have a quick scan of the estuary (nothing of note) when I spotted this rather striking Easter Gladiolus growing in the central reservation.

I hadn't seen this species growing in the wild before but after return to Hayle to pick up the others and then resuming our journey I noticed quite a few of them along the road-side so it's obviously a local speciality. Indeed, in general I was really struck by the great collection of wild flowers growing on the verges. I even spotted a Pyramidal Orchid by the Hayle roundabout.

We nipped into  Sainsbury's for the usual shop and I took the opportunity to catch up on a quick cup of tea which I'd missed out on whilst twitching the Stint. Then it was over the hill to Pendeen to boot up the cottage. As we drove down the Lighthouse Road I was once more struck by the wonderful flowers and started to realise what we'd been missing out on by not coming at this time of year. We had a quick wander down to the lighthouse to stretch our legs and then settled in to the cottage for the evening. I noticed that I had a rather ominous sore throat which had been coming on during the drive down and I very much hoped that a good night's sleep would see it off.
Posted by Adam Hartley (Gnome) at 10:02 No comments: