We decided to head back home today. It was always either going to be today or Saturday and whilst the forecast was for nice sunny weather today, somehow the two days lost to poor weather had taken their toll and I just wanted to go home. As we packed (which always seems to take far longer than it should) I spotted a couple of Chough feeding in the horse paddock. One was ringed but the other appeared to be unringed, perhaps the result of successful breeding last year. 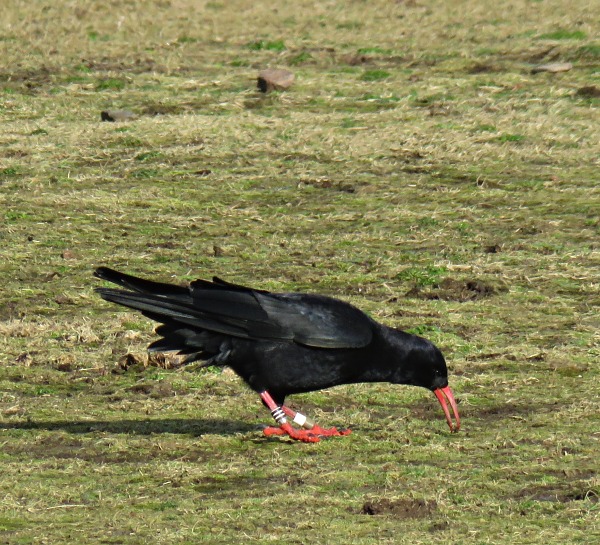 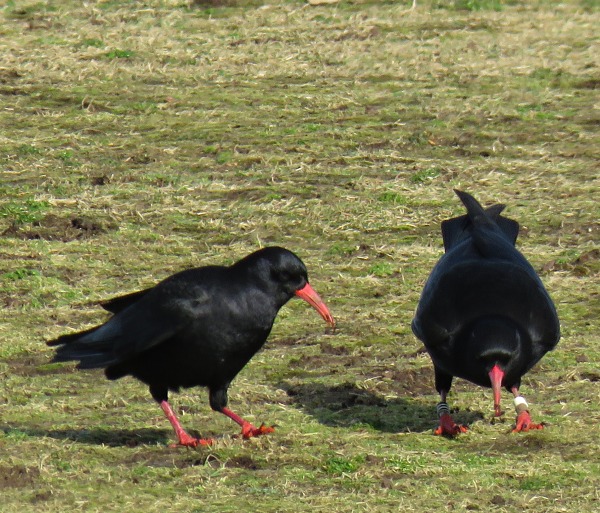 Our journey back was uneventful apart from a report from P&H of a White-billed Diver and a (the) Pacific Diver both on view at Mousehole from the Rock Pool Café car park. I was most gripped as I needed White-billed for Cornwall still. Still, there's nothing that one can do apart from to be philosophical about it all. One day!
Posted by Adam Hartley (Gnome) at 12:58 No comments:

No posts for a couple of days because of stormy conditions. Strong south westerly winds, often with rain, kept us house-bound for much of the two days though we did manage a trip over to the museum café at Geevor one day. The highlight on the birding front was watching all the birds working over the waterlogged horse paddock next to us to feed on the worms as they came up to the surface to escape the water.


Today however, the wind had abated and there was even some sunshine. It was still a breezy westerly so we decided to head over the hill to PZ and to walk along the sea front from Jubliee Pool to Newlyn, a walk that we'd not done before. We were lucky enough to find a parking space right on the main road at the start of our walk and whilst it was still a bit breezy it was pleasant enough. With the tide out there was not much to see apart from the usual Little Egrets feeding on the rock pools and some loafing gulls.

Once in Newlyn it was noticeable how much more sheltered it was. My VLW and our son popped into Warrens for some sort of pastry lunch (sausage rolls rather than pasties today) whilst I (thanks to my wheat intolerance) had to content myself with a packed sandwich that I'd brought along. We parted ways here, the other two to explore the shops whilst I searched the harbour for gulls. I soon found the juvenile Iceland Gull loafing on the shoreline. It would occasionally stir from its slumbers long enough for me to take a photo or two. 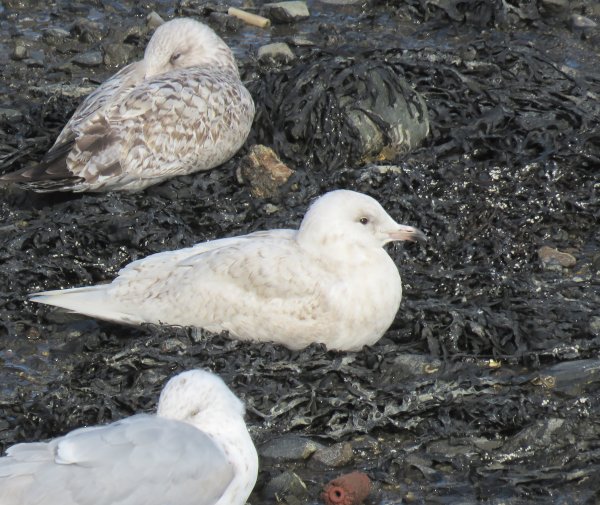 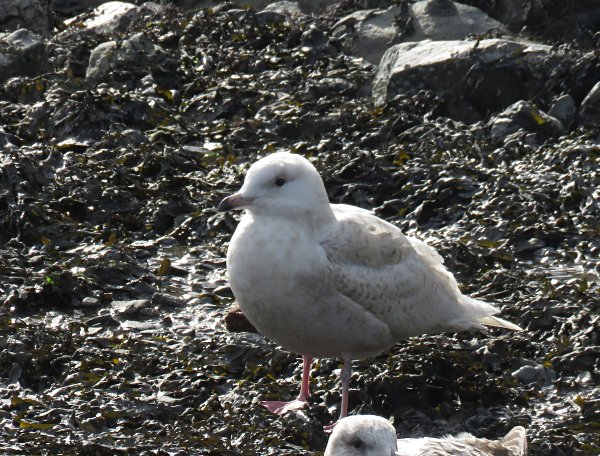 I managed to find the female type Black Redstart at the back of the harbour car park and was lucky enough to get a nice photo of it as it briefly perched on a bin. 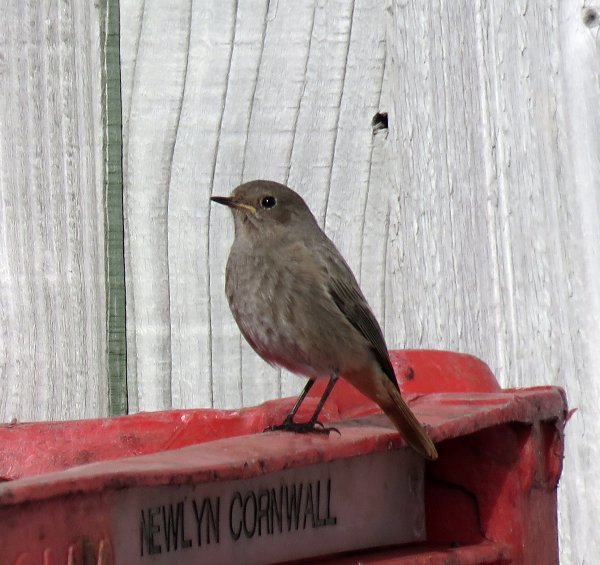 I met up with the others from the part and we worked our way around the harbour, exploring the old stone quayside and then onwards to Sandy Cover. Here I met with PF who was taking a couple of people on a local birding tour. I managed to spot one of the resident Water Rails in the copse and out on the sea there was a Great Northern Diver. On our way back towards the car I managed to spot the juvenile Glaucous Gull flying around the harbour, thereby completing the white-winged harbour set.


Back at the car there was some debate as to what to do but in the end we decided to head over to Hayle. We parked up by the causeway and the other two then walked toward the town to do some shopping whilst I birded the Saltings and Ryan's Field. There were plenty of birds around and the tide was on the way in so they were all reasonably close but nothing of particular note in either location.

I checked in on the others who still had stuff to do so I then headed around to the Copperhouse Creek area to see what I could find but apart from a Greenshank it was the same birds.

I then went to pick up the other party and we headed back to the cottage for the evening.

With no particular reason to get up early we had a bit of a lie-in this morning and over a cup of tea in bed my VLW and I put the world to rights. Then it was time to take stock of what needed doing in the cottage (which thankfully wasn't too much) before I headed out for a wander down to the lighthouse. It was the usual stuff: a single Raven, a couple of Chough in amongst the Jackdaws and a flock of Linnets in the horse paddock. Down by the cliffs it was nice to see that the Fulmars were already back and investigating various rock ledges for prospective nests. I always check the garden at the Old Count House down next to the lighthouse car park: I have this dream of finding something like an Yank thrush of some kid there one day but it was just a Song Thrush today. I scoured the lighthouse building carefully for Black Redstarts but couldn't see any. On the sea it was just Gannets and Fulmars with just the occasional Auk flying through.


In the afternoon we decided to head over the hill towards PZ where my VLW and our son wanted to do some shopping. So I dropped them off and headed on to Newlyn to look at the gulls. However, they seemed to be doing some building work there so it wasn't possible to walk along the quayside like I usually do and in the end I headed along the road to view from the old stone quay instead. However, I couldn't see any white-wingers and eventually I headed back to the car to pick up the others.

As it was time for tea, we decided to head along the coast road to Mousehole to the Rock Pool Café. Unfortunately they didn't have their usual gluten-free cake selection so in the end I settle for a hot chocolate with added lardiness. Whilst the other two lingered I headed back out to the car par where I spotted a birder huddled under the shelter of the wall scoping St. Clements Island. It was gull guru ME who'd been there for some time watching the various white-wingers coming and going so I settled down to join him. He picked out a juvenile Glaucous Gull on the island as well as a possible Smithy though he said that you were never going to be able to see enough to nail it down at this distance.


When the rest of the family came out I bade ME farewell and we headed back to the cottage via Sainsbury's to off-load some recycling that our eldest daughter had helpfully left behind last year from when she'd been down with her friends. Back at the cottage with a storm forecast for that night, we battened down the hatches and settled in for the evening, trying to keep warm as the wind whistled around the cottage.
Posted by Adam Hartley (Gnome) at 10:56 No comments:

11th February, Back Down (Finally!)

Regular readers may have noticed a distinct lack of posts for quite some time. Indeed there was no sign of my usual October visit which is normally the highlight of my Cornish birding year. The reason for this was because of the unusually poor birding autumn that we had nationally last year. I suppose that it has to balance out the fantastic autumn of 2016 where we had constant easterly winds all autumn channelling all those lovely Siberian Accentors and other eastern goodies our way and after that feast had to come some famine. Whatever the reason, it was prevailing south westerlies all autumn last year and whilst I'd blocked off the whole of the month for myself at the cottage, as I followed things from afar there was never any moment where I was at all tempted to come down. So it's not until now that we've finally made it down for our traditional February half term visit to the cottage to see how it's survived the winter so far.


Given the time of year (and the distinct lack of anything tempting on the bird front) there was no urgency to our coming down this week so we did some leisurely packing on Saturday and then on Sunday morning at some time after 10 we set off, stopping first to pick up lunch (which we'd forgotten to make before setting off) and then for petrol. Having been scouring the CBWPS web-site in the week leading up to our departure my interest had been piqued by a couple of reports of Marsh Tits at somewhere called Cardinham Wood (which I'd never heard of until then). The reason for this interest was that this was a bird that embarrassingly I still needed for my Cornish list. Actually, it's not so surprising as they're not to be found at all on the Penwith peninsular with College Reservoir probably being the closest location. It's one of those species which I knew that I would catch up with eventually but hitherto had not actually got around to it. A quick bit of research showed that Cardinham Wood was actually just a few minutes off our route along the A30 and with the promise of a cup of tea in it, my VLW didn't take much persuading. It turned out to be incredibly busy there: indeed there were so many dog walkers around that we did wonder if we'd inadvertently stumbled into some doggy convention of some kind. We eventually found somewhere to park and whilst my VLW and our son L went off to get the hot drinks in, I soon located the feeders which were right next to the café. A large number of Siskins were camped out there and Coal Tits and the occasional Blue Tit were also regularly visiting. It wasn't long before I saw my Marsh Tit though it seemed to prefer not to linger on the feeders at all but would do a "hit and run" before eating its food in a nearby tree so try as I might I wasn't able to get a decent photo at all. Apart from that there was a Grey Wagtail and some Chaffinches feeding on the dropped seed under the feeders but that was about it. 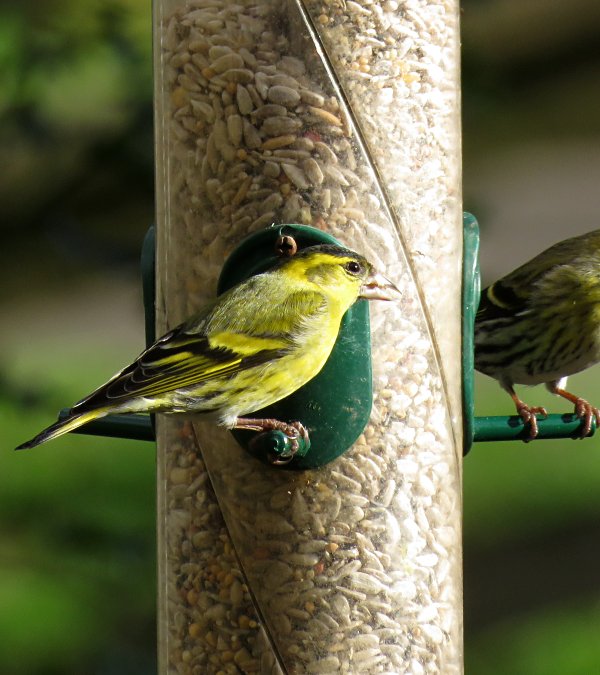 The rest of the journey was uneventful and at around 4 we arrived for our customary Sainsbury's shop before heading off to boot up the cottage. It was incredibly windy on the north coast and the cottage heating system took some time to coax into life but eventually it was up and running and we settled in for the night.