It was time for me to head back down to Cornwall again, only a few weeks after my last visit but our first guests were going to be arriving and we had lots of things to do before they turned up. Admittedly these guests were my brother and his wife and so were going to be rather tolerant guests but all the same it gave us the motivation to get lots of little jobs finished off. As it was half term the whole family was coming down and that coupled with the fact that there was lots to do meant that there weren't going to be many birding opportunities. In fact it had all gone very very quiet in Cornwall anyway with hardly anything of interest reported since my last visit. To add to all this, a day or so into the visit we all came down with a cold that L our four year old had generously brought home from school so I was often too under the weather to go out birding even if I'd had the opportunity.
To get a measure of how quiet it was, I only got my scope out once for a single sea watching session down at Pendeen (well it would be rude not to since I was there). I had been hoping for a stormie or even a pom or two but the result was lots of manxies and a single balearic shearwater from 6am to 8:20am. 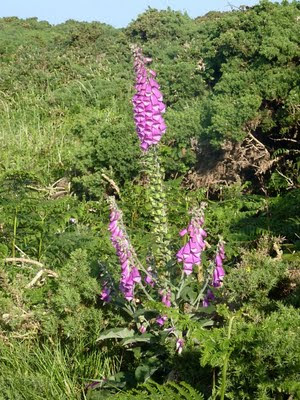 Whilst the gorse and the thrift are now past their
best the foxgloves are all out just now
One advantage of having the fledgling Cornish list to work on is that there is always something to go for even at this time of year and one sunny and calm evening local birder John Swann very kindly called up to ask if I fancied going to look for the nightjars at their usual location. Of course I jumped at the chance and we enjoyed really good views of three birds flying around often at quite close quarters though there was remarkably little churring going on. In addition I managed to convert grasshopper warbler from "heard only" to a full blown tick which was an added bonus.
Whenever I had a spare moment I would go for an amble just around the local area and it was fun to see how the local breeders were getting on with their families. It was all the usual stuff but very enjoyable to see nonetheless. 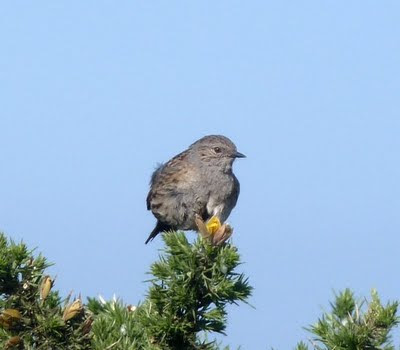 My photographic offerings are all rather crap this time and were
all taken on my point and shoot camera. Nevertheless this
dunnock allowed me to to approach close enough for me to get a
reasonable shot
As a mark of how quiet it was, the only call that I got of something good being around was on the day that were were due to leave when I got a text from Dave Parker saying that there were 13 red kites currently circling over Kenidjack valley. As we were packing the car I couldn't exactly rush off but a short while later John Swann called with the same news and he explained that in Cornwall there are one or two "red kite days" each year when hoards of them come in and today was such a day. Indeed he'd had one over just up the road at Trewellard. As I packed the car from then on I kept an eye to the skies all the time. When the family was all finally assembled in the car I asked them to keep an eye out for kites but we got to Penzance without a sighting. We were just heading on the A30 between the Long Rock roundabout and the Marazion one when I spotted a couple of interesting looking raptors in the sky circling over Long Rock itself. Despite complaints from the rest of the family I pulled over somewhere safe, got the bins out and walked a short distance where I could get a clearer view. Indeed they were a couple of red kites, a rather jammy end to my stay there. It turned out that Dave Parker had a number of groups of kites over Long Rock that morning so it was clearly a good kite spot. 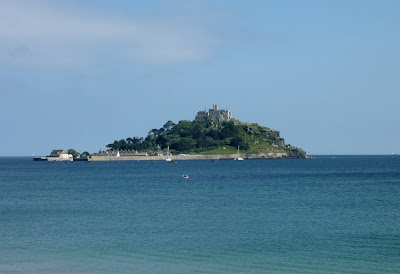 During the week the wind died away and the
sea became flat calm in Mounts Bay
It had been a very quiet interlude down in Cornwall and with June only just starting it probably wasn't going to get any better any time soon though of course the sea watching season will be getting starting soon. Needless to say someone has to head back down there to finish off a few odd jobs and I'll selflessly volunteer once more to save the rest of the family that burden. If nothing else there are a number of common birds that I still need for my county list there so there's always plenty to do.
Posted by Adam Hartley (Gnome) at 17:44 No comments: