On Sunday morning I was back down at the lighthouse for another session. Whilst it had been very windy and rainy overnight, by morning it was calm and sunny, much more so than the previous day. I settled down in the same spot as yesterday and started watching. It was immediately obvious that things were slower than yesterday with a manxie rate of just over 60 per hour. Once again there were the usual gannets and fulmars as well as the shags that often rest on the rocks themselves. A few kittiwakes flew through and there were a few auks zipping about. A couple of rock pipits were having a squabble around the lighthouse walls and an inquisitive rabbit came quite close until I moved suddenly. About an hour into the session I picked up something much smaller fluttering along near a manxie. In size and with its white rump it looked like a house martin though the rest of its body was black. It had a very fluttery flight and would settle on the water for a moment before flying up again. I soon lost it amongst the waves but there was no doubting what it was: a storm-petrel. A little while later I had an auk zoom through the scope's field of view which was different enough for me to chase it in the scope: it was smaller than then razorbills and guillemots, seemed to fly faster and I managed to catch a flash of red-orange colour on the bill: puffin! To round of the session I also managed to pick up the huge dorsal fin, smaller tail fin and rounded snout of a basking shark. I tried to video it but it was moving around a lot in the waves and it disappeared before I was able to record it. So all in all, despite the slower activity a most productive morning's session 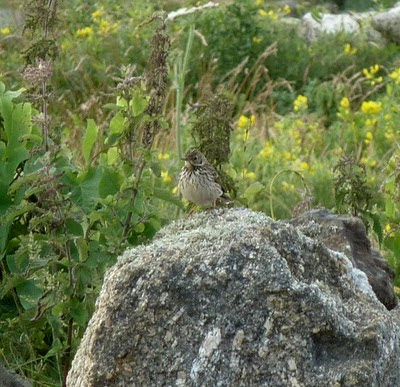 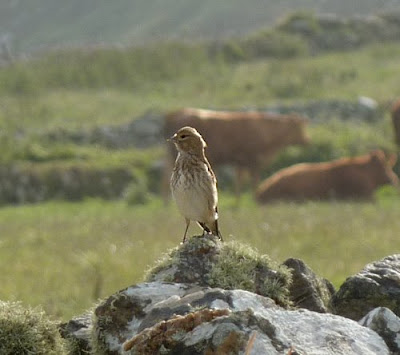 A meadow pipit and a linnet on the stone wall near the lighthouse,
both taken with my P&S camera.
Later that day I did have time to wander around the various coastal footpaths near the lighthouse. Whilst the really famous Penwith vallies are further south (Cot, Nanjizal etc.) it turned out that there was a very small valley near Pendeen with a little stream flowing down to the sea near what's called Boscaswell Cliff. The terrain was a wonderfully overgrown mix of gorse, ferns and heather. It was full of birds as well with a very entertaining family of stonechats present: the youngsters would buzz around all over the place calling loudly whilst the parents tried to keep them in order. There were also linnets, meadow pipits, wrens, dunnocks, blackbirds, sedge warblers and whitethroats to be found in this area. I started to wonder idly whether some exotic vagrant might turn up in this little valley this autumn. Probably wishful thinking but you never know. 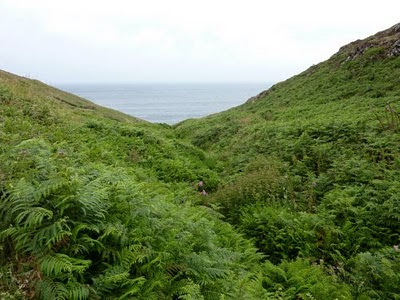 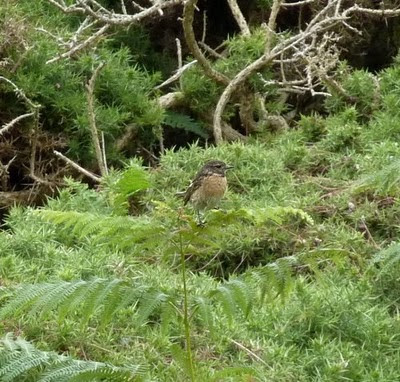 One of the juvenile stonechats taken with my P&S camera 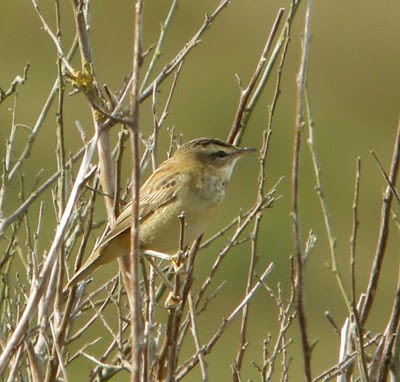 All too soon it was time to head back home and it will be far too long before I am able to return to this wonderful area. I'm looking forward to it already.

Saturday morning started grey and overcast and a bit drizzly (though it brightened up later) as I arrived for my first sea-watching session at the new patch. Round behind the lighthouse in the shelter of the lighthouse wall I found a nice concrete seat at just the right height. From there one had a good view of the rocks that lie just off shore which according to the OS map are called either "The Wra" or "The Three Stone Oar". I trained my scope on the left-hand most one and then moved it up so the rock was just out of view. This gave me a nice marker for finding my viewing spot each time so that if I moved off to follow a bird in flight I could always come back to my spot again. I'm sure that all this will be obvious to regular sea watchers at Pendeen but for me it was all new. 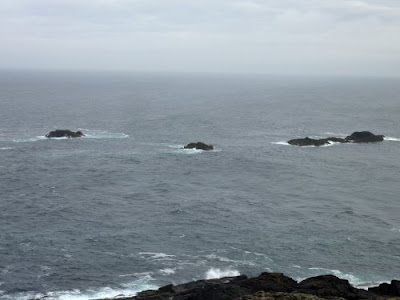 "The Wra". I trained my scope just beyond the left-hand rock. 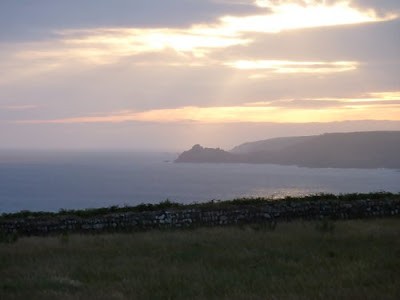 The Gurnard's Head shortly after dawn

It was obvious from the start that there was quite a lot of activity this morning. To keep track of things I counted the manx shearwaters that went by and over the course of the two hours and twenty minutes that I was there I had a total of 480 birds which comes out at over 200 birds per hour so there was always something to look at. There were perhaps a couple of dozen auks that went through: a mix of razorbills and guillemots. Fulmars nest on the cliffs near the lighthouse so there were plenty of those around and a few kittiwakes flew through looking as beautifully elegant as ever. There were the ubiquitous gannets flying through and the resident shags on the rocks. At around 7:30 I picked up a shearwater that instantly looked different:it had a pot-bellied look and when it rolled to reveal its underside instead of being the clean white of a manxie it was rather a grubby pale brown with a smudged borderline between the brown upper body and the paler underbelly: a balearic shearwater - very nice! I watched if for a minute or so as it worked its way south-west. Later that day one was seen at PG so it may have been the same bird working it's way around the Land's End peninsula. At a little after 8 a.m. I had to pack up but it had been a very enjoyable first morning's birding at Pendeen.
Posted by Adam Hartley (Gnome) at 17:53 No comments:

My family and I have been coming to the Penwith peninsula at the south-west tip of Cornwall for some years now on family holidays. We started coming at around the time when I got interesting in birding again. This meant that as well as the family appreciating the wonderful coastal scenery and the great beaches I was able to enjoy some of the top birding in the country. Since then I've always kept a keen eye on bird sightings in Cornwall. At Easter whilst down on yet another holiday in the area we stumbled across a house that was for sale in the Pendeen area. We rather fell in love with it and, despite its run down appearance and the fact that it needed a fair amount of work, we decided to buy it. This will mean that I'll be able to visit this beautiful area more frequently and as a keen blogger (Port Meadow Birding, Gnome's Birding Diary) I thought that I would create a blog specifically for my Cornish birding experience. I realise from reading the various blogs that are around that my occasional visits down to the peninsula might seem like mere dabbling compared to those who live there but my intention is to celebrate the wonderful bird and other wildlife of this amazing part of the country albeit with relatively infrequent updates.

I should point out that I am a relatively inexperienced birder, it being just three years since I took it up again. Nevertheless I am keen and a fast learner and am always striving to improve my birding skills. I have also got rather interested in photography but so far have avoided going down the DSLR route preferring to stick to digiscoping and taking shots with my Point & Shoot camera (currently a Panasonic Lumix DMC-TZ7 which has a 10x optical zoom). This means that my shots are never that great in quality but I hope they at least capture the scene well enough for this blog. 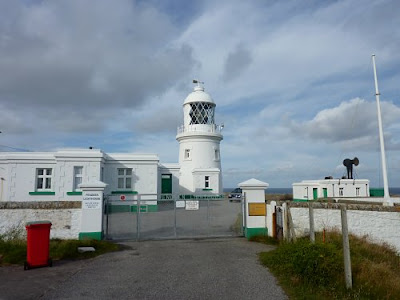 I've added a couple of older posts from my other blog describing the birding that I did previously whilst on family holidays in the area.
Posted by Adam Hartley (Gnome) at 08:49 No comments: