Another trip down to the cottage in Cornwall to do some more decorating. This time I was accompanied by my VLW and sans enfants for the first time that we can remember. While of course it was a delight to spend some time with my better half, albeit just decorating, this did mean that birding time was rather limited so this will be a rather short posting with not much to report.
We came down on the Friday and regular readers will know that normally I like to stop off somewhere "up county" to work on my Cornish list. With my VLW with me there was no prospect of anything extensive but I did suggest that we stopped somewhere picturesque to eat our packed lunch and that the Fowey valley had looked really pretty last time I'd visited. Accordingly we did indeed turn off at this point and I even managed to point out a couple of dipper on the river as we drove down. After finishing our lunch I went on a very short walk to "stretch my legs" and when I returned some ten minutes later I'd just happened to have seen a willow tit along the road a short distance from where we'd parked - what a coincidence!
Normally once I arrive in Penzance I make the most of the remaining daylight and bomb around all the birding hot-spots but for some reason my VLW wasn't interested so instead we did some shopping and headed over to the cottage. We did later go for a short walk around the cottage area to blow away the cobwebs from the journey though the only birds I spotted were the fulmars on the cliffs.
With the days taken up with furious decorating my main birding opportunities were first thing in the morning as I tend to get up before my VLW. On Saturday morning I duly did this an decided to nip over to Prussia Cove, or Kenneggy Cove to be more exact for the first winter drake velvet scoter that had been there for the last few days. I'd been told by a seasoned Cornish birder that he'd seen more surf scoters than velvet down in Cornwall so I thought that I'd better go for this bird. Fortunately the cove was nicely sheltered and it didn't take long to find the bird and despite the distance I attempted some video footage. The only other birds of note were a couple of great northern divers.

The velvet scoter.
Sunday morning I once again got up early but with nothing on the peninsula that I particularly wanted to see I decided to do a spot of seawatching at the lighthouse. At this time of year there's not a lot going on on the sea but within a short time of starting I was had a manxie go by and then a few minutes later a nice balearic shearwater. After that it got rather quiet and a great northern diver bobbing past on the sea was the best I could come up with. 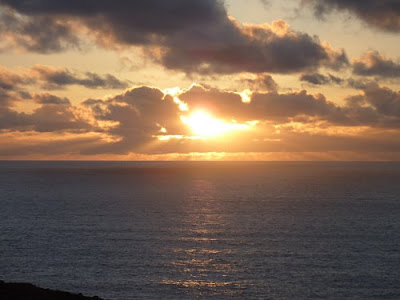 With no bird photos to offer, here's a rather nice Pendeen
sunset on what was a beautiful sunny Sunday
Monday morning was a repeat of Sunday with another early morning seawatch. This time I soon had a very dark balearic go by which had me thinking of sooty though the light was good enough for me to be able to spot the paler area on its belly. Another great northern diver flew past as did a flock of three greylag geese but apart for that it was very quiet. During a break from decorating I did spot a couple of sand martins flying over near the lighthouse though I don't know if they'd come in off the sea or had been following the coast northwards from further south. Three ravens also flew by near the cliff being pursued by a jackdaw. Later that day we went for a walk into Pendeen and I spotted a chiffchaff along the road calling quietly. 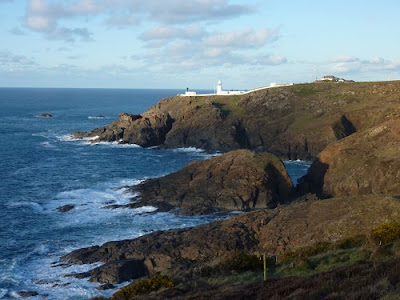 I never tire of taking lighthouse photos, here's one
from the coastal path to the south
Tuesday morning it was time to pack up and leave. We did stop in briefly at Lelant Saltings for a quick scan of the estuary though it was very quiet and apart from a few godwits (black and bar-tailed) there was nothing there apart from some distant loafing gulls. It had been a very quiet birding interlude down in Cornwall though I'd managed a couple of Cornish ticks and it was nice to see the migrants starting to come in.
Posted by Adam Hartley (Gnome) at 08:15 No comments:

With the family now down with me my birding opportunities were much more limited. However, I tend to get up before the rest of them and would often choose to nip down to Pendeen watch to see what was about. On Tuesday I chose to wander along the coastal path and down to the sea a few hundred yards west of the lighthouse itself and from here I spotted loads of auks, kittiwakes and gannets sitting on the water and I managed to pick out a single manx shearwater in amongst them. I wondered whether the birds were roosting there overnight or if they were being drawn in by some close-in bait fish in a similar manner to Carbis bay. This was nevertheless enough encouragement for me to resolve to do a proper sea watch down at the lighthouse the next day.
Tuesday afternoon we went for a walk en famille along the beach at Marazion into Marazion itself where we had a nice cream tea at the Godolphin Hotel. On the way back I spotted a black redstart on one of the buildings near the end of the causeway. 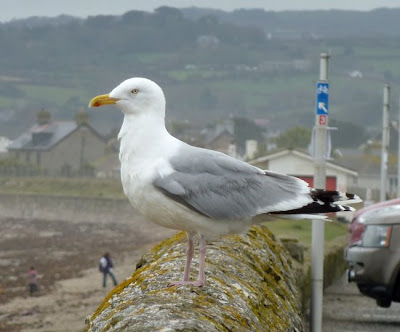 A herring gull at Marazion
Wednesday was fog bound and I didn't bother to go to the lighthouse at all. Later in the day I sneaked in 10 minutes at Jubilee Pool where I all I could manage was one diver though I didn't get good enough views to identify it.
Thursday morning was mercifully fog free so I went down for an hour and a half's session at the lighthouse. Once again there was a wide variety of birds on the water though as I watched they gradually dispersed. I adopted my usual tactic of setting my scope just beyond the left-hand most of the Wra which meant that birds were reasonably close and I wasn't straining to identify things as they were passing in the distance. During my session I spotted 8 manx shearwaters, 4 balearic shearwaters, 2 puffins, a diver species (probably red-throated though I've yet to get to grips fully with flying divers in winter plumage) and huge numbers of auks, kittiwaks and gannets. In addition a raven was working it's way along the cliffs. As I walked back to the cottage I heard the plaintive cry of a plover. Whilst it was probably a golden plover one can't help but wonder given that one is right on the west coast whether it might be some American plover vagrant calling out with joy at finally making landfall. As I never saw it I'll never know but that's one of the great things about Cornish birding: all these rarities are a real possibility.
Later that day most of the family went to the cinema so after dropping them off I elected to go and stare at the sea instead. At Jubilee Pool the usual purple sandpipers and turnstone were about and looking across towards Long Rock I managed to spot the Pacific diver and a great northern diver together. I was lucky enough to get both birds in the scope at the same time which gave a great opportunity to compare and contrast the two species.
The purple sandpipers were around and as delightful as ever
Friday morning I was back at Pendeen again and once more there were large numbers of birds on the water. Today I counted 2 manx shearwater, 1 balearic shearwater, and another probable red-throated diver. In addition I spotted an interesting large gull on the water that caught my attention: it had a strongly streaked head though the streaks were very confined so that it effectively had a hooded appearance. The wing and mantle colour was rather pale, far too pale for a great black-backed and even looked too pale for a lesser black-backed though definitely darker than the argenteus gulls that were also about. Given that I was in Cornwall where several had already been spotted this immediately got me thinking of Azorean yellow-legged gull, a species with which fortunately I was familiar having seen the bird a couple of years ago at Appleford in Oxon. Unfortunately the bird flew off as I was reaching for my digiscoping camera and I wasn't able to do things like age it properly. This was important because, according to Martin Elliot with whom I spoke later that day, fully adult birds would have lost their head streaks by now. It would have to remain a "possible/probable" though nevertheless a most interesting sighting.
After a final bout of painting it was time to head for home. It had been a great week in my favourite part of the country and a wonderful opportunity to add to my Cornish list.
Posted by Adam Hartley (Gnome) at 04:25 No comments: