Today I was heading back home already, the end of an all too brief visit. Before I could leave though I had lots to do in the cottage first: some final finishing off of my touching up work and cleaning up after myself to a standard fit for our first guests in a couple of weeks time. Thus it wasn't until nearly midday that I finally left the cottage and headed on up the A30.


Of course I was going to stop off somewhere en route but given the lateness of my departure I opted for just one brief detour. I'd been given some details of where to look for the release scheme Cirl Buntings so decided to go and take a look. I'd been given a couple of locations to try but when I arrived at the first one I wasn't exactly sure where to go. I wandered around a bit and found a couple of bird feeders outside a house but they were empty - were they supposed to be the feeders that the Cirl would come to? I checked out a few nearby fields but there was nothing very promising and it was blowing a real gale so any sensible Bunting would be well hunkered down. I wandered back to where I'd parked. In a nearby thicket of bramble a few House Sparrows were chirping away noisily though they were impossible to see in the denseness of the cover. I wandered down a footpath a little and found a stubble field though its only occupants were half a dozen Skylarks. Defeated I headed back towards the car. I'd just got back to the bramble thicket when I spotted something moving on its edges: a Cirl Bunting! It crept deeper into the brambles before I could get my camera out but at least I'd had a reward for my efforts.


I went on to the second location which was in a little hamlet and had another wander around. There were plenty of Chaffinches around everywhere and some birds coming to some feeders but no sign of any Cirls. With time marching on, a sighting already in the bag and the first signs of a cold starting to take hold within me (I blame standing around on Rosenannon Downs for hours in the freezing cold!) I didn't linger but headed back home to Oxford, arriving early evening. 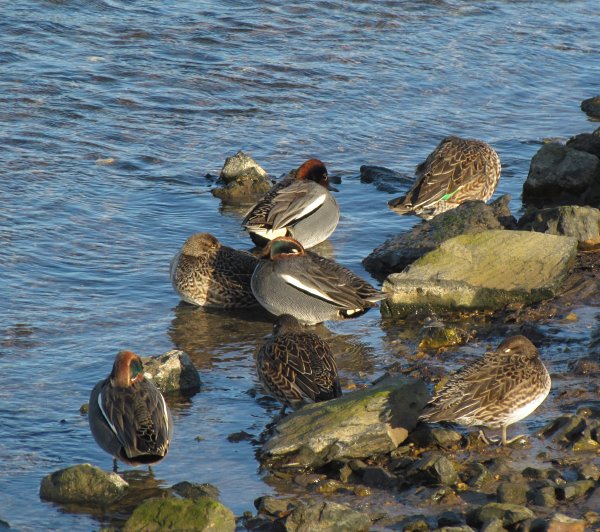 
Looking back it had been quite a productive little visit despite the quietness of the time of year. That's the advantage of having a county list to work on: it gives you something to go for even when all is quiet. I'd managed to add four ticks to my list as well as the release scheme Cirl Bunting, namely: Green-winged Teal, Short-eared Owl, Yellow-legged Gull and Brambling. Of course after a while I'll have got all the easy Cornish ticks and it will become progressively harder to find stuff that I still need but for now it was keeping me happy. With spring now just around the corner I couldn't wait to come back down to my favourite part of the country.