Just How Bad is July?

Back home in Oxford from my recent trip to Cornwall I was reflecting on my trip and what I'd seen and how little that was. Of course this was entirely to be expected, it being July but just how do the months compare? I'd done some analysis on this subject for Oxfordshire a while back on my Oxon blog using Bird Guides. Using "Scarce or better" as the rarity criteria and using "first records only" to avoid multiple records of the same bird you can simply count how many records turn up for each month for "Cornwall only". Incidentally, I used BirdGuides rather than RBA because the latter doesn't have "first records only" and nor does it have "all records for July" in it's search which means that you have to do it year by year specifying the actual dates. For rarity-rich months such as October you need to do it month by month even for Bird Guides as they have a 200 record limit for a single query. This method is not fool-proof as blindy just counting records will include things like negative reports etc but as a method of comparison between months it should all come out in the wash.


First Record Scarce,+ for Cornwall Month by Month Since 2001 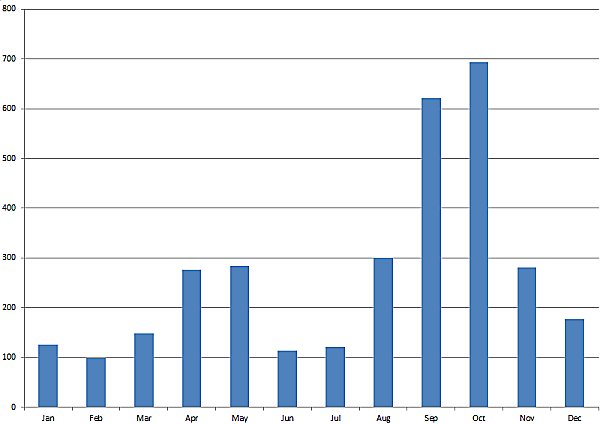 No great surprises there in terms of which months are the best though it's nice to be able to put some numbers to these things. For example it's interesting to know that September and October are more than twice as good as May. I've included reports from the years 2001 to 2011 so 11 year's worth. By dividing by 11 you get the number of Scarce+ records you might expect in a given month on average, a stonking 63 for October!


There is actually one good practical use for this approach: I'm planning on coming down in October sans famille for a week of dedicated birding and I was wondering which week would be the best. Using the same approach on a week by week basis one can come up with the relative merits of each 7 day period in October. 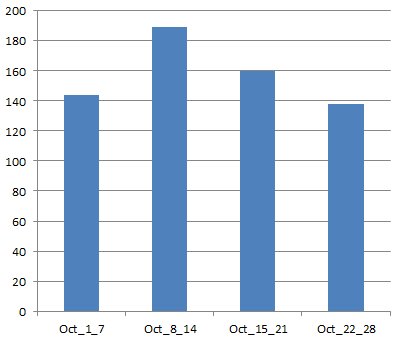 So you can see that they're all pretty good but the second weeks is the best so perhaps I'll aim for that one.


In conclusion, if it's scarce or better birds that you're after then these tables show you the months or weeks to aim for. Don't get me wrong, I very much enjoyed my week in July but I also like seeing a nice bit of "rare" so expect me back in the peak autumn months.