Sadly, our time here was already up. This morning we woke up to yet more fog and set about finishing off our oustanding DIY tasks before packing up ready for our departure. By about half past one we were finally ready to leave and set off on the long journey back to Oxford. The only point of note on the trip was that my VLW thought that she saw a Black Kite fly over us on the M4 just as we approached our junction 15 turn-off. Whilst she's not a birder at all, she knows Red Kites pretty well and described this as smaller, very dark and with only a shallow fork in the tail. Sounds promising though sadly I never saw it. 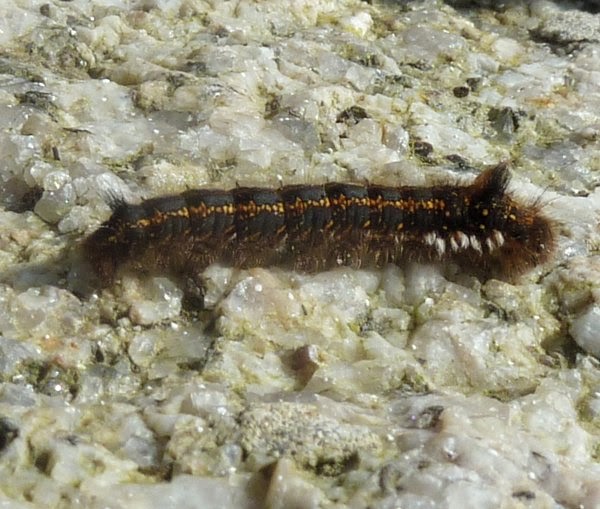 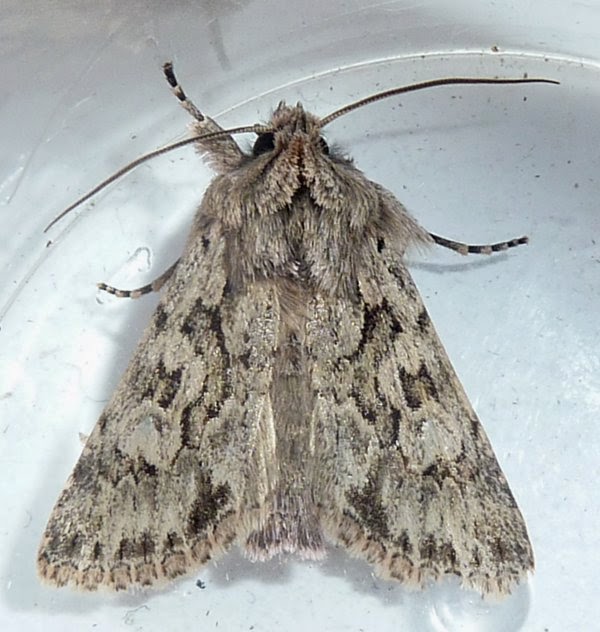 It was another enjoyable stay down in our favourite part of the country though this time it was rather hard physical work with not much leisure time for birding. I would have liked to have seen the Polgigga Hoopoe but time was against me. By way of compensation for the lack of birding at least I got to treat myself to the Great Spotted Cuckoo on the way down.
Posted by Adam Hartley (Gnome) at 20:47 No comments:

As I said yesterday, I wasn't going to have much opportunity to go out birding and with plenty of DIY to crack on with for both my VLW and myself it was another low key day.


Fortunately the weather was much better today though predictably it started off with some good old Pendeen fog. However, by mid morning it had all burnt off leaving a gorgeously sunny day with very little wind. One forgets just how lovely it is down at Pendeen when the weather is really good - I really wouldn't want to be anywhere else in the world. I took a little break after lunch to wander about a bit with my camera and managed to take some snaps of the local birds with my superzoom camera. There were some nice Chiffchaffs by the coast path pool, the two Ravens seemed to be chasing a third bird off their territory and I spotted a Peregrine down by the cliffs. 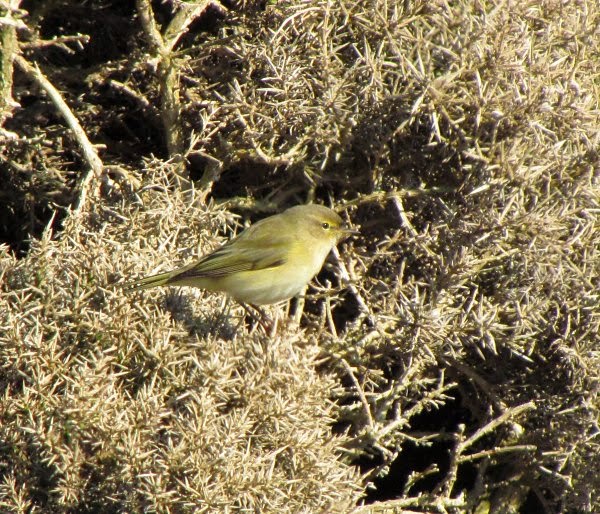 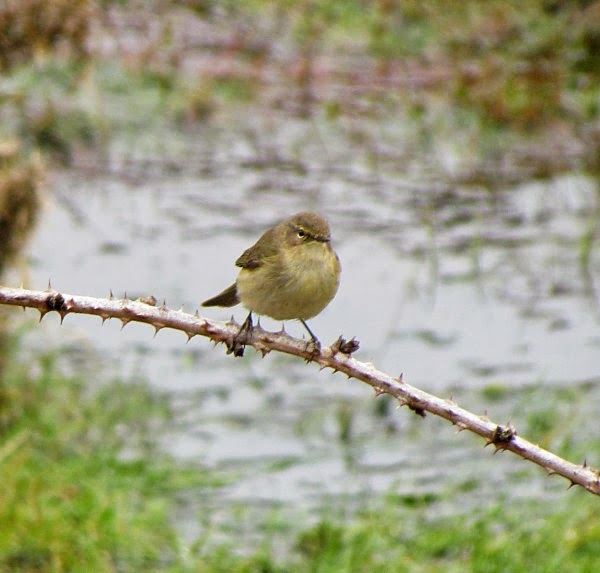 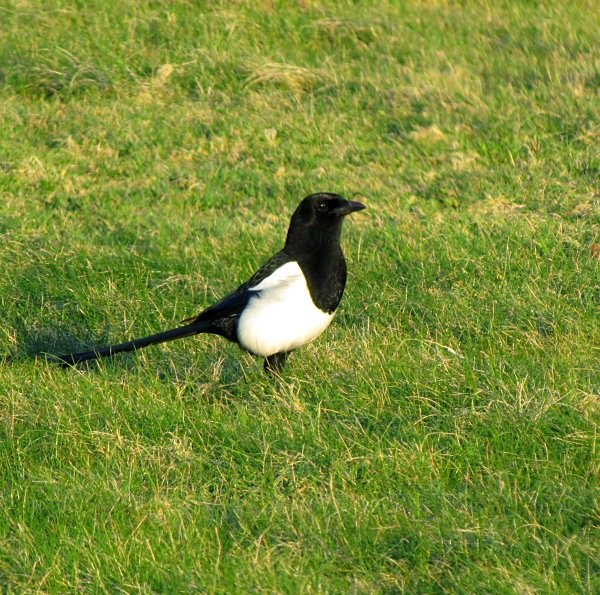 Late afternoon we realised that some of our paint had gone off so I made a quick dash over to PZ while my VLW and L went for a walk down to the local cove. After having bought the paint I checked in on RBA only to discover that the Hoopoe which had been knocking around Polgigga for the last few days had been located and was showing well near the turn-off for Trebehor. I was tempted to make a little detour to see it but it would be a good twenty minutes to get there and then another twenty minutes back to the cottage from there and it was getting late so in the end I just went straight back to Pendeen. There I met the rest of the family on their way back from their walk. They'd seen a pod of Porpoises or Dolphins which they'd followed back to the lighthouse so I went to take a look for myself and soon found them feeding opposite the lighthouse. From what I could tell (though I'm not expert) they were mostly Porpoises though there seemed to be one Dolphin in amongst them. I even managed a few snaps with the superzoom. 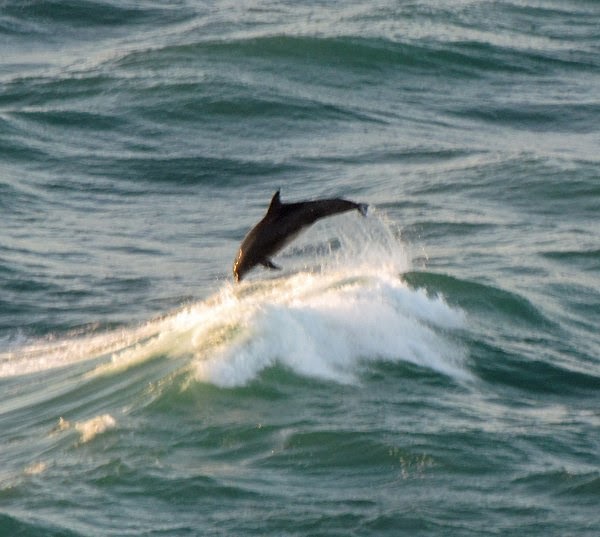 Usually on my trips down here I make sure that I manage to get in some good local birding in between DIY tasks but on this occasion I had lots that needed to be done and only limited time in which to do it so birding opportunities were going to be very limited and confined to Pendeen and its environs.


I awoke to a thick Pendeen fog this morning but despite the conditions still decided to crack on with my exterior decorating. I worked hard all morning and managed to cover a good bit of what I wanted to do that day. One advantage of working outside is that one can keep tabs on what's going on in the area. I soon heard the local Ravens cronking away and kept hearing a Golden Plover type of call coming from some nearby field. Now anywhere else I'd be content that it was just a European Golden Plover but as this is Cornwall I thought that I'd better investigate in case it was a rarer vagrant so after lunch I decided to go for a quick look for it before my afternoon decorating session. Fortunately it called periodically and I was soon able to locate it sitting forlornly and fog bound in a field on the footpath to Lower Boscaswell though disappointingly it was just a Euro GP after all. There were lots of Chiffchaffs about, calling in the stream valley and around the pool on the coast path, they seemed to be everywhere. That evening I went into PZ to do some shopping and then to pick up my VLW and L who arrived on the evening train.


On the moth front I found a rather faded Dotted Border by the front porch this morning as well as another Red Chestnut and a rather striking looking Caddis fly. 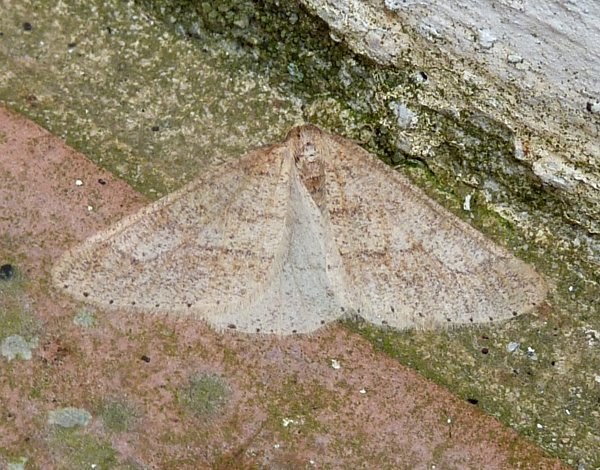 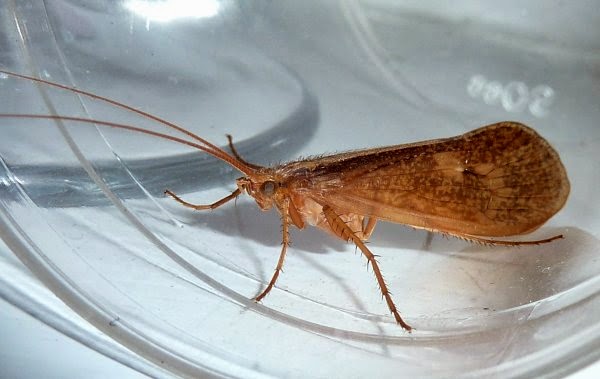 I'm back down in my beloved Cornwall for a long weekend of intense decorating. With the persistent windy and rainy weather having finally moved on and a spell of high pressure forecast I was taking the opportunity finally to get some of the exterior rennovation done on the cottage before our first guests arrived at the start of April. The plan was that I'd go down on Thursday with my VLW and our son L coming down on the evening train the next day. We'd then stay until either Sunday or Monday depending on how the work went.


With a solo car journey ahead of me naturally, I cast around for something good to stop off for en route. The only thing of note that I could find was the Great Spotted Cuckoo near Tenby in darkest Pembrokeshire. This was quite a detour (more than two hours each way) from my route and in the past I'd have balked at such a plan but in this case there was nothing else on offer and it was very quiet down in Cornwall itself so I thought that I'd take the trouble to go out of my way for this as it was probably the only decent bird I was likely to get during the visit. Of course, there was also the added incentive that this was a Great Spotted Cuckoo after all - not something that one is able to see every day of the week.


Thus it was that having packed the car the previous night I set off shortly before 8am into what turned out to be a blanket of thick fog that was shrouding much of the country. Fortunately visibility wasn't too bad, especially once I got onto the motorway and I was able to make good time, finally arriving at Penally station car park at around 11:30 a.m. (as predicted by the RAC website). En route I'd had a couple of encouraging "still present" RBA texts come through so I was in an optimistic frame of mind. As I approached Penally itself I could see the silhouette of a group of birders standing on a mound over on the golf course - at least there wasn't going to be a problem with locating the twitch. I tooled up as quickly as possible and hurried towards them, noting a singing Cetti's Warbler in some scrub as I went. Penally golf course with Tenby in the distance


There, in amongst the dozen or so birders there I met up with Terry Sherlock (from Oxon) who'd come down for first light though the fog then had been so bad that it had taken two hours longer than it should have done. It turned out that the bird had been seen regularly and well up until about five minutes ago before it ducked down behind a hillock out of view. I joined the group in waiting for the bird to appear. Terry showed me some gripping photos off the back of his camera whilst we waited. It's always nerve racking in such situations - everyone else had already seen the bird and was relaxed about it whereas I'd come a long way out of my way and really didn't want to go home empty handed. After about half an hour (though it seemed much longer) it flew out of its hiding place and perched in a gorse bush about 75 yards away for several minutes. Relieved, I quickly rattled off some digiscoped snaps. 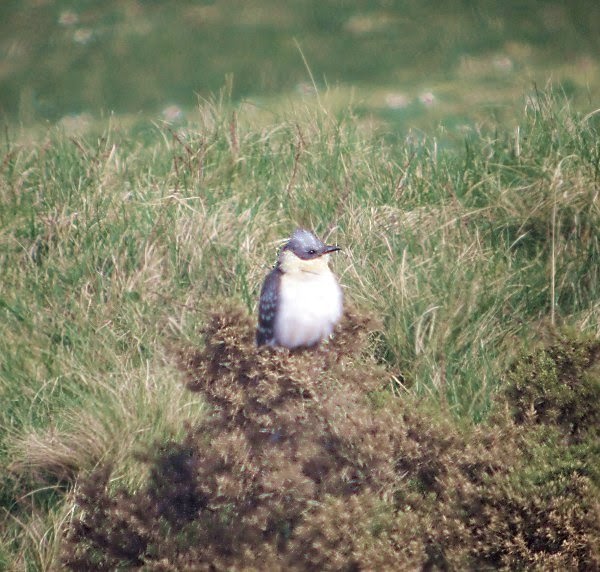 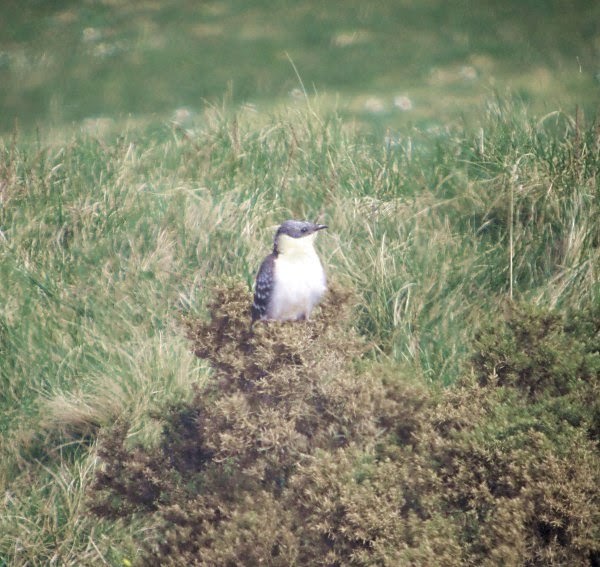 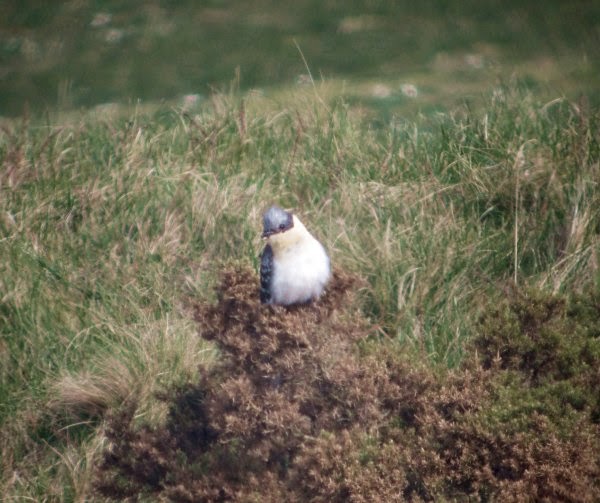 After that it was a case of following what turned out to be a very mobile bird around the golf course, taking care to keep to the paths and not to disturb the golfers though they seemed very relaxed about it all and were keen to know what we were all up to. We got regular views of it as it worked its way around the place and in the hazy mist I endeavoured to take some more snaps though none of them came out particularly well. In fact it took a remarkable amount of Photoshopping to get them even looking like this. The bird would regularly be harried by the local magpies and we would be treated to great flight views as they moved the Cuckoo on. 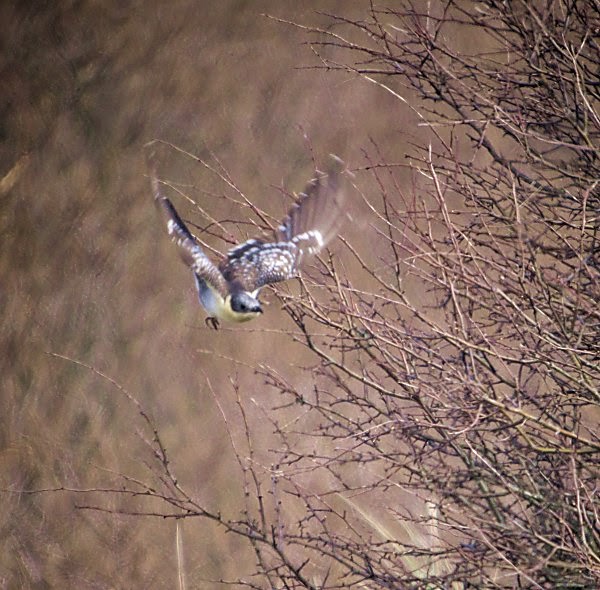 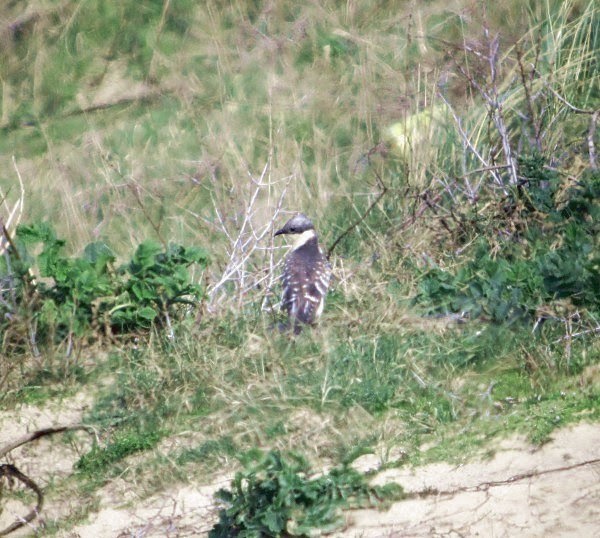 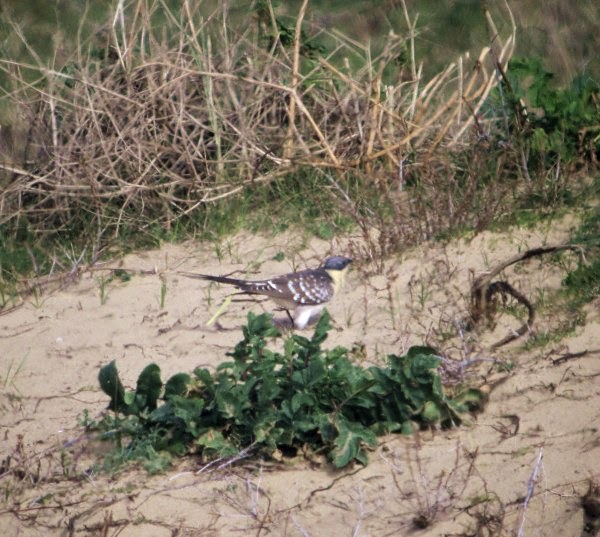 After a couple of hours I decided that with a long journey still ahead of me I couldn't afford to linger any longer so I made my way back towards the car, again hearing and this time actually briefly seeing the Cetti's Warbler. It was supposed to take five hours from there down to Penzance and I was wondering how well I'd cope given that I'd already done three and a half hours on the road that morning but in the event it was fine and I did the whole leg in one go with the radio for company to keep my spirits up. It was remarkable how foggy it was once I got to Cornwall itself and for the entire length of the county it was fairly thick. Once in Penzance I stopped off at a supermarket for provisions and then headed over to Pendeen where of course the fog was even thicker. I unpacked the car to the accompaniment of the fog horn and hurried inside to boot up the cottage. It was good to be back down 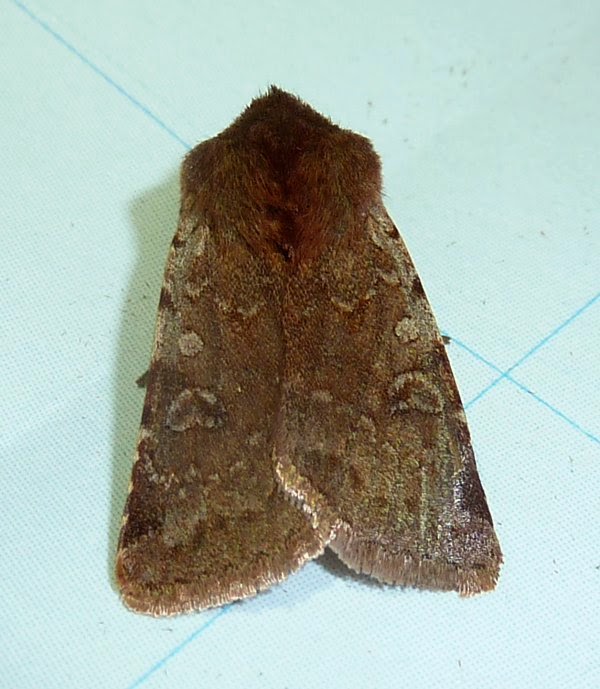 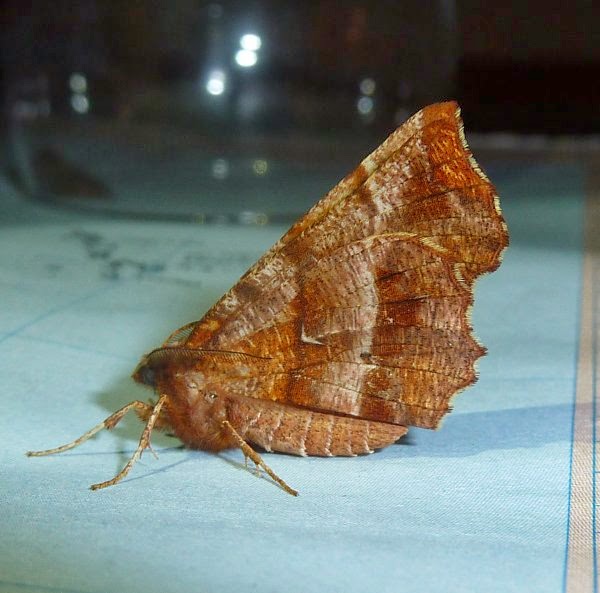 I didn't bring my moth trap down with me but as it was foggy (which seems to be good for moths) I left the outside light on and soon attracted several Red Chestnuts (thanks to John Swann for the ID correction) and an Early Thorn.
Posted by Adam Hartley (Gnome) at 12:51 No comments: