As regular readers will know, we're doing up a cottage down in Pendeen and having not been down for a few weeks, it was time to return there to check up on what the builders had been doing to the exterior and to do a bit of work on the interior ourselves. The plan was that I would go down on Thursday and then the rest of the family would come down on the train on Friday night for the weekend.

I myself set off from Oxford shortly after 9am on Thursday morning as I wanted to drop in on some birds en route. Specifically there was the small matter of the first winter green heron at the Lost Gardens of Heligan that it would be rude of me not to visit and with the roads nice and clear I arrived there at around lunch time to find the weather down in Cornwall gloriously sunny and warm. I'd been prepared for cold conditions and found myself rather hot with all my layers on. At the entrance gate I enquired about the heron and was told that it was at the top pond today. This was how twitching should be: definite news of the exact location and even a map to show you exactly how to get there, well worth the £10 entrance fee! Some ten minutes later after a nice walk through some woodland and then down a little hill I arrived at what was a remarkably small pond. At the bottom end on a footbridge were a few photographers who told me that the bird was working its way around the pond and was just behind some reeds at present. After that it was just a matter of matter of waiting a few minutes while it worked its way out of the reeds and then trying to find the best angle to view from. The bird was regularly catching small fish so was obviously being well fed and I wondered whether it might actually try to over-winter there, only time will tell. This must be one of the most photographed herons in the country but here are my digiscoped efforts. 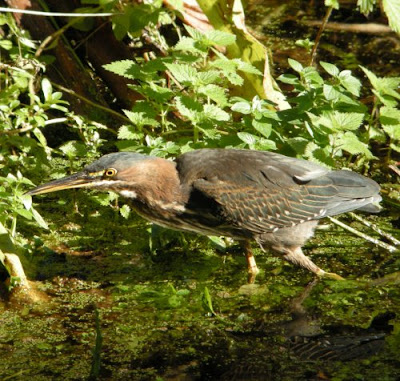 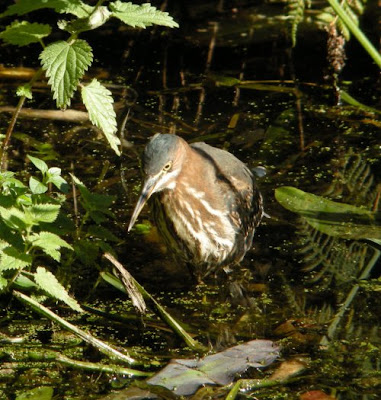 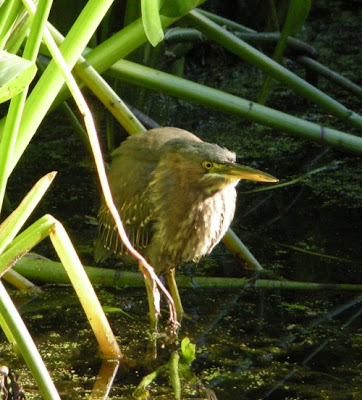 I also took some video footage of the bird

After that it was on to the Penwith peninsula. I briefly dropped in at the Leylant Saltings platform for a scan across the Hayle estuary where there were supposed to be a spoonbill and some whooper swans hanging around. There was no sign of either though I did meet a local birder and I took the opportunity to ask him about the buff-breasted sandpiper that was at Sennen. He told me that it was hanging out with a flock of golden plover but that you can't see all the field from the official viewing point. Armed with this information I went off to Sennen and a short while later pulled up at the Trevedra farm entrance and walked down the farm track to the second field. Apart from a few loafing gulls there was nothing to be seen. What was apparent was that the field had quite a slope on it and one could only see part of it from this vantage point at the bottom end. Whilst I was there another party of people came, enquired about the bird and on hearing that it was nowhere in sight, went off again. Shortly after that a large flock of several hundred golden plover flew in, circled for a while and then landed on the hidden part of the field. Whilst they were flying I scanned the flock carefully but there was no sign of any smaller hangers-on. Having done my research (i.e. looking at Google Earth before I set off) I knew there was another farm track on the other side of the field so I duly set off there and from this vantage point I found that I could see the plover flock perfectly. There was no sign of the sandpiper initially but after a while it flew in calling loudly, landing quite close to me some thirty yards away. Although I was facing directly into the sun I adopted my usual "if I can see it I'll try to photograph it" approach and rattled off some digiscoped shots before it moved further away. 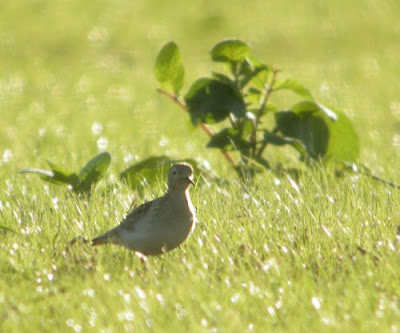 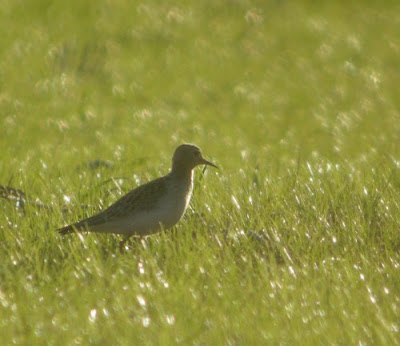 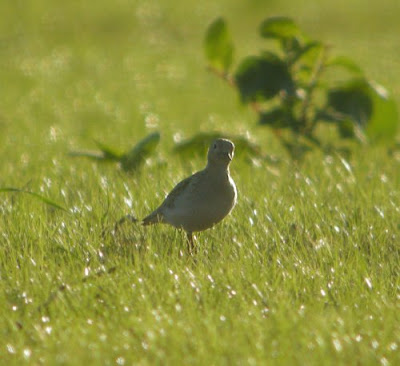 The Sennen buff-breasted sandpiper, all digiscoped into the sun so the bird is very back-lit
After having failed to connect with the Davidstow bird on a couple of occasions it was nice to see this bird comparatively easily. As I was returning to the car I met a fellow birder who said that the third winter Azorean yellow-legged gull, which had been hanging around the area for a while was also in the same field best viewed from the other track so I went back for a look. There was one gull which could have been it but before I could give it a good grilling a helicopter flew over and put up all the gulls. At this point I decided to call it a day so I drove off to Pendeen, unpacked the car and headed over to Tesco's to get some provisions for the duration of my stay. It had been a great start to my Cornwall visit.
Posted by Adam Hartley (Gnome) at 07:00