I had a meeting on site at 9:30 with the builder so I thought that I would nip down to the Lighthouse for a spot of sea watching before hand. It was a very bright sunny day and with the sun directly behind me the birds were all nicely lit and showed up well even at 1/2 and 3/4 distance. I had wondered whether there would be much about but there was always something going by even though it was just common stuff. Eight or so manxies went through and there were plenty of auks zipping past. I was looking out for little auks and did spot one which looked smaller. It even caught up with a line of slower auks so that I reasonable size comparison was possible but it was not small enough for a little and was probably therefore a puffin.
Back at the cottage there was much to discuss: some radiators had been installed in the wrong place and they were that afternoon about to install the oil storage tank on a piece of land that we didn't even own - thank heavens I'd actually come down when I had! Anyway all this took up the rest of the morning so it wasn't until early afternoon that I found myself free again for some birding.
There was not much of particular note about in the area at present so it was a case of doing the rounds of the local spots to see what I could find. As part of my local birding education I was keen to visit some spots that I'd not really visited before so first port of call was Kenidjack Valley, in particular the sewage works, where I reasoned any remaining small warblers were more likely to be hanging out. On the way down the valley I came across a tit feeding flock and I scanned around for some more exotic hangers on though all I could turn up was a goldcrest. I walked down to the hamlet near the ruined chimney before heading back up again. 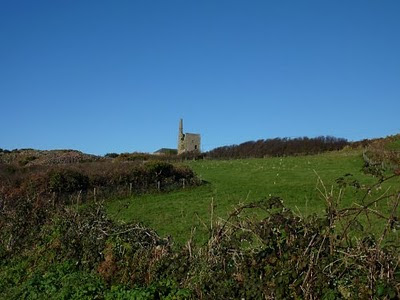 Classic Cornish landscape shot in the Kenidjack Valley
On the way back there seemed to be more bird activity by the settling tank and I found a grey wagtail, two pied wagtails and a single phyllosc. which immediately had me thinking tristis. It had a very pale white underside (á la greenish warbler), black legs, green tinted wings but paler brown upper body and head. It had a very faint single buff (not white) wingbar which I suspect only showed up because of the very bright light. Unfortunately it never called but it looked just like the comparison image of the tristis next to the greenish warbler in my Collins!
Next on to Sandy Cove at Newlyn where a slavonian grebe had been reported regularly each day. I managed to find a great northern diver but could not find the grebe though a local later told me that he'd not seen it in three visits down there which made me feel better about not finding it! A quick stop off at Jubilee Pool though it was, as I suspected, too early for any roosting sandpipers. Next on to Long Rock beach car park to scan the bay. There was another great northern diver quite close in but nothing else of note so I moved further along to Marazion beach where fortunately there were plenty of parking spaces at this time of year. There I passed a very pleasant three quarters of an hour watching the waders who were very close now that it was approaching high tide. The sun was shining a wonderful golden yellow (it was what photographers call "the golden hour") and the birds were very approachable. There was a good number (a couple of dozen) each of dunlin and sanderling, a single redshank and a single knot. with the odd ringed plover dotted along the beach. I met a local birder and we scanned the bay together for a while and he managed to pick up a distant red-throated diver over towards St. Michael's Mount. He also spotted a black redstart further along the beach hopping on and off the wooden posts. 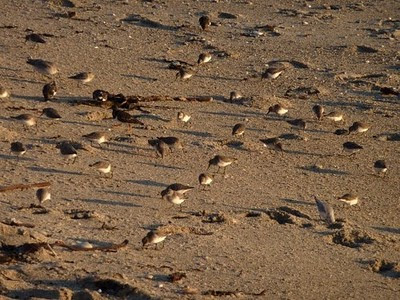 Golden waders (taken with my point & shoot camera). You can just make out the knot in the top left hand corner. 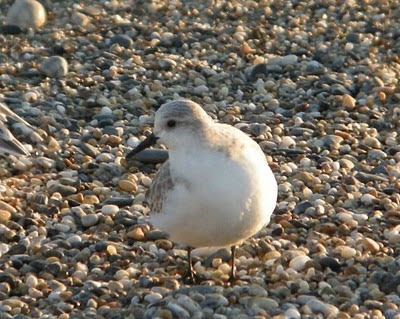 Digiscoped sanderling - they are such lovely looking birds 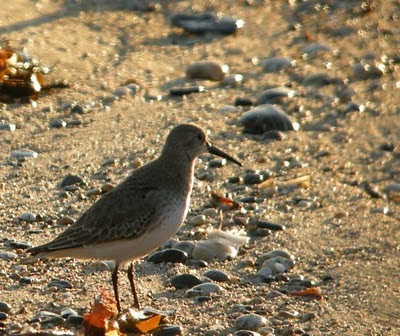 
Some video footage of the sanderling

Once it started getting dark I headed back to Long Rock Industrial Estate to pick up some bathroom brochures and to chat to the people there about what we were looking for for the cottage. It was not quite fully dark when I finished so I nipped back to Long Rock pool where there were a couple of birders waiting to see whether any bitterns would come in to roost there (apparently there'd been four there the previous evening). It turned out I'd missed one by twenty minutes and no more came in. Whilst I was there I got chatting to a local birder who soon asked if I was Adam Hartley! Amazed, I said that I knew that Cornwall was a small community but that was still quite impressive. It turned out that he read the Pendeen Birding blog and had worked it out from my saying that I was renovating a cottage at Pendeen. We had a good chat and he told me about a red-necked grebe that was currently at Carbis Bay and how to get there. He also asked whether I was thinking of compiling a Cornwall county list and I confessed that it had crossed my mind. I'd found myself thinking of county ticks when spotting even common stuff such as mistle thrushes etc. He told me that some common birds such as treecreeper and nuthatch are hard to find at this end of the county so I would have to go further up to get those. Eventually it got too dark for any more bitterns to come in so I headed back to the B&B for a cup of tea, followed by a pub meal and another hot bath.
Posted by Adam Hartley (Gnome) at 09:20