Last time I was down in Cornwall I had arrived just in time to stop the builders installing our oil central-heating tank on a piece of land that we didn't own. We'd agreed a more appropriate site for the tank (on our land!) and they were going to build a little bunker for it so that it was tucked nicely out of sight. I'd assumed that this was all going according to plan but at the end of last week I got a phone call from one of our new neighbours (who was from Oxford and whom I actually already knew) complaining about the location of the new tank. It soon became obvious that I would have to go back down to Cornwall again to check up on what had been done on this front as well as to discuss general progress with the builders.
Naturally enough my thoughts had turned to birding whilst down there though the weather forecast was rather poor with just one decent day of weather predicted for Tuesday. I'd originally planned to go down on Monday, spend Tuesday morning seeing the builder and then birding like a demon for the rest of a day before going back home on a rainy Wednesday. Unfortunately a work-crisis chose that moment to rear it's ugly head which put my plans back a day. This meant that I would be travelling down on the one decent day for weather so I decided to leave nice and early in order to get as much fair-weather birding in as possible. I was particularly keen to try and see the over-wintering pacific diver which had been around for a reasonable amount of time now in Mounts Bay. In addition I'd looked to see if there was anything tempting to stop off at en route but the only thing that I could find was a drake lesser scaup at Drozmary Pool in Cornwall which was conveniently located right next to the A30 so that I would be passing right by it.
I set off at around 8:30 am and by midday I'd arrived at Drozmary Pool. Although I'd not visited this venue before, I'd done some research using Google maps so I knew where to park. Just as I arrived a couple of birders were returning to their car and it turned out that they'd spent some time looking for the bird without any luck and had even walked right round the pool in order to get on the right side of the sun so that they could check every last bird. My general policy in such situations is not to spend too much time re-checking if someone else has already looked so I just made a very quick scan of the birds present: a dozen or so pochard and tufties, a few teal and a single goldeneye. If it wasn't there then there were more pressing birds to be seen down at Penzance instead and I soon resumed my journey, arriving at my destination at around 1:30 pm. Given that it was quite sunny I thought that it would be best not to start off at Marazion or Long Rock as that would involve looking into the sun. Instead I started off at Sandy Cove in Newlyn and decided to work my way around the bay so that I would end up at Marazion at the end of the day.
There was not a great deal of wind in Mounts Bay and viewing conditions were pretty ideal. I spent some time scanning carefully as divers spend so much time underwater that it's very easy to miss them. The results of my efforts were: two great northern divers, 1 black-throated diver and a few guillemot. A local birder (C. Barnard I think from the CBWPS reports) turned up for a while and picked out a passing Med. gull. After a while I thought that I would take a brief stroll along the track just to stretch my legs after all the driving and as well as the usual resident rock pipits I managed to find a lovely firecrest working its way along the bushes at the base of the cliff for my troubles.
Next it was on to Battery Rocks by Jubilee Pool. I was just setting my scope up when I heard a familiar squeaking sound which turned out to some purple sandpipers working their way along the shoreline. There were also several turnstone working the rocks and a single great crested grebe which I later learnt is quite a rarity in this part of the country. Turning my attention to scanning the Bay I soon spotted several divers concentrated near Long Rock beach. Whilst they were a little distant, the sun was directly behind me and the sea was calm so viewing was pretty good. I soon determined that there were a couple of great northern divers and at last there was the pacific diver. I also spotted something very small diving away frantically at the edge of the surf which must surely be one of the smaller grebes though at that distance I couldn't tell which one so it was clearly time to move round there to get a closer look. 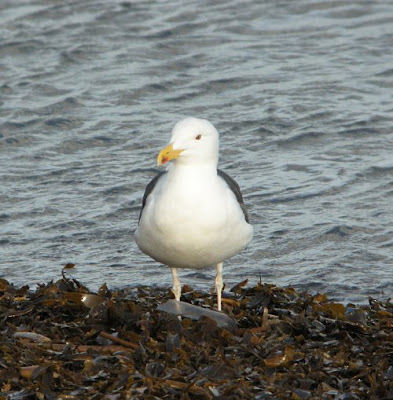 I was more interested in finding the pacific diver than doing any
real photography today but I did quickly take a digiscoped snap of this
greater black-backed gull... 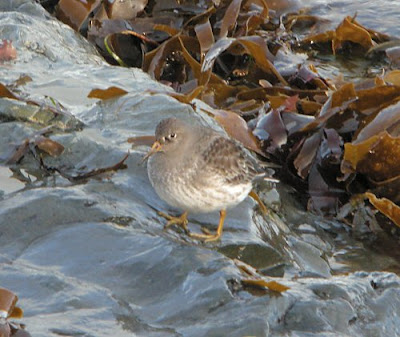 ...and I couldn't resist a shot of the squeaking purple sandpipers by Battery Rocks.
At Long Rock beach as well as the three divers, I found an eider duck showing well close in to the shore. I wandered along the beach and eventually managed to track down my grebe which turned out to the a Slavonian. I also had a rather confusing conversation with a passing dog walker which went along the lines of:
Dog walker: "is that the Scillonian?" (referring to the big ship out in the bay)
Me: (mis-hearing it as "Slavonian") "yes, it's a Slavonian"
Dog walker: "hang on it can't be, it's in the dock"
Me: (surprised) "there's a Slavonian in the dock as well? I'd not heard about that one"
Dog walker: "it's always there over the winter"
Me: "I must go and take a look to see if I can find it"
Dog walker: (puzzled) "it's always moored in the same place"
At that point I twigged!

I took some record-shot quality video footage of the pacific diver.
You can just make out its chin-strap and flash-free flanks.

I also shot some footage of the eider duck which was conveniently close.

My final stop was Marazion beach where, whilst waiting for the bittern to show, I chatted away to Dave Parker and another birder about Cornish birding past and present. It turned out I'd missed the only bittern flight that evening already but by the marsh I managed to see a couple of oystercatchers, a little egret, a buzzard, plenty of snipe and the ever-present rabbits. Over on the beach there were the usual sanderlings, yet another great northern diver offshore and a couple of stonechats.
Once it was dark I headed over to the B&B where I was staying again (the cottage was still a bit of a building site). After a quick cup of tea with my hosts I nipped across the road to the Radjel Inn for a very nice chicken curry and a pint before heading back for a hot bath and an early night. It had been a long but very successful day. With the forecast for solid rain for the next couple of days I was glad that I'd managed to get in a good afternoon's birding around the Bay. As I drifted off to sleep I wondered, given the forecast, what birds to go for over the remaining two days.
Posted by Adam Hartley (Gnome) at 19:54