Whereas yesterday had been sunny and calm, I awoke today to find it much more cloudy and more breezy. Whilst the wind wasn't too unmanageable, it had shifted around to a more southerly direction and it just felt a little more exposed when doing the rounds this morning. It was hard work again today with very little reward for my efforts. Sure, there were the two Raven and two Chough and I managed to get Buzzard, Kestrel and Sparrowhawk today as well as a few Stonechat and Mipits but it just felt difficult and the birds weren't at all showy. Up at Calartha Copse I'd almost given up on the Yellow-browed Warbler when I spotted it flitting about in the bushes of a neighbouring garden briefly. In the end it was a relief to get back inside the cottage to warm up and have some breakfast.

Our plan for today was to do a spot of DIY first of all. Sadly, it seems impossible to come down to stay in our cottage without having to do some general maintenance of some kind and this time it was the exterior windows which were in desperate need of our attention. My VLW and I worked away at them whilst our son binge-watched some children's TV serial until around lunch time when finally some bird news came through on RBA: "adult winter Franklin's Gull at Hayle estuary from the causeway". Whilst this was defintely something interesting, it was reported a full hour and a half ago so the bird could be long gone by now. Still with nothing else to go for when it came to planning our afternoon excursion I suggested that we might do something which incorporated an attempt at seeing this bird. My VLW was quite keen to explore the shops at Hayle, which she'd not really looked at before so in the end we headed off with this as the plan. We'd just got to about half way to Penzance when "no further sign of Fanklin's Gull" came through on RBA. Hmmm, we started to think about some alternatives to our plan and had just decided to go there anyway for want of anything better to do when "still present in a field viewable from the causeway though distant" came through. Game on again!


Some fifteen minutes later we arrived at the causeway and I parked up and hurried to the small crowd of assembled birders whilst my VLW and our son headed off along the road towards Hayle. The tide was right in at the moment and the birds were all huddled up at the southern end of the estuary near where we were standing with the immature Spoonbill the pick of the bunch in a very brief scan. It turned out that the Gull had been seen right in the far distance on a hillside where there were a relatively modest number of Black-headed Gulls picking their way over a field. I later measured the distance on a map and it was a good 2 km away. Alex M, Brian D and Linton P were there - the latter had it in his scope and let me take a quick peek where the dark mantle colour and half-hood really stood out from the Black-headed's even at that distance. I tried to find it in my scope and had it briefly though it soon moved out of sight below the line of trees that were partly blocking the view.


At that moment I got a call from Dave Parker saying that some people were watching the Gull from the side of the road on the way up to Carbis Bay. I relayed this information to everyone else there and we all hurried back to our cars and set off in convoy. The traffic was painful but we eventually arrived at the obvious twitch spot with cars piled up on the verge everywhere and a dozen or so birders all scoping the distant hillside. Here, the distance was a little less that 1km and the whole field could be viewed with the Franklin's relatively easy to pick out. I had an attempt at digiscoping it though at that distance and given the rather sunny conditions my results fall firmly in the record shot camp. 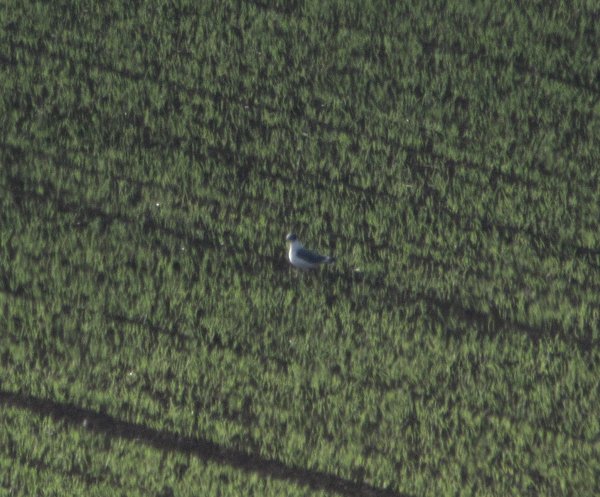 It was good to catch up with everyone else there with P&H, Dave C, Tony M all in attendance as well as Dave P and various local birders were arriving all the time. Having seen the bird decently enough (it's a good thing a Franklin's is  relatively easy to pick out even at that distance - imagine if it had been a Bonaparte's!) and with no prospect of the views getting better, I didn't linger but instead headed back to the car where I drove the short distance back to Hayle to rendezvous with the others. They apparently had had a good time and even had a couple of purchases to show off. We next headed over to M&S to make use of the café and to do a spot of shopping before returning to the cottage for the evening. After a nice evening meal courtesy of my VLW we settled down to watch the Great British Bake Off final, then to play cards for a while before turning in for the night. It had been a good day in the end with Franklin's Gull being yet another Cornish tick for me.