We decided as a family to head back down to our beloved Cornwall to see the New Year in and we'd invited my VLW's two brothers to join us as well. As the previous day we all had a family party to attend just over the border in Warwickshire it made sense for them all to come back to our place in Oxford for the night before we all headed off to the South West the next day. Our intention was to leave for Cornwall at 9 a.m. the next day but with the usual inertia that accompanies a large group it wasn't until after 9:30 that we finally left. Mercifully the traffic was light and we made good progress arriving at Penzance in just over four hours as usual. There was some quite heated debate in our car about what to do when we got there. I had pointed out that as we only had two or three hours of daylight left and that we were only down for a few days then it made sense to go and do something first and then get the shopping in once it got dark. I proposed Mousehole as an option, partly as we all like pootling around there and of course partly so that I could get to see the Eastern Black Redstart that had been lingering there the past couple of weeks. Eventually this was agreed and we headed off there, deciding to bite the bullet and park in the Rock Pool café car park to save time. The other car with my two brothers-in-law were only a few minutes behind us so whilst the others waited for them to arrive, I headed down to the shoreline beneath the café to look for the bird with L our ten year old son in tow. I explained to him what I was looking for but initially couldn't see it at all. Suddenly L exclaimed "there it is, there  it is!" and pointed on the beach though as hard as I tried I couldn't see where he was pointing until a small bird flew up and over the low cliff there into a garden. I hadn't really got anything on it as it flew so quizzed L closely as his knowledge of birds is vague to say the least but he seemed convinced. I left him scrambling around on the rocks and headed further along until I reached the boulders along the foot of the harbour car park which I scoured carefully. I knew that the bird had occasionally been seen along the southern quay instead but I didn't have time to check there now and had to hope that it was still somewhere between the north quay and the café though there'd been no report on it on RBA at all today.


Having drawn a blank on the outward journey I turned at the harbour wall and started to head back. I'd just left the car park when something small, and reddish with a quivering red tail flew down onto the path right in front of me. It was the bird of course which showed remarkably well down to a few metres though in the horribly gloomy weather it was hard to get the camera to focus at all. It soon went back to feeding on the rocks and along the strand line and I eventually managed to get some shots off. It was truly a delightful bird - one that I've been coveting from afar for some time now, what with the one at Cleveland and then the one at Tewkesbury Abbey that I would have gone for had it stayed one more day. In fact I do wonder if this is not the same bird as the Gloucestershire one which has moved as far down south as it was able to go and finding a nice sheltered beach spot has elected to stay. I showed a photo to L who assured me that that had been the bird that he'd seen so there's some hope for his birding prowess after all. 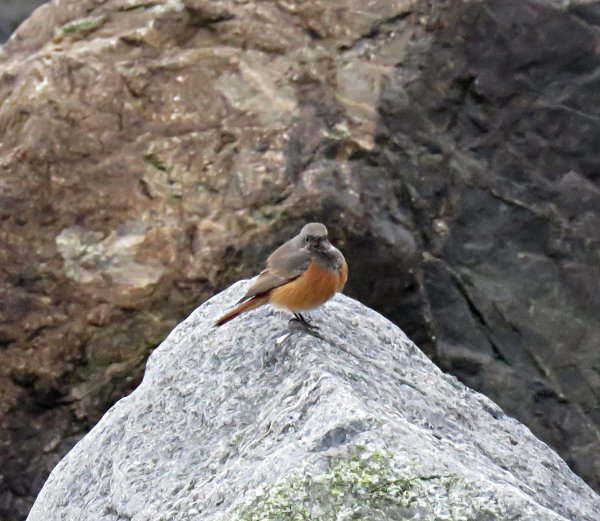 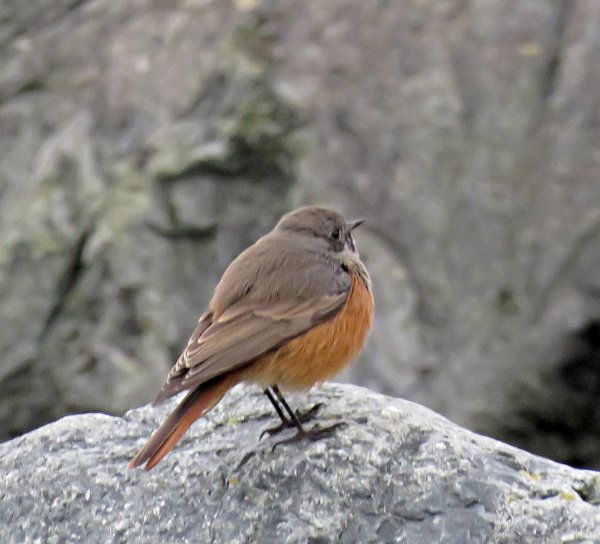 I was soon called away from my appreciation of this eastern gem by a phone call saying that the others had arrived and that they were all in the café now so I went to join them. Unfortunatley it was rather busy there today so the service was a bit slow and they never actually cleared our table of the previous occupants' stuff but we were thirsty after our long drive down and didn't really mind.

After our refreshment we headed back down to the footpath and walked along to the harbour. I tried to show them the bird but there was no sign of it as we walked past its favoured spot. In the town we wandered around peering in the shops and the children all bought tiny pewter mice from a little shop on the southern side. We noticed that the harbour itself was closed with a series of wooden planks along the narrow harbour entrance keeping it all clear of boats so that their Christmas light display could be installed. It all looked very impressive so as it got to dusk we hung around to see if they would light it up but in the end it got rather dark and started to get cold without any sign of the lights so we reluctantly headed back to the car. This time the bird was back on display and I showed it to the others though the light was pretty terrible by now.


Our next stop was over to Sainsburys for our shopping. Whilst the others went inside I took L over to Marazion beach for some reconnaisance work. The previous time that we'd been down we'd seen in the New Year there on the beach but I'd read that loads of spratts had been washed up on the beach (creating a bit of a gull feeding frenzy in the process) so we were a bit worried that it might be rather smelly. L and I wandered around on the beach a bit but we couldn't actually find any spratts so I guess that the gulls had cleaned it all up though there was a distinct fishy aroma which wasn't normally there. Just as I got back to the car four Grey Herons flew over us and then westwards along the beach. We headed back to Sainsburys where I filled the car up with petrol and then we picked the others up  before heading over the hill towards Pendeen to open up the cottage. It's always with some nervousness that I first approach the cottage each time as in past visits sometimes something has gone wrong, either the heating or the electrics or something. This time the only issue was our outside light which seemed to have been knocked off the wall. Thinking about it later, it was probably our neighbour who'd helpfully put up some tower scaffolding there and the blowing wind had probably done the rest. Anyway, the cottage was looking fine and we busied ourselves with unpacking and getting a meal together.


After dinner we had to plan what to do and once more there was a certain amount of inertia involved. Eventaully we agreed on driving over to Mousehole again to see the harbour lights before heading back to the cottage to see in the New Year, perhaps  with a glass of champagne down on the beach at Boat Cove if we felt adventurous enough. The Mousehole lights turned out to be pretty impressive and we wandered around admiring them for some time. The others went into the Ship Inn to sample some of the local ale though L wasn't keen to go in (there was a rather loud band playing) so in the end I stayed outside with him whilst he played on the beach. The others soon came out again suitably refreshed and we headed back to the car and home to the cottage. 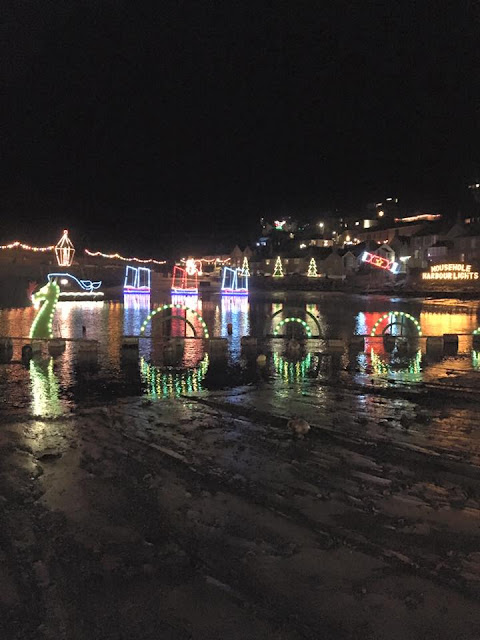 Arriving back, the wind had strengthened notably and in the end the lure of the warm cottage proved too much and our beach plans were shelved. We saw in the New Year watching Jules Holland on the TV whilst sipping champagne before heading to bed.