We all decided to have a bit of a lie in this morning after our long journey down so it wasn't until mid morning that we'd fully surfaced. There were really strong winds forecast for today though fortunately with much warmer temperatures which should just touch double figures at their peak today - such a contrast from yesterday! We started off by doing a thorough inspection of the cottage and compiling a list of all the things that needed to be done. My VLW then went about doing some general cleaning whilst I got distracted by a whole succession of work-related phone and Skype calls which kept me busy until lunch time. The only Pendeen birds that I spotted was a single Raven and a single Chough. The sea was quiet with just a few Gannets hunting in the bay just west of the Watch.


After lunch we decided to head over to Hayle. My VLW wanted to explore the antique shops there and I was keen to take a look at the estuary. So we stopped off at the causeway bridge and parted company; whilst she and our son walked onwards towards the town I set up my scope and started to grill the estuary. My main interest in this location was that an Avocet had been reported there for the last week or so. "So what?" I hear you cry but actually down in the Penwith peninsular, this is actually quite an uncommon bird and it's one that, embarassingly, I still needed for Cornwall. As additional inducement a Green-winged Teal was about and had been seen that morning as well as a Glaucous Gull that in fact had been reported less than an hour ago so there were plenty of other birds to look for.


I started from the causeway bridge and soon found a trio of Mediterranean Gulls loafing nearby though there were only half a dozen or so Teal to be seen and there was no sign of the American visitor in amongst them.


Along the river there was a single drake Goosander and the usual Redshank and Curlew and a whole mass of distant large Gulls. Now, one of my  favourite winter birding activities is grilling a large gull flock -  it's what I spend most of my time doing down on my Port Meadow patch back in Oxford. So in the scope-shaking wind I carefully went through each and every one. I couldn't turn up the Glauc though I did manage a couple of adult Yellow-legged Gulls which are probably actually rarer down here than the white-winger I was looking for. Over on the other side of the river there was what was almost certainly the near-resident adult Ring-billed Gull though given the distance I wasn't 100% certain. There was also a Pipit buzzing around with a rasping call that frustratingly would never actually settle for me to get a view. Later in the evening a Water Pipit was reported there and thinking about it, that would fit with what I'd seen and heard. After a while I'd satisfied myself that I'd searched the area thoroughly and decided to head over to Ryan's Field.

Here I met a couple of birders, a rather senior lady and a young lad who told me that the Avocet had been there behind the island a short while ago but unfortunately it was now nowhere to be seen. The lady then asked me to take a look at an Egret at the next pool which she was wondering about so I went to look though it turned out just to be a Little Egret. Back at the main pool there were plenty of Lapwings, a single Shelduck and a few Wigeon but little else so I decided to walk back to the main road to see if the Avocet might be out of sight behind one of the islands. Out of the shelter of the hide the wind did it's best to hinder me scanning the area with my bins but eventually I spotted the Avocet as it swam out from the island area. Relieved, I took a few record snaps of it as well as a Black-tailed Godwit that happened to be within range before crossing the road once more to see if anything new had come in on the main estuary.

On the estuary there were now 17 Dunlin within view which hadn't been there before, as well as a Bar-tailed Godwit but nothing else so I headed back to the Ryan's Field hide in order to get out of the wind. Back there the Avocet was now actually pretty close in front of the hide so I busied mysef with taken some better photo's.. 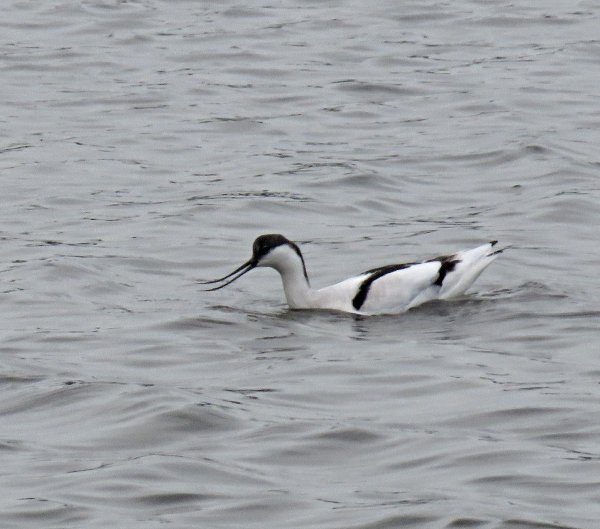 Given the very poor light conditions there was no point in trying too hard with the photos and I soon gave up. I felt that I'd covered the whole area well enough now and with time marching on it was time to rendezvous with the others So I gave them a call and as they'd finished as well I picked them up a short while later in the town centre before heading back towards Penzance. We made a quick detour down to St Erth to look for the long-staying Cattle Egret though whilst we could find half a dozen or so of his commoner cousins there was no sign of the star bird himself.

Back in PZ we stopped in at Sainsbury's for a welcome cup of tea as well as a chance to buy the things for the cottage that we'd decided we needed from this morning's stock-take. Then it was back to the cottage for a meal and a chance to put our feet up after a long but productive day.