Over half term we had a family trip down to Cornwall again. With two out of three children in tow we headed off on Tuesday for the rest of the week.

The birding down there seemed to have peaked on the Sunday before we arrived with loads of goodies (Golden Oriel, Woodchat Shrike, Red-backed Shrike and Black Stork) all being seen on the same day. However, since then it was more like a typical June with not much at all on offer. The first couple of days I spent some time failing to track down the lingering but elusive Black Stork that was being seen occasionally at Rosewall Hill (Buttermilk Hill as the locals know it). Despite putting in a quite a few hours in the end, I never got to see it.

Our stay at Pendeen followed the usual pattern of DIY in the morning and then doing something in the afternoon. We had a family trip to Trewidden gardens and a walk down Kenidjack, around Cape Cornwall and back via Carn Gloose which was nice but offered nothing out of the ordinary in terms of sightings. Still, May and early June are beautiful times of the year down in Cornwall and it was enough just to enjoy the wonderful scenery and what had turned out to be a great week of weather.

Towards the end of the week it turned very foggy at Pendeen and putting the outside porch ("moth light") on brought in quite a few species.

On Saturday some of the family wanted to head into Mousehole for a while to explore the shops and have some tea. After dropping them off I elected instead first to head to Newlyn to see if the long-staying American Herring Gull was around. However despite searching all the usual spots I could not find it at all. At this point I got confirmation from P&H that a Rose-coloured Starling was still present at St Buryan after having first been reported the previous night so I cut short my gull search and sped over there instead. It was very misty at St Buryan when I arrived and parked up in the side road where it had been seen. Still after less than ten minutes of wandering around it turned up, stting first on a telegraph pole and then on a roof-top - classic views! Despite the mist I managed some photos. 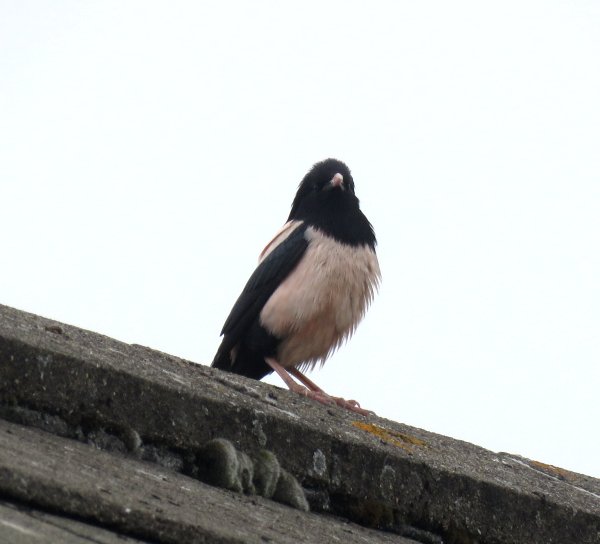 That afternoon we were due to visit my VLW's niece up county a bit but the weather turned rather bad and I started to feel unwell (I was fighting off a nasty cold that our son has had all week) so we headed back to the cottage to start packing up instead.

On Sunday we decided to head back home via Glastonbury (which we'd been meaning to visit for many years) which just happened to be close to Ham Wall RSPB where a certain River Warbler was by coincidence currently on territory. The traffic was heavy all the way up on the A30 and also on the M5 up to our turn off. With a sign warning of hour long delays up ahead we were grateful finally to turn off and head for Glastonbury. I dropped the others off in the city centre and then hurried back to Ham Wall. I was very much aware that I had limited amount of time and as it was now afternoon and getting rather hot, it was possible that the bird (which is known to sing in the night) might well take a siesta. So I hurried along the familiar track towards the twitch spot.

Ham Wall is one of my favourite reserves. This was my fifth visit but each previous time it had delivered in the form of a new personal UK tick. I had this site to thank for Pied-billed Grebe, Hudsonian Godwit, Little Bittern and Collard Pratincole - could I add River Warbler to this list? After a brisk 10 minute walk I crossed the first footbridge over the drain and hurried to join about a dozen or so other birders. The twitch arena turned out to be a length of about 30 yards long, facing towards a reedbed across an area of srub and reeds. I asked about when it was last seen and was told about half an hour ago. I set up my gear and settled down to wait.

There was plenty of other birds to see and hear. With several Cetti's Warblers singing within earshot, a hawking Hobby and regular sightings of Marsh Harriers and Great White Egrets it was a lovely place to be waiting. The only issue was that I knew I was on a tight schedule. After three quarters of waiting with no sighting I was starting to get worried. I knew that the patience of the rest of the family was distinctly finite and I started to contemplate the nightmare scenario of getting "that phone call" from them saying they were fed up and wanted to be picked up, before I'd seen the bird. I had just started to think about when I could come back again when the shout went up that it was flying low down in front of us. I managed to see a large dark brown blob fly towards a clump of reeds with some bare twigs in and a short time later it popped up briefly and started to sing it's weird pulsating whirring song. Just at that moment I got the phone call enquiring how I was getting on. I explained that the bird had just started to show and I would be another three quarters of an hour if that was OK. They agreed and I set about trying to get some photos. The bird was more or less on show constantly at this point, preening in a Hawthorn bush for a while before having another burst of song. The trouble was my auto-focus was really struggling to pick it out in amonst all the reeds and I got shot after shot of blurriness. After a while it moved even closer and sat on an exposed stem, in fact so close the autofocus was registering the reeds behind it. Eventually I zoomed all the way in and managed to fluke a couple of shots that turned out OK. 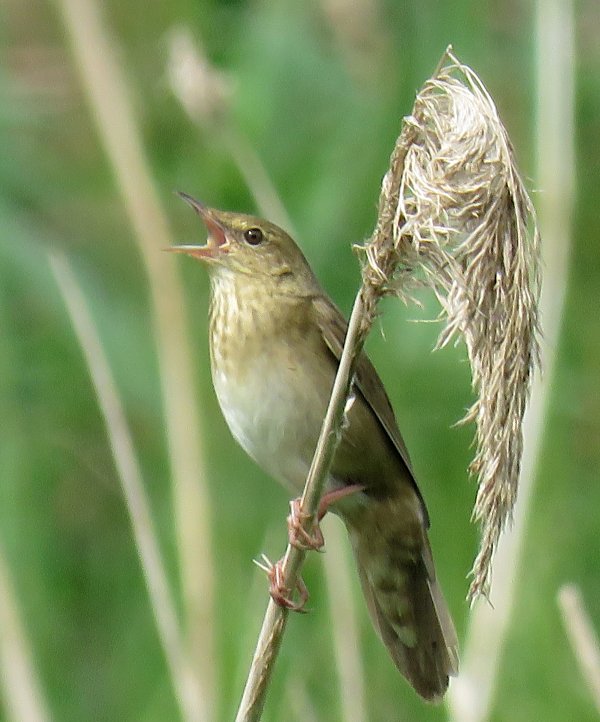 When it disappeared again I decided to head off back to the family. Having snatched victory from the jaws of defeat it was in an elated mood that I retraced my steps back to the car and then drove back for the rendezvous. The others had very much felt that they'd "done" Glastonbury which turned out to be very alternative with all the shops being New Agey of some description. All very well as far as it goes but after wandering around for a bit the others felt that it was rather samey.

With a couple of hours on the road still ahead of us, we chose a scenic route back home that avoided the rest of the M5 and the rest of the journey passed uneventfully. It has been a nice change of scenery down in Cornwall and whilst the birding had been quiet I'd managed to get a nice bird on the way back home which more than made up for it.