I was due to pick up the rest of the family this evening as they were coming down on the train. With the weather misty and rainy, I spent most of the day decorating flat out though come about 4pm it suddenly brightened up and I'd had enough for the day anyway so I decided to head out for a spot of birding, especially as my birding options would be severely curtailed once the family arrived.
I first nipped over to St. Gothian: there had been no further reports of the ring-necked duck but I was hoping at least to catch up with the water pipit there. However, despite carefully scanning everywhere, there was no sign of it and the best I could manage was a Med. gull which flew low over, the black markings on its wingtips marking it out as a 2nd winter bird. I had a quick look around the settling tanks near the first layby there and a bit of "pishing" soon drew a couple of chiffchaffs closer though there was nothing rarer. 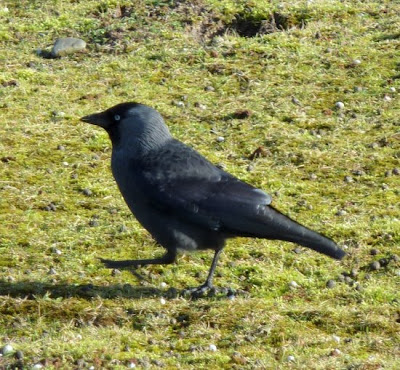 This jackdaw was close enough for me to attempt a point & shoot shot
of it though the strong, low light means that its front is rather in shadow.
Next it was over to Marazion where I still needed to catch up with a bittern for the county list. There had been several over-wintering on the marsh but for some reason I'd always manage to miss them. I arrived to find Dave Parker there and he told me that a bittern had been showing very well along the front of the reedbed not half an hour earlier. Fortunately after a reasonably short period of time it chose to make a reappearance and I was soon enjoying cracking views of a bittern hunting along the edge of the reeds. I stayed until dark at the viewing point hoping to get a glimpse of a cetti's darting between the reed clumps though in the end had to be content with just hearing several birds singing. There was also a "squealing" water rail (again heard only) and a chiffy flitting about in the reeds which kept getting me excited, thinking that it was a cetti's. 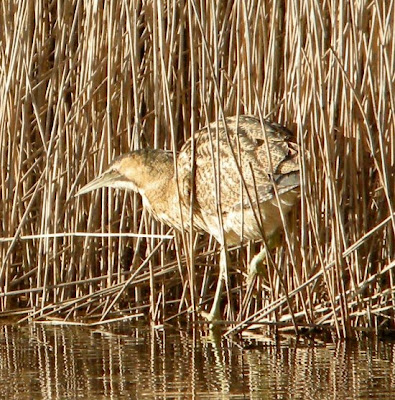 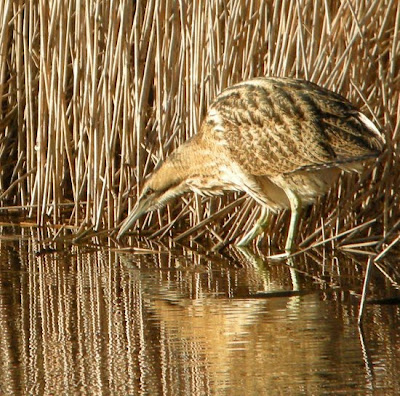 Fortunately the light was really good so these digiscoped
bittern shots haven't come out too badly
Eventually it got too dark to see so I went off to buy some provisions for the family and then picked them up from the station.
Posted by Adam Hartley (Gnome) at 18:09