My niece left reasonably early in the morning so, after applying another coat of paint to some walls, I decided to head out for a quick bit of birding whilst it dried. My destinations were the same as yesterday, namely to Drift reservoir for another stab at the goose and then to the Penalverne estate, this time with digiscoping gear to have a go at photographing the starling.
This time when I arrived at Drift there were some geese on the field on the other side of the reservoir directly opposite the car park and I could immediately see that both the grey lag and the Greenland white-fronted goose were in amongst them. I took some record shot video of the goose that had managed to avoid me for so long and then had a look through the gulls. A little gull had been reported yesterday afternoon and sure enough I soon found it bobbing up and down in amongst the black-headed gulls.

At last, the elusive goose is on display 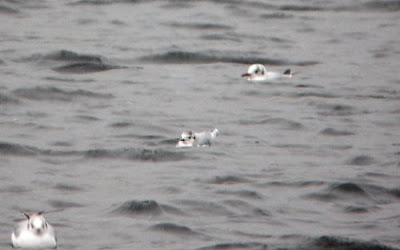 A videograb of the 2nd winter little gull
Next it was back to the Penalverne estate where this time I found myself on my own. An inquisitive local was asking about the bird and I explained what it was to him. The bird itself turned up within 10 minutes again and this time I was ready for it with my digiscoping gear and managed to rattle off a few shots before it flew off again. 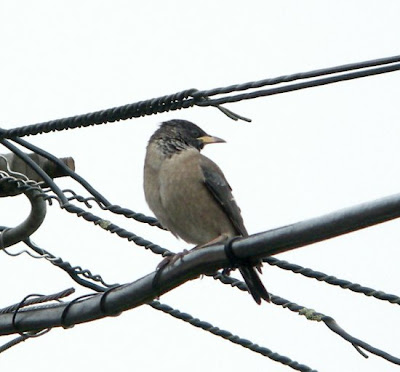 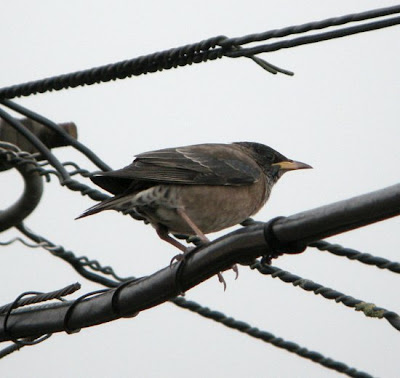 The rose-coloured starling
Having got some photos of all my target birds it was back off to the cottage for a hard day's decorating. After spending most of the day with flecks of paint in my hair and the smell of paint fumes in my nostrils, come late afternoon I was thinking of calling it a day and getting out for some fresh air. Fortunately there was a CBWPS field outing to Men-an-Tol to help with the hen harrier roost count happening so I decided to nip over there just to get outdoors if nothing else. There I met up with Dave Parker (who was running the outing) and John Swann (who was helping out and who had been helping me with my county list) as well as a dozen or so other hardy birders who had decided to brave the drizzle and mist. We walked for about twenty minutes to the watch point and then stood around peering into the mist. Fortunately one harrier was soon spotted, probably hunting rather than coming into roost but the weather conditions gradually worsened and the mist closed in until nothing could be seen at all and we called it a day, with just the one bird seen. Still, I'd not been walking on the moors at all so far and it was great to get acquainted with such wonderfully wild countryside. 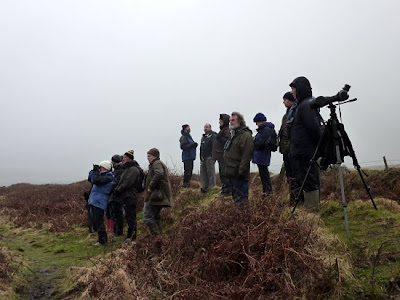 The hardy few staring out into the gloom for harriers
Posted by Adam Hartley (Gnome) at 04:00