I was up very early cleaning the cottage for the forthcoming guests and packing things in the car. I had been vaguely contemplating going back home "via" Pembrokeshire for the very smart looking lesser grey shrike there but I finally decided that this was just too circuitous a route even for me so with a good south-westerly wind forecast I decided that another PG sea-watching session was what was required and so at around 7:30 am I was back at Hella Point though when I arrived the wind was much more subdued than forecast and there was only one other person (a non-local) there. Gradually throughout the morning though more and more people arrived (Dave Parker was the only one I knew) so that by the time I left at around 10:30 there were about a dozen people there.
Things looked quite promising initially with a couple of stormies and a sooty almost as soon as I sat down but it quickly tailed off so it was very quiet with just the odd stormy for our collective efforts. After a while it started to get a little better and my final tally was 3 stormies, 6 sooties, 1 arctic skua, 1 pom and 1 bonxie. After I left it all seemed to kick off though and as well as a good number of Cory's going through at some time in the early afternoon a Wilson's petrel went through and even lingered for five minutes around the Runnel Stone. Most gripping!
I went home to pack and then headed for home, stopping off for a final look in at Hayle as I was going past. There it was similar to my previous visit with three Mediterranean gulls (1 s/p adult and 2 1st/s) and the usual waders. 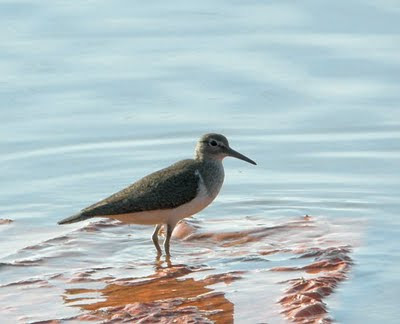 Hayle common sandpiper at Ryan's Field
It had been another most enjoyable visit down to my favourite part of the country. Given that it was July I'd not been expecting much and so to get a total of seven county ticks was quite a good effort. In addition it had been great to catch up with some local butterfly specialities. My sea-watching sessions had only whetted my appetite further and I was already looking forward to my next visit down there.
Posted by Adam Hartley (Gnome) at 14:20