I woke this morning to more fog and little wind so once again there wasn't going to be any sea-watching on offer. Once again I did an extended morning painting session to give the fog a chance to lift and then for a change I thought that I would go to Nanquidno where a wryneck had been reported for the last few days. I also wanted to explore the valley a bit further as I'd only ever birded around the ford area previously so this would be an opportunity to get to know the area a bit better.
At around 10am I arrived, parked up and headed down the valley. There were plenty of birds around, mostly mixed flocks of tits and chiffchaffs which I grilled for something more interesting but to no avail. Down at the wryneck spot I met a couple of other birders, from Southampton but who had a place in Penzance and we had a good chat. They'd been there for a couple of hours but there had been no sign of the wryneck though they had seen a pair of spotted flycatchers. Given their lack of success I decided not to bother staking out the area for very long and instead made my way over to Little Hendra which is a place that I'd heard of in the past for things like ortolan and lapland bunting in the various fields but had not visited before. This was also an opportunity for me to test out my new OS map app on my phone: it gives you an OS map and a "you are here" spot which makes it very easy to navigate your way on footpaths and tracks as it updates in real time. As long as you have a phone signal it works really well and I soon managed to navigate my way to Little Hendra where indeed there were plenty of good looking fields around though they were all empty apart from a few rooks. A couple of juvenile green woodpecker (not such a common bird on the peninsula) flew over as did a sparrowhawk and a couple of calling chough but apart from that it was all quiet. I made my way back to the wryneck spot (still no sign) and then back to the car and home for lunch.
That afternoon it was back to Hayle once more, this time to look for the little stint. I mentioned this in passing to Badger back in Oxon and he was amazed to learn that I had got pec., buff-breast and Baird's sands all before I'd got little stint in Cornwall - but that's Cornwall for you! It was quite a high tide today so there were no birds at all at the Hayle bridge and I decided to explore the Carnsew basin where Dave Parker had seen the stint yesterday. As I made my way along the sides of the Basin a sparrowhawk flew up and over the course of the afternoon I saw it a number of times as it made unsuccessful attempts on the roosting waders. A flock of 7 sandwich terns were flying around noisily and diving into the river. Up near the top of the Basin I met a birder who said that he'd just managed to find the Baird's sandpiper in amongst a group of waders that were on the seaward side of the Basin by the bend. When I asked he said that he had also seen a little stint in amongst them so I hurried on. Unfortunately it had started to rain quite hard and it was rather windy so viewing conditions were not ideal. As I grilled the waders a local called Brad turned up and we looked together though neither of us could find anything apart from the usual suspects though few birds had already started flying off from this location as the tide had now turned so it's possible that they'd moved off. 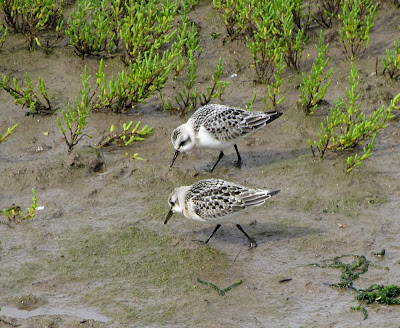 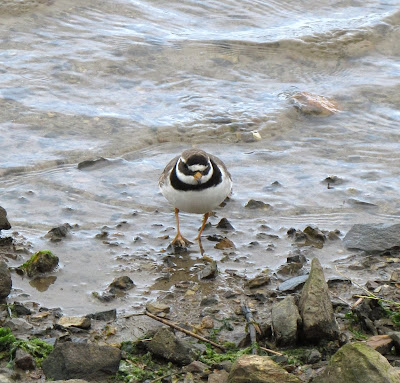 The palmations on it's foot got me excited for a moment until
I read up that ringed-plovers have small palmations between the
middle and outer toe too! 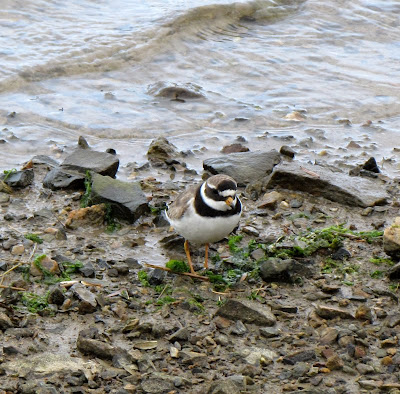 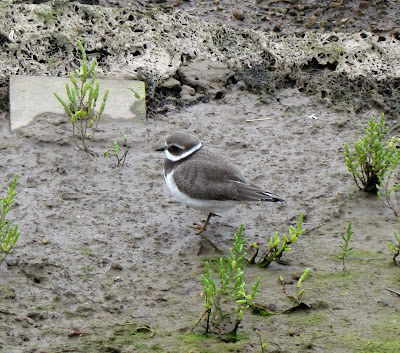 Some of the usual suspects on the estuary, taken
a couple of days earlier in better light (Click to enlarge)
As I was keen to find the stint I decided to work my way back towards the bridge and Ryan's Field to see if I could track it down. At the car wash I came across a group of birders peering intently into the gloom at the rapidly expanding area of exposed mud which the waders were repopulating as the tide ebbed. They were all looking for the Baird's though I asked them all if they'd come across the little stint. After a while one of them picked the stint out from the other waders and indeed there it was, albeit rather distant, another Cornish tick. I helped them to look for the Baird's for a while but to no avail though there was a nice mixed flock of terns on the estuary, comprising 15 arctic and 20 sandwich terns. Eventually it got too dark and we all went our separate ways. With another Cornish tick notched up I went back home for my evening painting session.
Posted by Adam Hartley (Gnome) at 21:00