Back down to Cornwall for another week of frenzied painting (this time it's all the windows) and birding. As usual I'd been keeping a keen eye on what was about in Cornwall: there were still some hangers on from the initial batch of Nearctic waders with a couple of Lesser Yellowlegs (Drift & St. Clements, near Truro) and a Long-billed Dowitcher at Stithians Reservoir. Unfortunately the long-staying Drift Semi-P had chosen to move on and with just a few days until my arrival the Drift 'legs also departed. As usual I looked about for something to stop off at on the way down and my chosen route for the journey was as follows: Lodmoor in Weymouth for the Red-backed Shrike (as far as I'm concerned Weymouth counts as "on the way"), St. Clements for the Lesser Yellowlegs and finally Stithians Reservoir for the Dowitcher.
I set off earlier a little after 8 a.m. and after negotiating the Oxford morning rush-hour traffic I was finally on the A34 at around 8:30 when after an uneventful journey I arrived at Lodmoor mid morning. Red-backed Shrikes are very hard to come by in land-locked Oxfordshire so I was happy to make a bit of an effort to go and see one. This turned out to be a very easy twitch and within five minutes of stepping out of the car I was watching the bird from a range of about 50 yards in what were rather hazy conditions because of the bright sunshine. I spent a little while taking some digiscoped record shots though the haze meant that the results weren't that great. The wader scrapes themselves seemed rather empty with just a single greenshank, one bar-tailed godwit, one grey plover and 5 dunlin around. Having seen my bird and with a lot of driving on relatively slow roads ahead to get back on to the main route, I didn't hang about but pressed on for Cornwall. En route I got a text saying that there was no sign of the Stithians Dowitcher though the St. Clements Yellowlegs was still around. 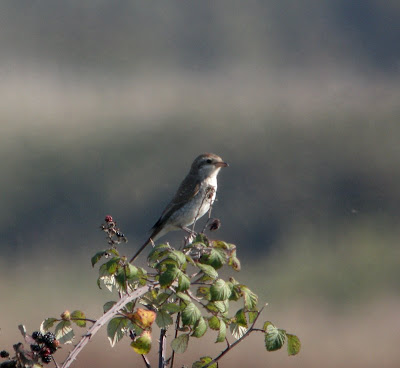 The Lodmoor shrike, digiscoped in rather hazy conditions
In good time I arrived at my next destination of St. Clements. This turned out to be a small village on the edge of the River Tresillian which was rather wide and with the tide right out consisted of a vast area of mud. There was a pool, called Tresemple where the bird sometimes hung out but I managed to find the bird on the main river almost as soon as I started looking. It was rather distant but having spent every day for a month watching "my" Lesser Yellowlegs on my home patch of Port Meadow this time last year I found that the dainty features and rapid feeding action leapt out at me even from across the river . In the scope I could make out it's lovely yellow legs though it was too far away for even me to attempt a photograph. Further up by Tresemple pool there were a total of 6 Greenshank and a Spotted Redshank as well as good numbers of Curlew and some loafing gulls.

Back in the car I headed off for Stithians Reservoir and was just getting close to it when I got a call from Dave Parker saying that the Red-backed Shrike at Land's End was still about and showing well just below Swingates House. I thanked him for the message and resolved to head there straight after my reservoir visit. At the reservoir I couldn't believe at just how low the water level was with so much of what had been submerged now exposed. There I met a couple of local birders whom I'd met before who'd been there for the last two hours scouring all areas in search of the Dowitcher. I told them about the "No Sign" pager message which at least put their minds at rest regarding having missed it. By way of compensation there was a Wood Sandpiper around and a couple of Wheatears. They'd also seen a couple of Pecs and a flock of Dunlin though these all seemed to have moved off somewhere else by the time I'd arrived. Given how thoroughly they'd already searched for the bird I didn't hang around at all and within fifteen minutes I was heading off for Land's End.
I arrived at Land's End to find another birder just escorting his wife to see the shrike and he was able to show me exactly where it was hanging out so that in a few minutes I was watching it. In the evening sunshine it was bathed in a wonderful golden glow and without the haze from this morning I was able to enjoy fantastic views of this beautiful bird. 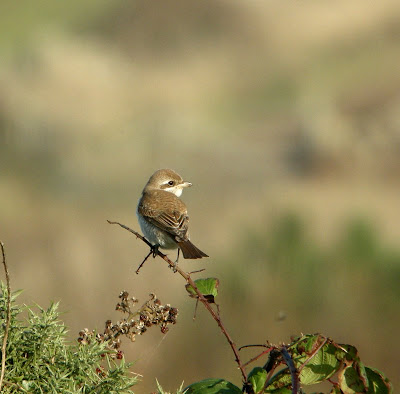 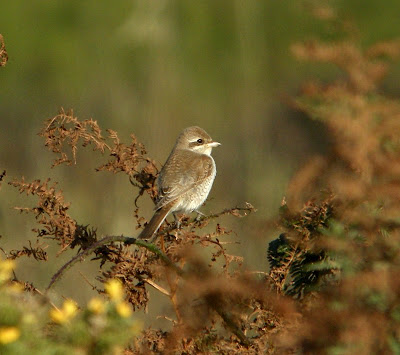 The shrike was slightly too far away for a super-zoom
shot so I had to be content with digiscoping though the light
was absolutely perfect.
Tired but very content with my journey down I headed off to the cottage to get unpacked and to russle up something to eat. It had been a most enjoyable start to my time back down in Cornwall.
Posted by Adam Hartley (Gnome) at 20:11