As I mentioned in previous posts we were coming back down en famille for the half term break. With all the rest of the family about (bar daughter number 1 who wanted to stay at home because she had some gigs to go to and some work to do) I fear that there won't be many birding opportunities but with things rather quiet in the county at present this probably won't be too gripping. En route Beth (daughter number 2) had requested that we stopped off at Golitha Falls which she really likes. As I still need marsh tit for the county list I was only too happy to oblige and my VLW and our son, Luke, hadn't been there before and were interested to see it too. Unfortunately the weather was rather overcast and breezy though mercifully at least the very cold temperatures had finished. We had a little wander about though the breeze meant that birds were hard to see. I managed a couple of screeching jays, a distant calling greater spotted woodpecker and a couple of nuthatches but not much else. 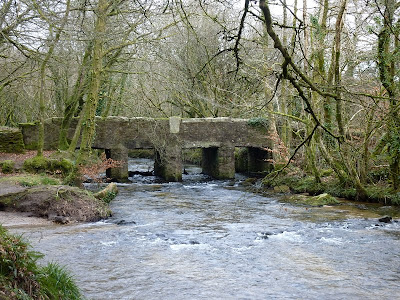 My VLW is an artist and so I spend a fair bit of time
when out in the field taking photos of likely subjects for
her pictures. Here's the bridge by Golitha Falls
I persuaded the family that they should have their hot chocolate break from our thermos a few minutes up the A30 at Temple whilst I had a quick look around for the reported great grey shrike there. The terrain didn't didn't strike me as ideally "shrikey" and there was no sign of it in the ten minutes that I had of looking. After that it was back along the A30 to Penzance where we stopped off for provisions and then on the cottage. There we discovered that the central heating had stopped working for some reason. We called up our builder who sent out his plumber to take a look despite the late hour. He diagnosed that the oil pump had gone but that he should be able to get a replacement tomorrow. Still it meant a very chilly night in the cottage which, due to its exposed location, can get very cold inside without any heating. We all slept fully clothed and were glad of the extra blankets on top of our duvets. Fingers were strongly crossed that they would be able to sort things out the next day. 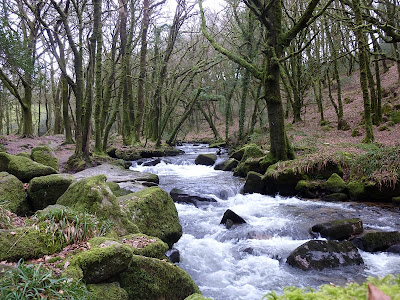 The river Fowey at Golitha - another potential picture subject
Posted by Adam Hartley (Gnome) at 11:18