It had been about a month since my last visit down to Cornwall and I was starting to get withdrawal symptoms which were being exacerbated by the wealth of good birds that had been turning up including several night herons, hoopoes and a blue-winged teal to name but a few. With the holiday season about to kick off properly and our cottage booked up for the whole of April I thought that I would nip down just to check up on the small building projects that had needed finishing off and to sort out a gardener to look after the outside.
It was going to be another flying visit, down on Tuesday, do stuff on Wednesday and return on Thursday so I wouldn't have a great deal of time whilst down there but I was hoping to sneak in at least a bit of birding en passant. As usual I looked around to see what was of interest en route but the only bird that I could find was a very elusive little bunting at South Milton. I spoke to a local about it who informed me that the bird was occasionally coming to a pile of seed put out under a tree but one could go many hours without seeing it so it was a bit hit and miss. Nevertheless, with nothing else picquing my interest I decided to have a go for the bunting on the way down.
I set off from Oxford at around 9am and with the roads being nice and clear I arrived in South Milton at around 12:30. There I found a couple of other birders who were also trying for the bunting and one of them informed me that it had in fact been seen by some others earlier on. I decided to give myself a time limit of two hours and dutifully kept watch over the seed pile as birds came and went. There was quite a variety with reed buntings, chaffinches, goldfinches, great and blue tits, robins and dunnocks all visiting the seeds. While we waited a Cetti's would call occasionally from deep within the nearby reeds. The others gave up after a while but I dutifully stuck it out for my allotted two hours but without success. Disappointed with my failure, I returned to the car and headed off for Cornwall.
Once on the Penwith peninsula I decided that I would take advantage of the extra daylight to go and check out Kenidjack to see if I could find the elusive Night Heron that had been lurking along the stream for a couple of weeks now. It was rather breezy though very sunny as I made my way down the valley. I soon discovered that the big problem with trying to see this bird was the fact that it was often impossible to see the stream as it twitsted and turned down the valley and there were large sections that were invisible from the main path. After some exploration I managed to discover various other paths on the other side of the valley and by working my way along them I was able to cover more sections of the stream. However after a good hour and a half of searching I failed to come up with the bird at all. A grey heron was flapping around for a while but nothing more exciting than that. Disappointed with another failure I decided to head home and to boot up the cottage. 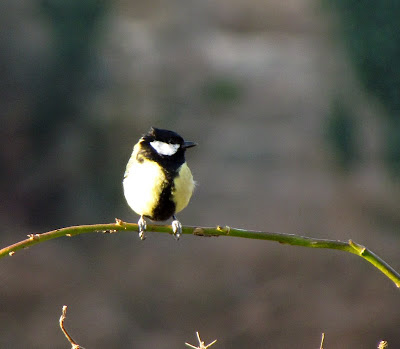 A great tit, taken at Kenidjack 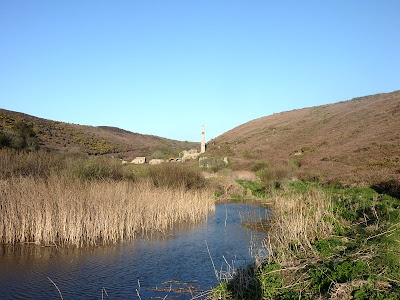 At least I got to explore the many tracks surrounding the
stream. This is from the Mill Pond looking back towards the chimney ruin
To add to what was turning out to be a rather bad day, I arrived at the cottage to find that there wasn't any electricity. Readers may recall that this wasn't the first time that I'd turned up to find that something wasn't working: last time it had been the central heating. After some phone calls I'd ascertained that the neighbours seemed to have power so it must be a problem at my end and as the meter was completely blank power wasn't getting inside at all. I called the power distrubution company who said that they'd send someone down some time in the next four hours(!). Fortunately he came in about an hour and a half where he quickly spotted that the problem was a loose wire on the telegraph pole. However he couldn't deal with it himself and would have to call the "overhead team" who themselves would come some time in the next four hours apparently. I passed the time reading by torchlight and at around 11pm the overhead team turned up and fortunately were able to sort things out within about 20 minutes. After that I was finally able to cook a hot meal and relax a bit before going to bed. All in all it had been a rather frustrating and unsuccessful day. The only positive that I could take from it all was to be thankful that it had been me that had discovered the power outage rather than our first guests on Saturday.
Posted by Adam Hartley (Gnome) at 17:01