So I'm back home already after what was a very brief visit to my favourite part of the country. The weather back here in Oxford has finally broken and it's now cloudy and distinctly chilly and it seems a world away from the wonderful sunshine of far west Cornwall. Before I'd set off I'd not exactly been looking forward to the trip: doing it all in three days makes for a lot of tiring driving and I was worried that if the birding wasn't that good then I would feel distinctly disappointed with having made all that effort for no reward. The lack of success on the first day only seemed to confirm these fears but fortunately from then on it all turned around and I managed to add five species to my Cornish list: a self-found new Night Heron at Kenidjack started it all off, then a Little Ringed Plover at Marazion and a wonderful Hoopoe at the Brew Pool. The next day's Cornish ticks were Dartford Warbler and the Walmsley Blue-winged Teal. I'm pleased to announce that with these fives ticks I have now managed to overtake my Oxon county list total with my Cornish one. Those of you who know my paltry Oxon total won't be overly impressed with this but I'm pleased to have racked up a modest Cornish total relatively quickly. Considering the slow rate at which my Oxon total is added to I don't imagine that it will ever catch up with the Cornish total again 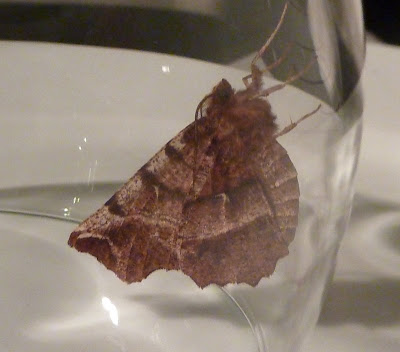 I leave you with a moth du jour photo. With there being hardly any wind I did leave the "moth light" on outside one evening a quickly attracted a couple of these chaps. My method of mothing is rather primitive: I leave the outside light on and then catch any that I find in a wine glass before taking them inside for photographing. I've finally got around to getting a moth ID book of my own: "Concise Guide to the Moths of Great Britain and Ireland" by Townsend & Waring, illustrated by Richard Lewington. Therefore instead of simply sending my moth photos to John Swann for identification I thought that I'd have a go myself. This moth was very striking in that it held its wings closed like a butterfly so I'm pretty confident in identifying it as an Early Thorn though if anyone knows any better then please do write a comment below.
Posted by Adam Hartley (Gnome) at 10:26