I'm back down in Cornwall to see the New Year in with my family. It was a bit of a last minute decision but we did it last year so there are the seeds of a new tradition emerging. The weather forecast wasn't that great but we thought that we'd give it a go anyway. Normally when I'm travelling on my own I like to leave nice and early but with the inertia of the whole family to deal with it took ages to get ready to go. A detour to buy some food for the journey and the need to buy some new car windscreen wipers meant that we didn't actually leave Oxford until 12:30 and the usual heavier Saturday traffic on the way down meant that we didn't arrive until well after dark some five hours later. I'd tentatively suggested that perhaps we might like to stop off en route to look at a Green-winged Teal near Torpoint but for some reason the rest of the family weren't interested. It was blowing a howling gale at the cottage when we finally arrived but with some warm food inside us we soon settled in.


Sunday had the best forecast for the next few days so I thought that I'd take the opportunity to check out the local birds of interest. Not that there was much of particular note about but there was an over-wintering Sub-alpine Warbler at St. Just, a Black-necked Grebe in Newlyn harbour and a Ring-billed Gull had been reported along the sea-front at Penzance between Jubilee Pool and Wherrytown. I didn't feel motivated to get up particularly early for these birds and instead had a nice lie in. At around 10 o'clock with my two daughters wanting to do some revision for their forthcoming exams and my VLW and her brother happily chatting away I thought that I'd nip out to do some shopping in St Just where I could at the same time have a look for the Sub-alp. As I drove away from the cottage I had a lovely view of a large Peregrine that flew low past the car.

I was just setting off from the main car park at St Just when I bumped into a couple of local birders whom I'd met before but whose names I didn't know. They knew where to go for the Warbler and kindly showed me the way. As we walked down they informed me that it was a very difficult bird to see: one of them had seen it once for 5 seconds, the other chap hadn't seen it at all in seven visits totalling about 10 hours of searching. I began to reasses my chances of seeing this bird - I already had it for the county anyway so it wasn't that urgent but this was sounding like a needle in a haystack job. It turned out that there were two main areas to search: the back gardens of Princess Street and the front gardens of the next road. My two guides kindly walked around the circuit for me pointing out all the hot spots. One of these was the back garden of a local birder where it was most often see because it was the most closely watched but on our circuit there was no sign of it at all. My two companions seemed happy enough with this one lap and walked off whilst I decided to give it half an hour on my own. I walked slowly down the back of Princess Street peering into all the likely spots though it seemed a pretty hopeless task. I just arrived at the local birder's garden when I saw something moving in the tree that hung out of the back of the garden. A second or two later I got a proper view and blow me if it wasn't the Sub-alpine Warbler itself. It was a cute little thing, looking pretty much like a whitethroat though with a pinkish flush from below its white throat extending down all the underparts, with rather plain grey-brown upper parts. There was a slightly scruffy air to it, presumably because of it being a first winter. It sat there happily in the tree whilst I scrabbled for my camera but before I could even get it out it of the case it slipped off into the garden. Amazing! Since I'd left my two guides it had been no more than a few minutes, a great piece of luck given how long others had tried to see it. I didn't bother hanging around after that but walked back into St Just to do the shopping before heading back. 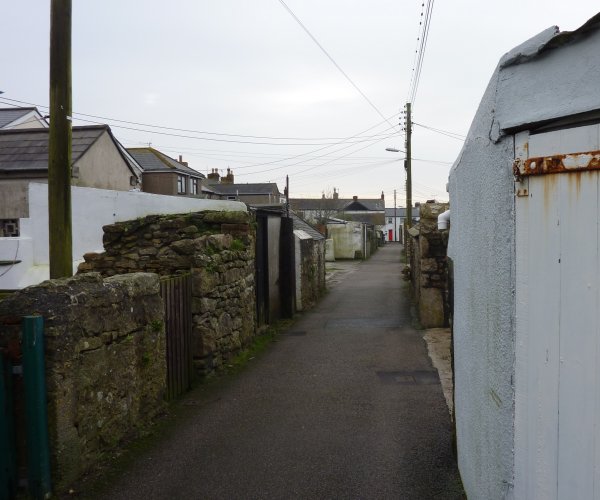 
On the way home I nipped into Kenidjack to check up on the reported Siberian Chiffchaff that had been hanging around the sewage works. There I met up with my two companions from earlier to whom I relayed my good news regarding the Sub-alp. The poor chap who'd still not seen it was remarkably gracious despite the monster grip-off. The Sibe Chiffy was easy to find as it was feeding actively around the settling pool with three normal Chiffies. I spent some time trying to photograph them though they were very mobile and I had to shoot them through the wire fencing. After a while I decided that I had to get back to the cottage and headed home. 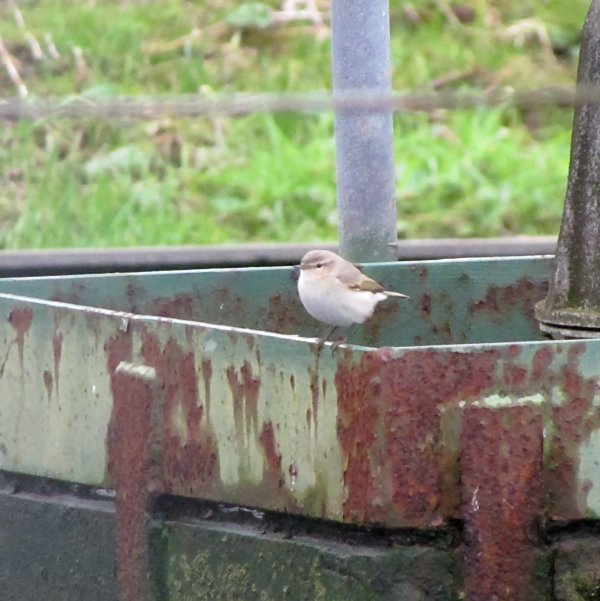 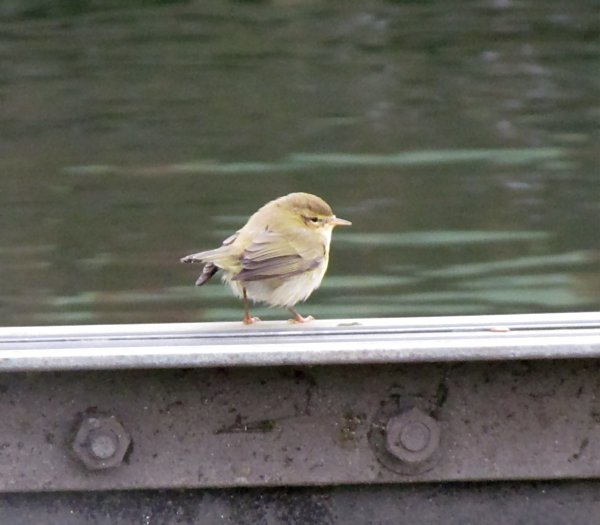 Chiffies - the Sibe above and a normal below


After a hearty lunch we all decided to head off for an outing. Given the strong winds were blowing from the south-west we decided to head over to the other side of the peninsula where it should be more sheltered. Some of our party wanted to go shopping in Penzance and the rest of us decided to have a wander around Newlyn harbour. We parked at Tolcarne beach where I met up with Brian Field who'd come looking for the reported Ring-billed Gull. We had a good look around though there were only a couple of adult Common Gulls around and a sub-adult Herring Gull with a rather ringed bill. Two adult Mediterranean Gulls were loafing around with the Black-headed Gulls but that was about it. 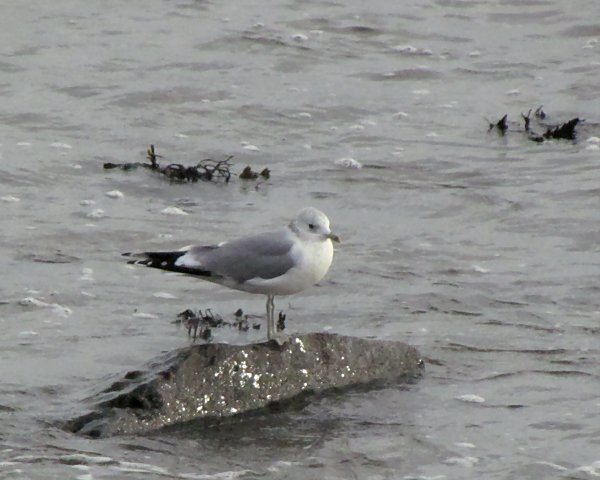 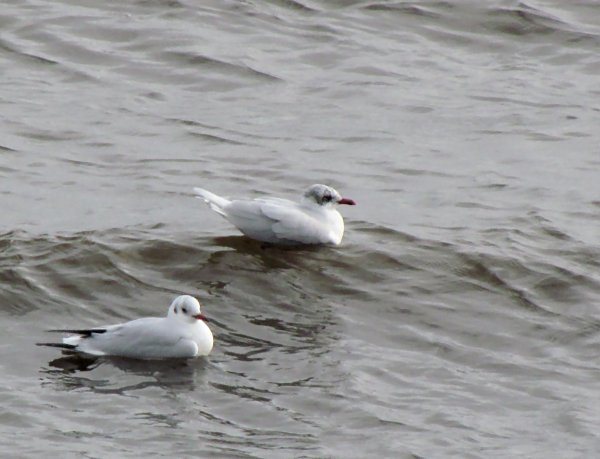 After a while we headed over to the harbour where the rest of the party borrowed my cameras and set about photographing the various boats whilst I had a look at the birds with Brian and a couple of other birders who were down from Newquay for the day. We soon came across two juvenile Great Northern Divers which were showing very nicely close in near some of the moored ships. Further in the harbour we found another Great Northern Diver and finally the Black-necked Grebe itself. Brian got a text from Mush saying that yesterday's Ring-billed Gull had been re-identified from photographs as just a Common Gull so at least I didn't need to worry about trying to find it, 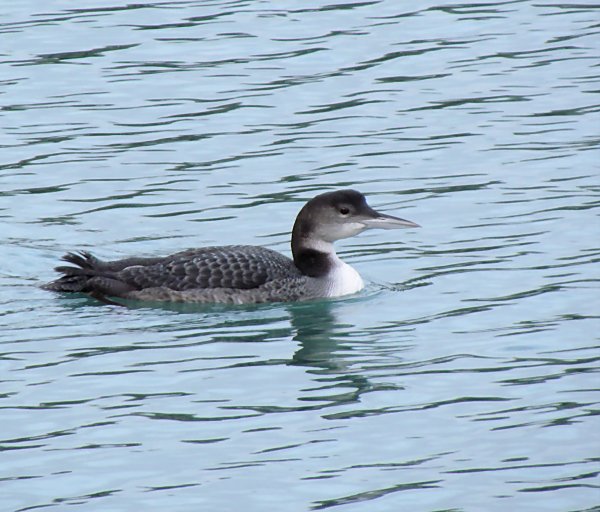 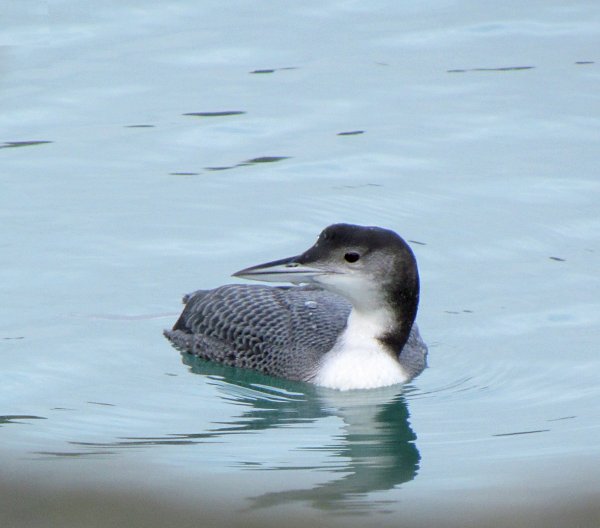 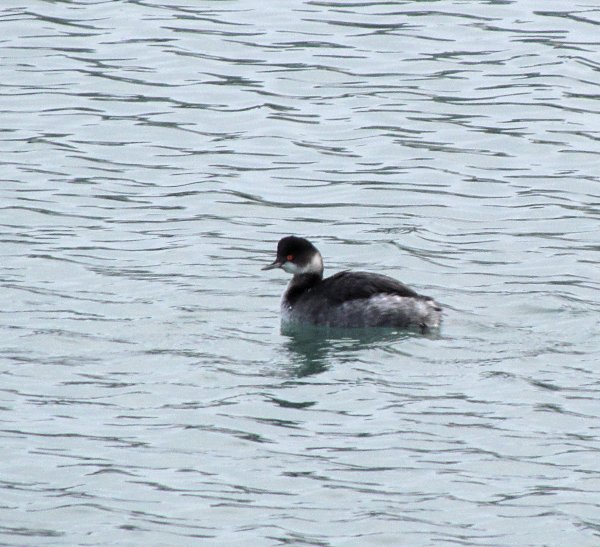 
By this time the others had had enough so we headed back to the car and rendezvous'd with the shopping party  in a café for some brownies and hot chocolate. After this we nipped over to Marazion in the last gasps of daylight to walk along the beach to the playground. There we messed around on the zip wire in the dark for a while before heading back to the cottage. It had been a very successful day and I'd managed to catch up with some nice local birds.
Posted by Adam Hartley (Gnome) at 21:32