As I was intending only to have one full day down in Cornwall before heading back home I knew that today was going to be a busy one! I had to do all my chores for the cottage, meet up with the builder to discuss some work and also try to cram in as much birding as possible into the one day. Accordingly, before it was light I was heading out the door and over towards Hayle where my first birds of the day were to be looked for. Just as I was leaving Pendeen heading for Penzance I spotted a lovely Barn Owl hunting by the chimney ruins - a very nice start to the day. The reason for my early start was that I wanted to look for Jack Snipe over at Copperhouse Creek and had been told that I had to get there before the dog walkers arrived. Fortunately the tide was in my favour and it was just about still covering the reedy east corner when I pulled up so there was no possibilty of any prior doggy intervention. I realised that I probably should have brought wellies rather than just my walking boots but it turned out that the mud was only an inch or two deep before one hit gravel so I was going to be all right, albeit rather muddy. I spent the next hour or so tramping around looking for that tell-tale underfoot flush but all the birds were Common Snipe that sped off before I got anywhere near them. Oh well, another time. The weather was actually really nice first thing with some sunshine and none of that biting north easterly wind that was so chilling. The estuary was full of the usual birds but a Greenshank caught my eye as being more noteworthy for this time of year. I had a quick look for the Water Pipit on the salt marsh on the other side of the road but couldn't see any sign of it. A calling Blackbird in Phillack was giving a reasonable impersonation of a Rosefinch which had me going enough to go and check just to be on the safe side. One's got to check these things out even if they usually end up being nothing. Oh well, on to the next location. 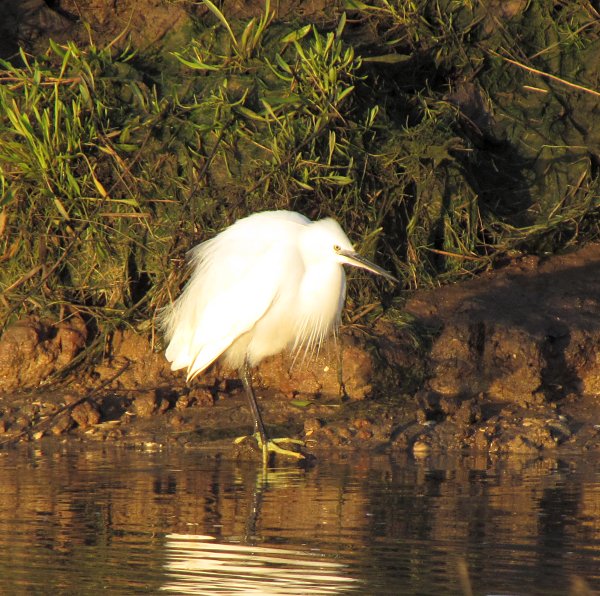 A Little Egret in the morning sunlight


Next stop was just around the corner at the Hayle estuary to look for some Yellow-legged Gulls. Now Cornish readers may not really be aware of this but back home in Oxford I'm known for being a bit of a gull addict and regularly spent my evenings checking out the gull roost on my local patch of Port Meadow, and delighting in picking out Caspian Gulls and Yellow-legged Gulls from the throng. In fact we had a real purple patch on the Meadow at the start of the month with two Glaucous Gulls, an Iceland Gull, countless Yellow-legged Gulls and four different Caspian Gulls all in the space of two weeks. Back in Cornwall there are not usually the same gulling opportunities. Sure there were Med Gulls to pick out from the Black-headed's but one was not faced with a flock of thousands to sift through like back home. Even here on the Hayle estuary there were probably only a couple of hundred gulls or so to look through. Yellow-legged Gull is much rarer down here than in Oxon where I can reasonably expect at least one in most evenings - in fact here it would be a Cornish tick for me. There were supposed to be two or three of them about at present: an adult, a third winter and a first winter. I parked up at the Jet Wash and set about scanning through the birds. By this time it was still sunny (a bad thing for gulls as it's hard to judge the mantle colours) and to make matters worse the tripod-shaking bitter wind was back. However with only relatively few birds about to search through it didn't take me too long to find at least the adult and the third winter. One fact which makes gulling easier down here in Cornwall is the absence of argentatus Herring Gulls. Back in Oxon we get a mix of both types and everything in between but here they are all pure "British" Herring Gulls and consequently much more uniform in appearance which makes something different much easier to pick out. The third winter was rather advanced with hardly any brown streaks left in it though the absence of almost any white apical marks in its long dark primaries was rather a give-away. The adult bird really stood out from the argenteus Herring Gulls as well with it's strikingly dark mantle and very long primaries though its legs only had a pale yellow hint to them at this time of year. 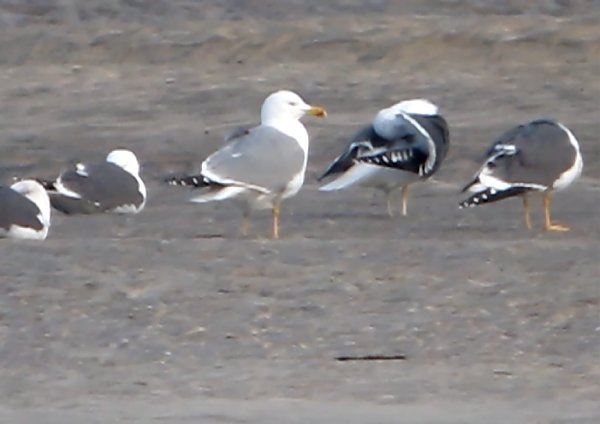 
I next moved on to the river bridge to see what was about with four Grey Plover and a few Bar-tailed Godwits being the only waders of note. I could only spot three Mediterranean Gulls in amongst the smaller gulls (two adults and a first winter). As the light was still very good I spent a little time taking a few snaps with the Super-zoom camera. After that it was time to head back to the cottage to get on with my chores for the morning and to meet up with the builder. 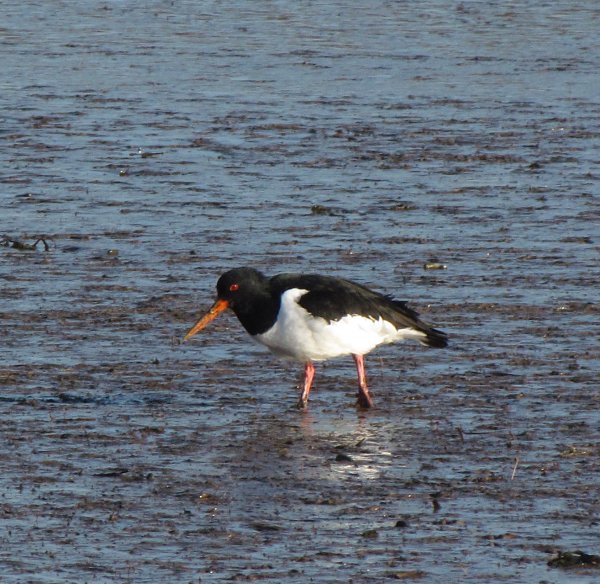 
I managed to get all my work at the cottage done fairly quickly and the meeting with the builder was surprisingly brief so I soon found myself with some free time on my hands. I therefore decided to head east to Stithians Reservoir to see if I could catch up with the Brambling that had been regularly visiting the feeders there for some time now. I arrived to find John St Ledger in the hide watching the feeders and I soon managed to add Brambling to my Cornish list. There were at least two birds coming regularly to the feeders or feeding on the ground below along with at least 30 Chaffinch, some House Sparrows, a few Reed Buntings and a very secretive Water Rail skulking around under the feeders that would scurry off at the slightest noise, so I wasn't able to get a photo of it at all. I munched on my packed lunch and enjoyed the coming and goings of all the birds for about an hour. 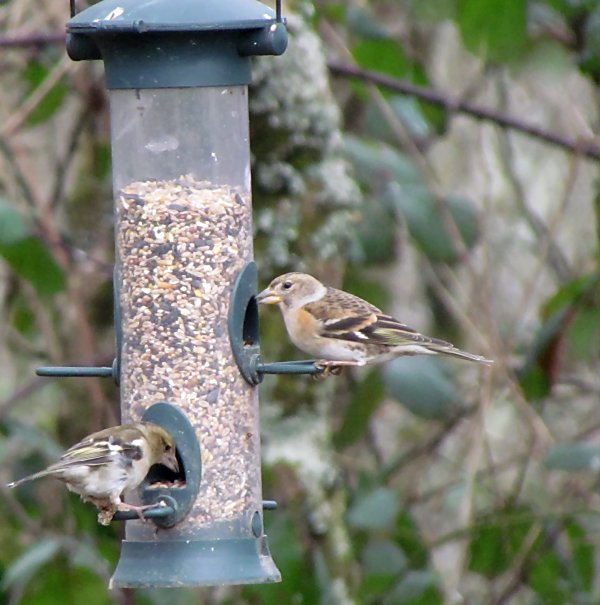 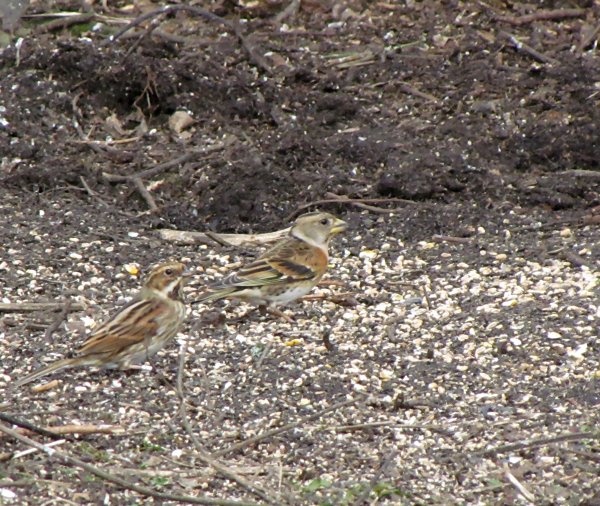 Brambling is one of my favourite finches


After that I nipped over the road to check out the main reservoir where there was supposed to be a juvenile Long-tailed Duck about. In the hide I met Alex Mckechnie though he'd not see any sign of it. Back on the causeway road I found a couple of other birders who apparently had seen it briefly about twenty minutes ago with some Tufted Ducks though I couldn't find it at all. The biting wind was still making things difficult so I didn't stay too long before heading off for somewhere more sheltered.


Whilst I was in the neighbourhood I thought that I would drop in on the juvenile Whooper Swan which had been spending some time on Croft Pascoe after having originally been found on the Helston boating lake. Clearly lost it had decided to stick around at Croft Pascoe for a while where at least there was plenty for it to eat. It looked rather forlorn on its own - let's hope that it manages to find its way north to meet up with others of its own kind in the spring. 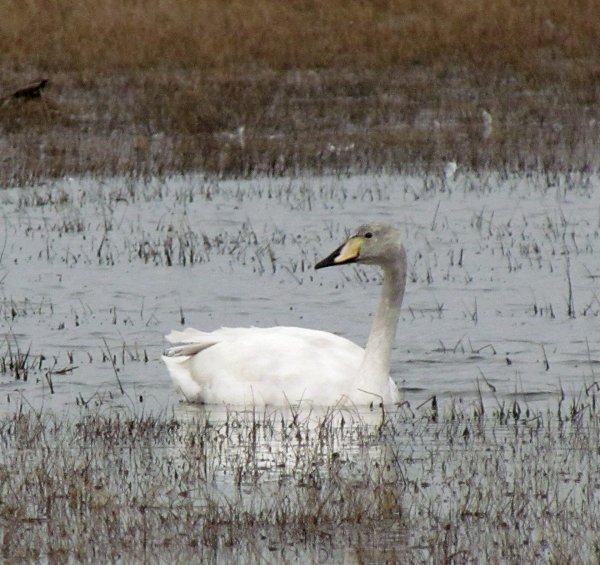 
After that I wondered what to do next. I contemplated looking for the mixed Bunting flock (Lapland and Snow) on Treen Common but the prospect of spending more time out in the wind wasn't that appealing. Instead I opted for the shelter of Marazion where the sea was relatively and calm and I would be out of the wind. A scan of the bay to the west of the Mount found only a couple of Great Northern Divers so I moved to Marazion itself and found a nice little viewing spot in the form of a tiny public garden right next to the Godolphin Hotel that allowed me to view the bay to the east of the Mount. To start with there was a large flock of waders directly below me all seeking shelter from the high tide and gorging themselves on the invertebrates in the exposed sea weed that had been washed up against the wall. There must have been at least 50 Sanderling, 30 Turnstone and about 20 Dunlin as well as a Rock Pipit and a single Knot. It was a delight to watch the birds scampering about at such close quarters. Out in the bay a couple of huge rafts of roosting gulls were assembling: the big gulls were way over in the distance but close by was the small gull roost and in amongst the hoard of at least a thousand Black-headed Gulls I found twelve Med. Gulls (ten adults, a second winter and a first winter). I had been hoping for some Black or Red-throated Divers but there were none to be seen.


After a while it started to get dark so I headed back to the cottage for something to eat and to get on with my evening chores. It had been an enjoyable if rather low-key day's birding.
Posted by Adam Hartley (Gnome) at 08:54