It seems like far too long since I was last down in Cornwall. Even though from a distance things seem rather quiet down here I still miss the great birding and anyway it can't be any quieter than it is back in Oxon of late.With a few bookings coming up in the cottage in March I needed to come back down to meet up with the builder to discuss a couple of small projects, basically some minor weatherproofing jobs that needed to be done. It would also be an opportunity for me to do some cosmetic work on some of the damp patches that we still have at present. In the days leading up to my arrival I'd been keeping a weather eye on what birds were down in Cornwall as well as looking out for anything good that I might like to drop in on en route (which is a very flexible concept in my book). The Pied-billed Grebe at Ham Wall RSPB in Somerset had conveniently stayed around for a while now and was only a short detour from the motorway so I marked that down for starters. In addition there were quite a few birds around that I still needed for my fledgling Cornish list which I was keen to try for. To start with there was a drake Green-winged Teal at St John's ford near Torpoint which looked tempting and I thought that I'd stop off at Wacker Quay to look for Avocets whilst I was going that way. If I had time I was wondering about seeking out some Cirl Buntings and there was also the possibility of Short-eared Owls at Rosenannon Downs over towards St Columb Major. So plenty to play for just in getting down to Pendeen.


I set off at around 8:15 on Sunday morning and with the roads nice and clear I arrived at Ham Wall at around 10:45 a.m. I was just getting tooled up when I met a posse of Oxford birders just returning from paying homage to the Grebe themselves. We chatted for a while and then they headed off to Exeter to look for Cirl Buntings whilst I set off to find the Grebe. Ham Wall is basically a large bank of reed beds and pools on either side of a central path with viewing platforms and hides placed along the route.  It was still very chilly with a really biting cold wind so I was wrapped up really warm. I walked as briskly as I could towards the second viewing platform with Glastonbuy Tor in the distance watching over proceedings. As I hurried along I heard my first Cetti's Warbler of the year calling from within the reeds, sadly it's become a rather rare sound in Oxfordshire after the recent harsh winters. There were only half a dozen or so birders at the second screen but the Grebe was on show when I arrived and someone soon got me onto it. Unfortunately it was rather distant and it insisted on loitering right at the back of the open water but despite the near-continual tripod-shakingily bitter wind I was able to make out all the salient features. A Marsh Harrier floated by in the distance and there was the usual mix of Wigeon, Teal, Shoveler and Little Grebes dotted around the place. Presently the Pied-billed Grebe disappeared from view for about ten minutes before it turned up again and I watched it until I started feeling too cold. After that it was a brisk yomp back to the car and back on to the motorway towards Cornwall. 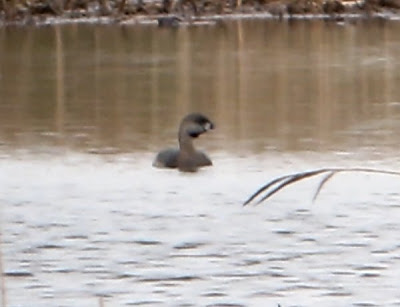 Given how far away the bird was and how much the tripod was shaking
this rubbish record shot is actually a pretty good achievement!


I took the A38 rather than the A30 at the fork after Exeter and headed towards the Plymouth area where a lot of my target birds were located. I had been wondering about nipping in for the Lesser Yellowlegs at Ernesettle (on the Devon side of the Tamar) but in the end decided that I didn't really have time if I wanted to see some of my Cornish targets so I chose to give it a miss. Instead I headed towards Torpoint and St John's ford with the Green-winged Teal in mind. I did stop off for a few minutes at Wacker Quay where I found some birders already set up by the "viewing gap" - they kindly let me take a look at the Spoonbill they were watching so I didn't even need to get my scope out. Unfortunately there were no Avocet there today (still a Cornish tick for me) which I'd been hoping for, though of course a Spoonbill is always nice to see. I soon arrived at St John's ford which is an interesting little spot. The single-track road passes through a narrow ford at the west end of St John's Lake (it's interesting how the tidal creeks and side channels of the Tamar are called "Lakes"). Either side of the narrow road was very soft and deep mud so one had to be careful where one trod. The tide was rather low when I arrived though it had turned and was on the way in again. Some of the birds could be viewed by the parking area but the Green-winged Teal had usually been reported over towards the sewage outlet further around. To view this area one had to walk along the bottom of a field and peer awkwardly through a thin strip of trees. As I started along this path I met up with a couple of lady birders. It turned out that this was their third attempt at the Teal so they were keen to find it. Another birder also arrived but between the four of us we couldn't see it anywhere. There were plenty of Teal, Wigeon, Redshank, Shelduck, Little Egrets and Curlew all enjoying the mud and right over in the distance towards Torpoint there was a flock of several hundred small waders that I presumed were Dunlin. There's always something very atmospheric about such places and the haunting calls of the Curlew only added to the charm of the location: in nice warm weather I could happily spend hours birding here. After a while we started to head back towards the ford to take another look down at that end. I set up my scope to view down the Lake where the incoming water was smoothing out the nooks, crannies and hiding places for a Teal so surely the bird would have to be seen at some point. A Grey Wagtail flew by, calling to announce its presence. I kept on scanning and sure enough I soon spotted the Green-winged Teal in the distance near the Sewage outlet dabbling away quite happily. I called over the others and we all enjoyed our rather distant views for a while before he swam out of sight behind the sewage outlet wall. Whilst we could probably seen him again if we walked back along the field I felt that I'd seen enough and time was marching on. As I made my way back to the car a Nuthatch called loudly from in the wooded hillside on the opposite side of the river. Time to head off for my next target. 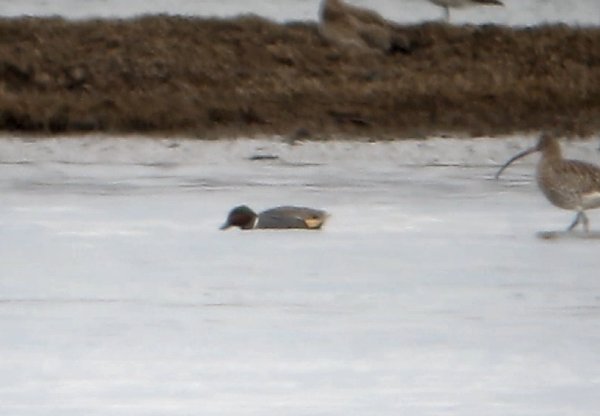 
It was now well after 3pm and I was running out of daylight. I had thought about nipping down to Rame Head for a look round but in the end decided to give that a miss and instead to press on towards the Penwith peninsula and instead to stop off at Rosenannon Downs, located between Wadebridge and St Columb Major. There had been reports of large Lapland Bunting flocks, Harriers and Short-eared Owls there in recent weeks and I was particularly keen to see if I could catch up with the Owls which would be Cornish ticks for me. I'd already coded the location up in my trusty Sat. Nav app and it took me safely there where I arrived in good time at around 4:30pm. 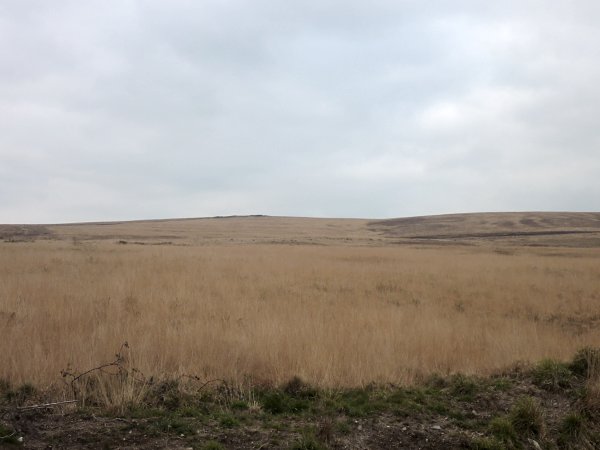 There were several birders already installed there so I went over to join them. They'd seen a Merlin so far but little else of note. Downland habitats are another area with a wonderfully atmospheric feel to them, it's the silence that is most striking to me. However, although the wind seemed to have died down it was very cold and standing around until dark was going to be a bit of an ordeal. There didn't seem to be much to look at either though a couple of the others thought that they saw a Harrier in the distance just above the skyline briefly though I couldn't get on it.  A few large flocks of Starlings went over, their wing beats making an eerie sound in the quiet. A couple of Reed Buntings were calling in the trees behind us and a Yellowhammer turned up and gave us a few renditions of its song. We watched and waited. A Buzzard flew over us. More watching in the cold silence. A lady birder turned up who was a regular for the area. She told us that the top left-hand corner was often where the owls were seen so thereafter I concentrated on this spot. Sure enough just as it was getting dark I spotted a Short-eared Owl sitting on top of a small Hawthorn bush. As we watched a Fox trotted up behind it, presumably stalking it though the Owl spotted it and flapped silently off. As it got darker a Tawny Owl started to call distantly. Finally just at last light a Woodcock flapped over, a nice end to a quiet session. Nevertheless, I'd managed to see my target Short-eared Owl so it had been a successful trip.


By now it was after 6pm and I still had a way to go to get to the cottage. I gave my VLW a quick call so that she wouldn't be wondering where I was and then headed back towards the A30 and on towards Pendeen. It had been a long day, but a successful one with some nice birds seen en route. I arrived at a little after 8pm, booted up the Cottage and had something to eat and a celebratory beer - it had been an enjoyable start to my visit to Cornwall.