From my experience yesterday I decided that checking out Marazion first thing would be best for the elusive Laughing Gull so I was up before dawn and down by the Station House car park as it got light. In stark contrast to yesterday, it was grey, gloomy, breezy and cold though at least it wasn't raining. I wasn't alone in having this idea as Brian Mellow was also there as well as a visiting Devon birder called Dave. As it was around high tide there were plenty of gulls about to look through and between us we soon managed to conjure up the adult Glaucous Gull, the adult Kumlien's Gull and a couple of Mediterranean Gulls. There was also the odd Kittiwake, a Guillemot and a pair of Long-tailed Ducks feeding very close in to the shore. Needless to say there was no sign of the Laughing Gull.

Dave Parker turned up briefly and we had a chat. before he had to head off for work. Periodically the Glaucous Gull and the Kumlien's would take turns to fly along the beach in front of us and it was interesting to note the subtle differences. Even from a distance the Glaucous Gull's wing tips were a brilliant shining white which really stood out whereas the Kumlien's had a more muted paleness to its tips. At close quarters of course one could distinguish the dark grey streaks along the primaries of the Kumlien's. Apart from that there were a few Sanderling, a small flock of Oystercathers and various bits and bobs. I stuck it out, getting increasingly cold, until just before 9am when I returned to the cottage to warm up. I was pleased to have caught up with the rest of the local gull interest though this Laughing Gull was starting to annoy me. It's interesting how, after the initial finding, all the views are very brief and are often only "reported" or at least not from named locals, so one wonders how accurate some of these later sightings actually are.

A fairly rubbish bit of digiscoped video of the adult Glaucous Gull... 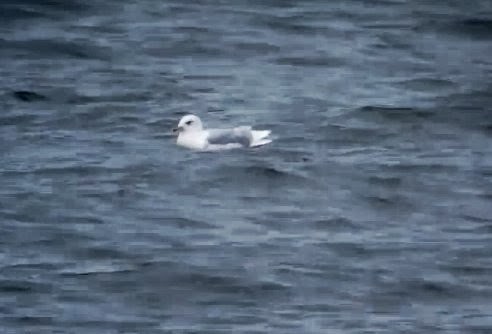 ...and a grab from the same video


The rest of the day was spent doing various DIY tasks around the cottage. We're having a real problem with damp coming in which we can't seem to stop - it's a real pain. Needless to say, later on the Laughing Gull came up on RBA as having been "reported" again with a brief sighting that morning in Marazion. It's remarkable how elusive it is compared to the other gulls there which you can catch up with fairly easily with a bit of searching. I remain somewhat sceptical though perhaps it's just sour grapes on my part.


Late afternoon we nipped back into town for some shopping and stopped briefly by the Station House car park again though it was so dark and gloomy by then that there was nothing to be seen. Then we headed north up to Porthtowan to have dinner with my VLW's niece and her partner in their new house. We arrived back home to a real Pendeen fog, thick and impenetrable and hurried to our warm beds.
Posted by Adam Hartley (Gnome) at 11:44