Thankfully I managed to get a good night's sleep last night and woke up feeling much more my usual self. According to the weather forecast it was going to be strong winds and rain for the next few days and this indeed was how it started out. Therefore we decided to spend the day doing some interior work. My first task was to try and get our internet connection sorted. Daily readers will have noticed the lack of updates here over the last few days: this is because we've had not proper internet connection at all. I'd made a couple of calls to the technical support team to be told that I needed a new "filter" that splits the signal between the phone and the ADSL and that they would post one out to me. That was on Monday and it was now Thursday with still no filter so I gave them another call. They assured me that the filter had been dispatched but that it could take up to five working days. What I came to realise however was that whenever I was on the phone talking to them the internet suddenly started working but as soon as the call was finished it stopped again. Could this be a clue? I tried calling up our home phone number and playing music down the line to our answer phone in order to keep the line open. Bingo - the internet started working again! That did indeed sound like something that a new filter might sort out but in the mean time I could at least finally post some photos to my blog, albeit in a rather expensive way that reminded me of the bad old dial-up days. Amazingly enough, at that moment the postman appeared with a parcel containing our new filter and when we tried it the internet was back again without having to make a phone call at the same time.


After that triumph it was on to more mundane matters with some cleaning and painting work to be done. Mid afternoon and the weather was certainly looking brighter: in fact the forecast was now for much calmer conditions over the next couple of days with the strong winds now not arriving until Saturday. We decided to venture forth. I proposed a trip to Penzance so my VLW could pick up a few items that we needed for the cottage whilst I nipped over to Drift Reservoir to have another crack at my arch nemesis the Drift Mandarin. I therefore dropped the rest of the family off at the top of Market Jew Street and I headed off towards the reservoir as the sky started to darken and the rain came down again. I'd been thinking of walking all the way down to the north bank in the western arm to see if I could find it hiding under the trees on that bank but with it now raining rather heavily I wasn't exactly relishing the prospect. The things we do for birding!


I pulled up in the car park to see a gaggle of Mallards standing in the driveway of the house by the reservoir. Apparently the owner there normally feeds the ducks which is why they usually hang out on the water next to his house. From where I was sitting in the car I could see his garage door was open and several ducks were in there gobbling down duck food from some large sacks that were lying on the floor there - what cheeky so and so's! Could the Mandarin be in amongst them? I had a scan and sure enough there he was. In fact he seemed to be the ring leader: the ducks were like naughty children who knew that they should be in there but couldn't resist. They'd get scared and waddle away but then would waddle back for another go. The Mandarin was always the last to leave and the first to head back in there. It was all very comical! 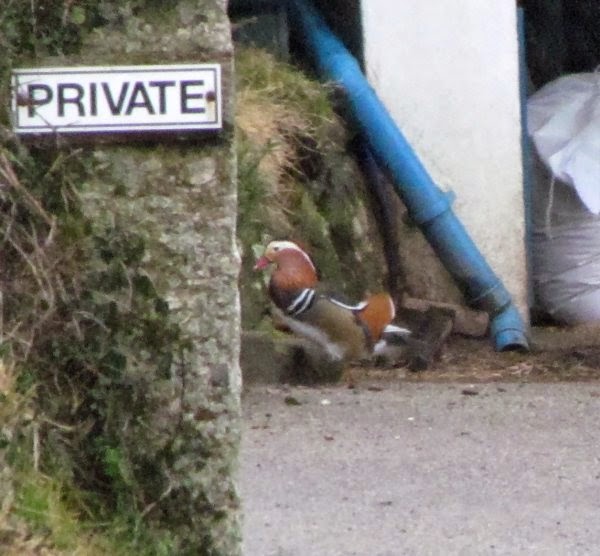 Having achieved my target so quickly from the shelter of the car without having had to get wet at all I decided to quit whilst I was ahead and called up the rest of the family. We arranged to rendezvous at at a café there and some ten minutes later we were enjoying a nice cup of tea and some cake before heading back to the cottage. It had been a productive day with yet another Cornish tick achieved.
Posted by Adam Hartley (Gnome) at 18:35