After a good night's sleep and our traditional cup of tea in bed, it was time to get things started. As the weather forecast wasn't too bad, our plan for today was to crack on with some DIY to start with and then to go out for a bit at around lunch time. Part of the reason for this plan is because very often we work away all day and then don't get out until it's too late in the day to do much. I'd suggested a walk along the coast at Perranuthnoe in order to look for the Hudsonian Whimbrel and the others were happy enough with this idea so we set about our various DIY tasks intending to head out at around midday. Like yesterday, I snatched chances to look out of the window whilst I worked: the two Raven were still about and today I saw a flock of just six Chough. The Kestrel was also around, hunting for worms in the horse paddock next to our cottage. On the sea there were still plenty of Gannets and Kittiwakes feeding off shore and a steady passage of Auks heading past. No Bonxie today though. 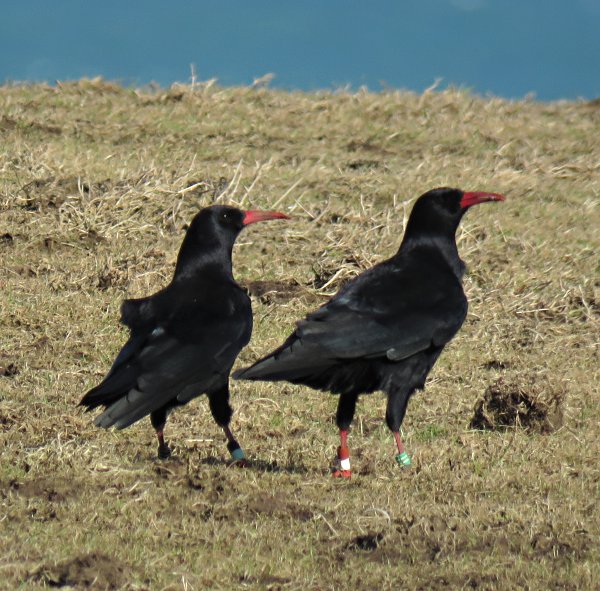 Mid morning an RBA text came through saying that there was no sign of the Whimbrel by Perran Sands. Whilst there were plenty of other place it could be it did cause me to question our plan so that when the time came to head outI suggested an alternate plan of heading over to Newlyn harbour instead to look for the Glaucous Gull there. The other two said that they would prefer to wander around Penzance instead so I dropped them off and then headed over to the harbour for a spot of gullage. I parked up at the Tolcarne Inn and had a quick check of the rocks there. Not only was the splendid male Black Redstart still there but there was also a female type present as well. Also about were at least half a dozen Rock Pipits and a couple of Grey Wagtails. I checked through the gulls that were loafing on the rocks by the mouth of the river mouth but there was nothing out of the ordinary there at all.


Next I headed over to the harbour to look for the Glauc. There I met a lady photographer who was also looking for it but who hadn't as yet seen it. I had a good scour around through all the gulls but there was no sign of it. A local birder from Truro turned up who said that it usually hung out by the first pontoon next to the central quay. I'd already looked there but we all had another good scour around to no avail. The Truro birder did spot the Great Northern Diver in the harbour and I waited patiently to try and grab a photo though it did that vanishing act that divers are so good at and I never saw it again. Eventually we all got bored and I wandered back to the car to see if I could take any more phtos of the Black Redstart though one was shooting into the light and I soon gave up. I got my packed lunch out of the car and decided to eat it back at the quay in case the Glauc should decide to turn up. I had just got to the central quay when I spotted the bird flying away from me along the quay. It headed off to the far side of the harbour where it settled on the pebble beach there, about as far away as it could possibly be! Still, with my new Canon SX60 bridge camera with me (a present from Santa last Christmas) I was able to take a passable record shot of it despite the distance.


Having at least seen my gull I checked in with the others to see how they were getting on. It turned out that they were more or less finished so I headed off the pick them up. Then it was off to the supermarket for a quick shop and back to the cottage to crack on with some more chores. We worked until dark and then settled down for a quiet night in. The Hudbrel later came on the pager (and the Truro birder had told me that he's seen it anyway) so I'll probably have a crack at that tomorrow.