The weather forecast was a bit iffy today in the morning so once the family was finally up and ready to get on we decided that the rest of them would spend the morning wandering around PZ whilst I would do my own thing. Whilst the others were still getting ready I went for a quick wander down to the lighthouse to see what was about. There were quite a few juvenile birds bumbling about on the more sheltered side of the  headland with a young Whitethroat, several young Goldfinches, a young Meadow Pipit and a juvenile Wheatear all seen. I met a semi-local birder there - like me he had a place down here and came down regularly though hadn't yet made the move permanent. He said that he far preferred sea-watching at Pendeen to PG (as do I) and he reported a Cory's that morning which wasn't too bad given the SW wind direction. As a matter of interest the two PC's reported a dozen or so Balearics and a couple of Sooties from the car park that morning as well.


Once the rest of the family were finally ready we headed off. I dropped them all off in the centre of town and then headed off to Drift. I had the place entirely to myself as I wandered around over to the hide. I was looking out for Odonata as there were supposed to be Red-veined Darters at this location though it was too overcast and nothing was on the wing. At the hide I soon found the resident Wood Sandpiper and the two juvenile Garganey as well as a Common Sandpiper and several Green Sandpipers. There were a couple of Little Grebes, a few Great Crested Grebes and a smattering of the usual loafing gulls and geese. A Green Sandpiper right in front of the hide made for a decent photographic subject though it was partially obscured by vegetation. 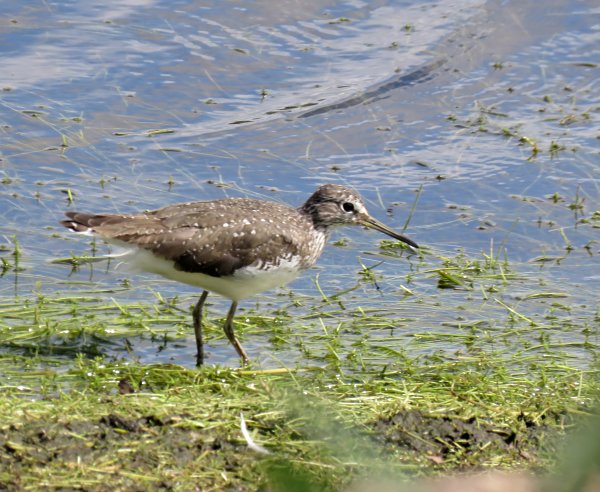 After a while the sun came out and with it the first Dragonfly in the form of a marauding Emperor in front of the hide. I decided to explore beyond the hide a bit but all I could find was a single Black-tailed Skimmer. At that point I got a call from the family that they were ready to be picked up so I started to head back to the car. I walked back along the shoreline and in the now bright sun it was suddenly full of Dragonflies. There were quite a few Emperors and loads of Black-tailed Skimmers but sadly no Darters. Part the bend and on the home straight towards the car park it was more windy and there were far fewer Dragons on the wing. I'd all but given up when I put up a Darter right under my feet. Fortunately it eventually settled and proved to be my sought-after Red-veined Darter at last. I only had time for a quick snap or two before I had to hurry back to the car for my rendezvous.


After I picked up the family we headed over to Trevilley where we parked up and had a quick walk over to Nanjizal beach. The tide was in and we didn't linger before retracing our steps. The only birds of note was a Stonechat family down near the beach. Back at the car we headed the short distance to Trevescan where we wanted to try out the Apple Tree Café. There we enjoyed a well-earned tea and cake before heading back to the cottage for the evening.
Posted by Adam Hartley (Gnome) at 22:36