Another very misty and drizzly day today. We started off with some drama when we realised that we'd run out of heating oil for the cottage so we had to make a dash down to the local supplier at St. Just in order to buy some drums of oil to tide us over until they resumed deliveries in the New Year. We passed a very challenging hour or so trying to poor the oil from the cannisters into the tank in windy conditions without getting kerosene all over ourselves.
After some more cottage work in the morning, given the weather it was decided that the afternoon outing would be a shopping trip to Penzance for those who were interested. I dropped the shoppers off and after nipping in to pick up a travel cot for the cottage, with an hour and a half until I was due to pick them up again I made my way back to Jubilee Pool for yet another session there. I'm really starting to know this area quite well now: I know that the common scoter flock is generally right over to the right of the large black and red pole, that there's usually one female common scoter who hangs around on her own around there, that there are a couple of great northern divers dotted around the bay between the pole and the Mount and I'd more or less figured out from speaking to other birders that the surf scoter was generally on it's own in the distance over towards the Mount. Accordingly I spent most of my time scannning in the this area and after a moderate amount of time I managed to pick it out in the distance - not the best of views but it was good to get another sighting of it. I also managed to pick out an arctic skua which was chasing the gulls. The mist would periodically move in so that one could not see far enough for the surfie and when this happened I spent time looking at the birds along the shoreline: there were rock pipits, a few purple sandpipers, a dozen or so turnstones and an oystercatcher to keep me amused. Finally at around 4 pm the mist looked to have set in for the rest of the day so I made my was back to the rendez vous point to pick up the shoppers and to head off to Tescos. 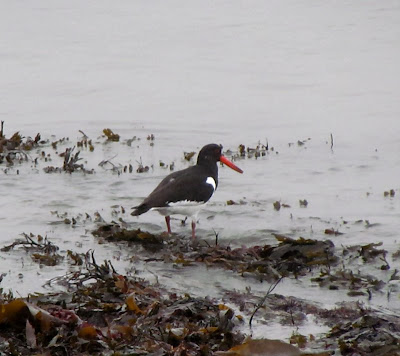 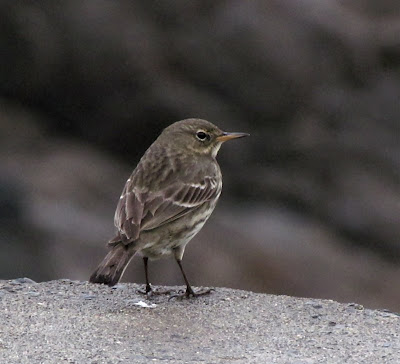 Jubilee Pool birds, taken with the superzoom
with the ISO cranked right up
A couple of digiscoped purple sandpipers in the gloom

I'd like to take this opportunity to wish everyone a very Happy New Year and lots of great birding for 2012.
Posted by Adam Hartley (Gnome) at 18:22