Today I woke up rather early so decided to get on with my renovation tasks as soon as possible in order to give me more birding time with the limited amount of daylight available. Accordingly at around 9:30 I felt that I'd earned a decent break and so set off for Mounts Bay once more where I spent more time unsuccessfully looking for the ring-billed gull in the Tolcarne/Wherry area and also the surf scoter at Jubilee Pool. The scoter flock was rather mobile this morning thanks to a couple of gigs out on the much calmer sea. With the wind a strong westerly today, the Bay was rather sheltered and calm, certainly a lot flatter than yesterday's choppy conditions. In flight one was able to get a better idea of the large scoter numbers with the flock numbering perhaps about 60 birds. Despite spending a fair bit of time looking for the surfie I wasn't able to pick it out today and so didn't improve on my brief views from yesterday. There were at least five great northern divers around the bay today and someone else reported the Slav grebe again.
I also popped over to Marazion for a while on the strength of a text from Dave Parker informing me that the water pipit was still about on the beach. I must admit that I'm not that confident with separating water and rock pipit in winter plumage and spent some time photographing what subsequently turned out to be a rather grey rock pipit (thanks to Dave Parker for putting me straight on that). 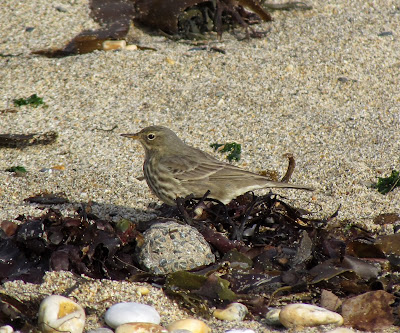 This rock pipit allowed quite close approach
so I was able to get some shots off with the Canon superzoom.
After a while I'd had enough of searching through distant sea duck flocks and loafing gulls and headed back to base where I passed a productive few hours sanding and painting some old tables. Eventually as the light was starting to fade I felt that I needed another break and so decided to nip over to Sennen where yesterday a near-adult Iceland gull had been reported (I'm guessing by Martin Elliot) in the field opposite the Post Office. I wasn't really holding out too much hope but I thought that I would go and take a look anyway. I arrived to find a tractor ploughing in the field in question and all the gulls flying around all over the place. I decided to wait for them to settle and watched them as they swirled around. Some of them started to head off towards Sennen Cove and as they did so they flew quite low so that I was able to get a good look at them as they passed. Suddenly there was the Iceland gull, looking very obviously pale with striking white primaries and I could make out some brown feathers in the surrounding otherwise-grey wing which marked it out as not yet fully adult. I watched it as it flew towards the Cove and then decided to head over there to see if I could relocate it. Down by the harbour there were not many gulls around: a few were trying to loaf on the Cowloe though the very strong winds were making that rather hard. I watched the waves roaring into shore for a while and managed to pick out a great northern diver quite close in over towards the beach. It soon got too dark to see so I headed back home for something to eat and the prospect of some more work this evening. 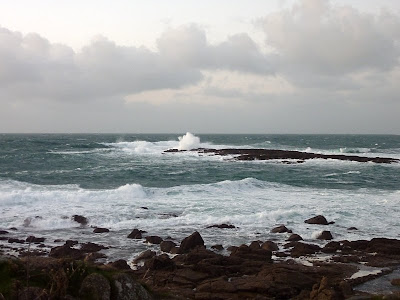 This photo doesn't really do justice to the rather
stormy conditions in the Cove.
Posted by Adam Hartley (Gnome) at 18:33