I was due back down to Cornwall again for a final decorating push before the cottage was to be inspected at the start of the New Year. Having survived Christmas with the various rellies I was looking forward to getting back to my beloved Penwith peninsula to clear my head in the fresh air and to catch up with some great Cornish birding.
As usual I had a look to see if there was anything interesting to stop in on en route but the best I could come up with was a Richardson's Canada goose of unknown origin in Somerset. There were also a few birds that I wanted to see in Cornwall itself, namely a surf scoter off Jubilee Pool and a ring-billed gull at Tolcarne beach. In the event I didn't set off from Oxford until 10am, later than I intended, so given the paucity of daylight I decided not to bother with the goose but instead to head straight to Cornwall. Despite the roads being a bit busy with traffic I made it from Oxford to Penzance in a record breaking 4 hours and that's without going unduly fast. I was just parking up by Jubilee Pool to have a crack at the surf scoter when an RBA text came through that the ring-billed gull had been seen at Tolcarne early afternoon so I decided to head down there instead. There, despite scouring all the gulls the best that I could come up with were a couple of adult Med. gulls and a couple of eider (one female and what I presumed was a first winter male) along with a curlew, an oystercatcher, a little egret and the usual gull suspects. 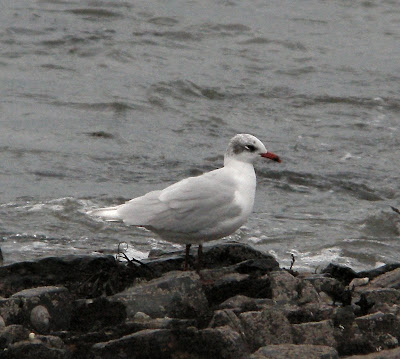 Digiscoped shot of one of the Tolcarne Med. gulls
With not much light left I couldn't hang around too long but instead headed back to Jubilee Pool where I passed the rest of the time until dark scouring the sea. The incoming breeze seemed to have brought in quite a few sea birds with at least 20 kittiwakes, a great skua, a few gannets and what was a possible adult Sabine's gull all out in the bay. On the sea itself viewing conditions were not at all easy with the choppy sea ensuring that the birds were only visibile for brief moments at a time but I managed to find a Slavonian grebe over towards Long Rock, at least four great nothern divers dotted around the bay and about twenty common scoter and the surf scoter (a brief view) off Jubilee Pool itself.
To round things off on the way to Pendeen I caught a glimpse of a barn owl in the headlights on the road to Newbridge. It has been nice to get back to some Cornish birding and I was looking forward to getting in some more before the rest of the family joined me in a couple of days.
Posted by Adam Hartley (Gnome) at 18:28