Today it was a case of getting up early, finishing off packing and then head off back home. Of course typically today was by far the best weather of the week with lovely sunshine and for once very little wind. I have found that after a while the incessant wind does start to get to you and it was a relief finally to be out of it. We actually managed to stick to our plan reasonably well and left the cottage by nine a.m. I had managed to persuade the family to take the scenic route along the North coast and to allow me to stop off at Buttermilk Hill briefly to have a last try for a Ring Ouzel. It was a perfect morning and I would have loved to have had enough time really to explore properly but instead, with the others waiting back in the car I had to be quick. I yomped up to the saddle between the two hills and found the pond which I had been told was a good area to try. Sure enough there were four black thrushes loitering in the area but they turned out just to be Blackbirds. I went up to the summit and scanned the far side for movement but found nothing other than a few mipits. An impatient call on my mobile from my VLW told me that my time was up and I made my way back down to the car, reluctantly having to accept that I'd not managed to catch up with this species on this trip down. We made our way back to the A30 and after stopping off to buy lunch sandwiches at a convenient supermarket headed off north and back home. En route I got a text from Dave Parker telling me that there was a Ring Ouzel on Buttermilk hill late morning! I just laughed - clearly the birding gods didn't want me to see one on this trip and I just had to accept that. Oh well, they'll have to keep until another trip down here.


Reflecting on the trip on the way back home, it had been a rather low key affair from a birding perspective but then I'd been expecting that anyway: there'd not been much around to go for and the weather and the time of year combined to make it all rather quiet. I had in fact been extremely lucky to be around when the Garganey had turned up at Marazion: this species is quite hard to get in Cornwall (it was a tick for Cornwall visiting veterans "P&H" i.e. Phil Taylor and Hiliary Mitchell too) and it only stayed the one day so that had been a real piece of luck. The Brambling had also been a lovely bird to have around the cottage whilst we'd been decorating so there'd been some nice highlights to the trip. We'd not quite managed to finish all the exterior decorating so I should be back down fairly soon when there's some nice weather and the cottage is unoccupied. This should give me another chance to chase after Ring Ouzel which has now been promoted to the status of a Cornish bogey bird for me. 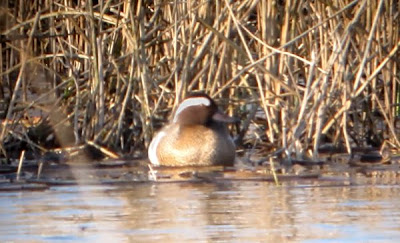 Bird of the Trip: the Marazion Garganey popped it's head up for all of five seconds
whilst I was there. Fortunately I captured it on video, hence this rather crappy
grab which at least allows you to see it's head properly.
Posted by Adam Hartley (Gnome) at 20:56