It's been another quiet day today. The weather wasn't as nice as yesterday with lots more cloud and the wind was stronger and in a north-easterly direction, making some of the exterior decorating tasks rather tiresome. Lying in bed this morning with my tea and chatting to my VLW I managed to see the male Brambling out of the window - a nice start to the day though I only managed to photograph the back of his head. 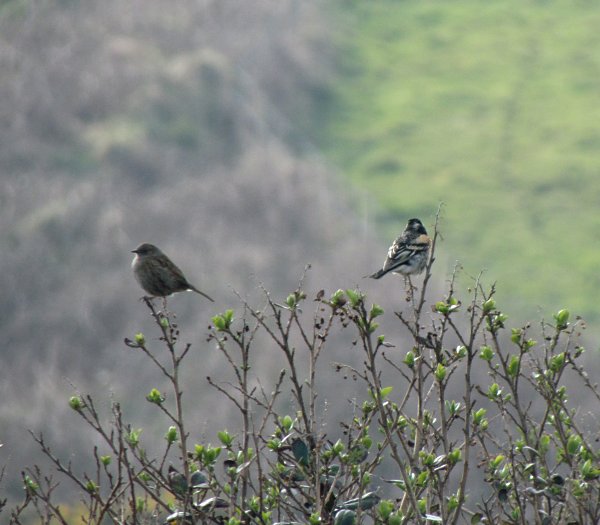 Dunnock and the back of the Brambling


My morning rounds found very little of note apart from the two Ravens again and the Sandwich Tern close in off the Watch. The wind was so strong down by the lighthouse that it was a struggle to even breath so I didn't linger at all. After that we pottered around the cottage doing various DIY tasks and I bumped into John Swann and a friend at the bottom of the garden. They came in to have a look for the Brambling but it's very elusive: despite being around the cottage most of the time I've only seen him for a couple of minutes each day. It turned out that it was they who'd reported the three Ring Ouzels at Men-an-Tol the previous day and as I still need it for my Cornish list I took careful note of where they'd seen it. They soon wandered off to look for the Black-necked Grebe from a couple of days ago at Portheras beach and I went back to my chores. 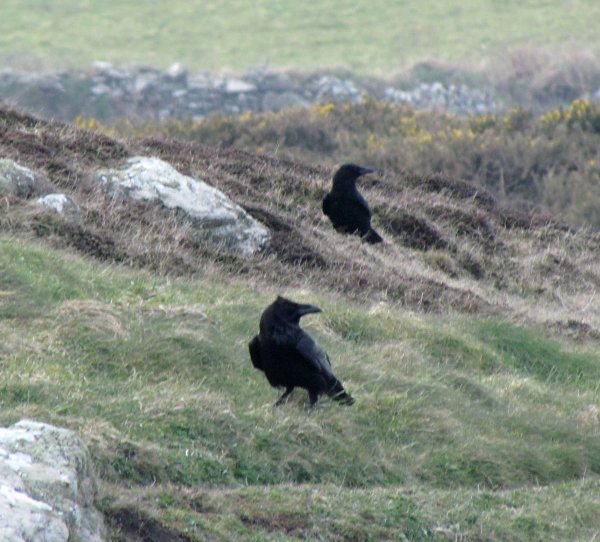 One of the Ravens being watched warily by a Crow

Late morning we needed to pop over to PZ to run some errands.We picked up a couple of pasties whilst we were there and went back via Madron and stopped off at Men-an-Tol. Given the wind, Luke and my VLW decided to stay in the car, eat their pasties and listen to the radio whilst I when on an Ouzel hunt. Despite carefully scouring all the fields I drew a blank. On the way back I found a field which had large numbers of Wheatears in as well as a single Golden Plover and in the distance I managed to spot a variety of Thrushes which looked promising: there was a single Song Thrush, four Fieldfares, a couple of Redwings, a pair of Blackbirds and a bird which flew directly away from me and down over a dip which migh have been an Ouzel though I couldn't be certain. Despite trying to view the field from all angles I couldn't relocate it and with my family in the car growing impatient I had to admit defeat. We headed back home to do a few more tasks and then wind down for the day.

Later that evening a single Ouzel was reported at Men-an-Tol on RBA so I may well have to make a return visit tomorrow.
Posted by Adam Hartley (Gnome) at 20:46