I woke this morning to drizzle and greyness. In fact I actually woke up in the middle of the night: (my internal alarm clock had clearly gone awry) and struggled to get back to sleep again. At 7 a.m. I got up to find that it was actually still dark outside, so I had a cup of tea and read a bit. Finally at 8 a.m. I got tooled up and ventured outside to do the morning Pendeen rounds. In the breeze and wind it was clearly going to be hard work but I resolved to do my best. Down at the lighthouse I met Paul Bright-Thomas (who found the Daurian Shrike last year) watching the sea though he'd had nothing but a single Balearic Shearwater for his troubles. Whilst I stood there a flock of six Common Scoter went by though that was about it. Back at the lighthouse car park I met up with fellow Pendeen regular Ian Kendall and we worked our way back up the road together though with little to show for it apart from the usual stuff - a Grey Wagtail was the most interesting sighting. At the coastal path we parted company, Ian chose to check up the road whilst I opted for the small valley and headland along the coastal path. Neither of us had much luck and I soon headed home to see if my guests were up yet. They were indeed up and after a good cooked breakfast courtesy of my brother-in-law (who is an excellent cook) I was feeling much better. What's more the sun was now coming out and the weather forecast looked much better for the rest of the day.


After emptying the moth trap (which just contained the usual suspects - Rusty Dot Pearl was the pick of the bunch) my two guests and I pootled around the cottage for a while and then hatched a plan. They wanted to do some shopping in Penzance whereas I had a meeting with a holiday letting agency inspector early afternoon (we're in the process of changing our letting agency). Accordingly they headed off and I decided to do some more local birding so I headed up towards Pendeen village centre. I stopped of at the Calartha Farm copse with just one Robin for my efforts before parking up in Pendeen village centre. There were a remarkable numbers of birds here with the Pendeen stores copse full of common birds all chattering away. The path up to the churchyard too was alive with Goldfinches and Sparrows and there were at least two dozen Pied Wagtails on the green field next to the church. Sadly the churchyard itself was empty except for the usual Rooks. Then it was back to the stores to buy some lunch before heading back to the cottage to eat it and await the inspector.


The inspection was over quickly (fortunately she seemed impressed with the cottage) and I was soon free to head out for some afternoon birding. I'd made an arrangement to meet up with my guests mid afternoon in Marazion so I decided to head towards Penzance first to see if I could catch up with the long-staying Rose-coloured Starling that was hanging out either at Morrison's car park or on the telephone wires behind B&Q. I soon managed to find the bird on the B&Q wires and I passed an hour or so trying to get some digiscoped photos whilst it flew about in a field before it finally settled on the wires long enough for a successful outcome.

Next was a quick stop-off at Longrock Pool to look for the long-staying Garganey though I couldn't see it in the five minutes I gave it. After that it was onwards to Marazion where I rendez-vous'd with my guests and we walked out over the causeway to St Michael's Mount for a cream tea in the restaurant. Whilst enjoying our food I got a text from David Parker saying that there was a female-type Ring-necked Duck at Drift reservoir. With nothing else on offer I thought that I'd pop in for it on the way back and to my surprise my guests seemed interested in tagging along too. However, when we arrived at the reservoir car park the rain and the prospect of a ten minute walk to the hide was enough to change their minds and they headed for home whilst I got my waterproofs on and headed on down to the hide.


In the hide Martin Elliot and "Mush" were just finishing up and Martin kindly put me on to the bird immediately. It was asleep with its back to us but fortunately it raised its head on occasion so that I could get a glimpse of its diagnostic head pattern. I busied myself with taking some digiscoped record shots in the gloomy conditions. Apart from the duck there were a few Teal, quite a few Swallows, the usual gulls in the middle of the reservoir and a couple of calling Curlew flying about. 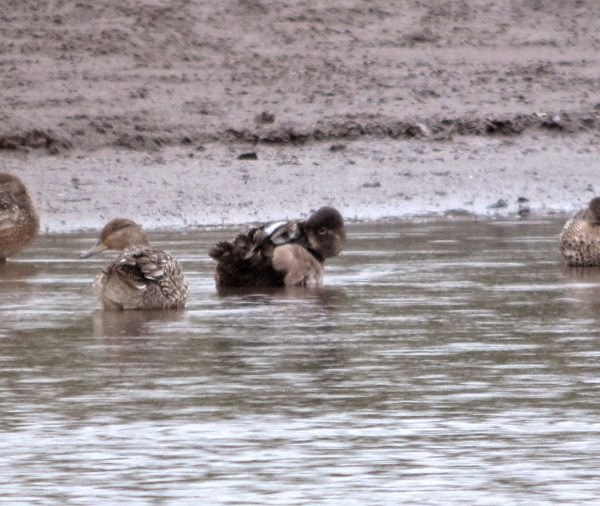 After a while I wandered back to the car and headed for home where my brother-in-law and his friend rustled up a great evening meal of organic vegetable soup and home made apple and pear crumble. It had been a good day in the end with a couple of nice birds and a pleasant afternoon tea with my companions. Soon it was time for bed to catch up on my sleep.
Posted by Adam Hartley (Gnome) at 23:24