So it's that time of year again and I'm back down in Cornwall for my now-traditional October visit. I've been watching events from afar and it seems like Cornwall (and indeed The Scilly Isles) are having a very poor autumn so far with all the action on the east coast or on Shetland. In fact things were so poor that I even had a certain amount of trepidation about coming down - after all I know how bleak it can be when the winds are strong and there are no birds about. Fortunately in the last few days things started to pick up with an Eastern Subalpine Warbler and a Barred Warbler at Porthgwarra, a Little Bunting on the Lizard and a couple of Rose-coloured Startlings, one at St Ives and one at Penzance. I'd suggested to my brother-in-law that he might like to come down again (as he did a couple of years ago) and he was keen. He suggested that he'd come down on Sunday and for want of any other factor I decided to come down the same day. Thus it was that around 8am on Sunday morning I set off from a foggy Oxford back towards my beloved Cornwall.


Regular readers will know that I like to stop off en route should there be something of interest to temp me. However there was nothing of particular note and with the Eastern Subalpine Warbler still being reported that morning I decided to head straight on down and so that's what I did. In fact I had a really good run and so it was in a little under four hours that I arrived in Penzance. I was keen to see the Subalp and so after a quick stop to fill up with petrol I headed straight onwards on the A30 all the way down to Porthgwarra with just a couple of Ravens on the wires near the St Buryan turn-off worthy of note. Thus it was that I turned up at the PG car park a little after 1 p.m.. After working out what had happened to the Pay & Display machine (you now have to pay at the café instead) I paid for two hours and then hurried up the lane past the Doctor's House to the small band of twitchers who were all staking out the scrub and sallows just to the west (not "North" as the pagers have been saying) of the Doctor's House. Apparently it had been seen about an hour ago where it had showed really well beyond the sallows in a clump of dead scrub though it had also previously shown on the far hedge that lined the north west border of the triangular field. Whilst I waited I listened to the quiet chatter amongst the locals: apparently it had been quite difficult to see and some locals had put in a good many hours before they got their sighting. While we waited a Greater-spotted Woodpecker flew over, as did a few Swallows and Skylarks and a Kestrel and a Clouded Yellow flitted about in front of us. After a short while someone called that they'd had a brief glimpse close in just in front of us and Brian Mellow picked it up as well though I, nor anyone else could see it. A little while later a bird flicked up and back down in the same spot and it had the right sort of colour. Another local picked it up again and confirmed that it was the bird but it was hardly a tickable view for me.


At that moment the weather conditions must have aligned in just the right way for a text signal to get through to my phone (not an easy thing at PG for Vodafone at least) and word came through on RBA of a possible Radde's Warbler up by the dried up pond on the moor. As I pondered this a birder came hurrying up to us who turned out to be the finder of this bird. Though he admitted he wasn't sure he seemed quite convinced himself so a few of us decided to go and take a look. A brisk 5 minute walk took us to the pond where there was no initial sign of the bird. We spread out and a short while later a pale green/grey and silver warbler flew back to the original bush. Clearly no Radde's it looked interesting though. I hurried back to the closest viewing point where we scrutinised it carefully. It had no wing bars, pale legs and was rather long winged. It looked like a pale Willow Warbler so there was some speculation that it might be a "northern" race. Anyway, it clearly wasn't a Radde's Warbler or anything similarly good and the finder was suitably apologetic. We all made appropriate "better to mention it than not etc." noises to console him.


Having cleared that up I hurried back to the Subalp twitch only to discover that (of course) the bird had been showing really well whilst we'd been away. Inwardly cursing I resumed my vigil and fortunately was rewarded about twenty minutes later when it appeared once again the far boundary hedge. It performed very well, sitting up and in fact staying pretty motionless for some time so I was even able to take some record shots with my superzoom bridge camera. 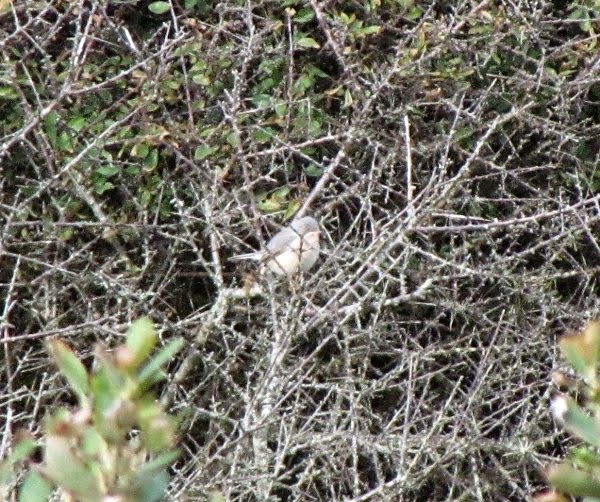 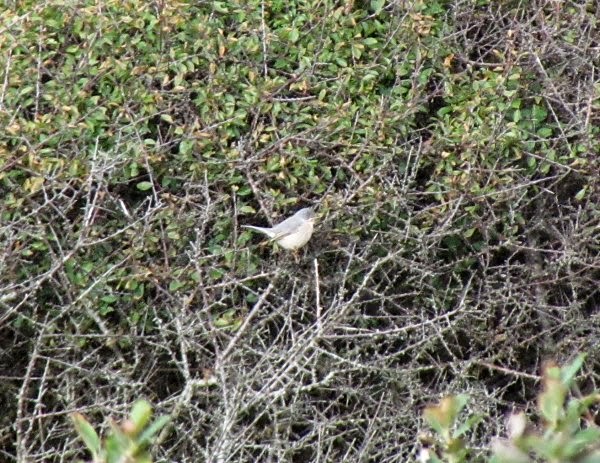 Various other locals kept turning up including Brian Field & John Chapple (who'd been there this morning and had come back for the "Raddes") and we all admired this distinctive warbler.After the bird finished showing I decided that it was time to move on.especially since my parking ticket had run out and I hurried back to the car park John teased me that I was bound to have been clamped though fortunately this turned out not to be the case.


Time was marching on and I wanted to get in some shopping before the supermarkets closed so it was time to move on. Fortunately the new Sainsburys didn't shut till 5pm so I had a bit of time to work my way back. First stop was up the road at Roskestal Farm to look for the Hooded Crow though in the fifteen minutes I gave it I couldn't turn it up. Next stop was the Polgigga cricket pitch though there were only a couple of Pied Wagtail on show. So it was back to PZ for a spot of shopping. I did a lighting turn around the Morrison's car park for the Rose-coloured Starling though it was getting late now and there were no Starlings at all. With my brother-in-law and a friend due to turn up fairly soon I headed back to the cottage to get settled in and to get the kettle on.


That evening Martin Garner posted an interesting article on his Birding Frontiers web-site about the Porthgwarra Subalp identity, speculating that it was rather strange looking for an Eastern Subalp and was more likely actually a Moltoni's. That evening as I was looking through my photos I found that I'd happened to have taken a perfect flight shot showing the tail which apparently was a key part of the ID. Eastern I think I'm right in saying has a deeper white wedge up the T5 tail feathers. 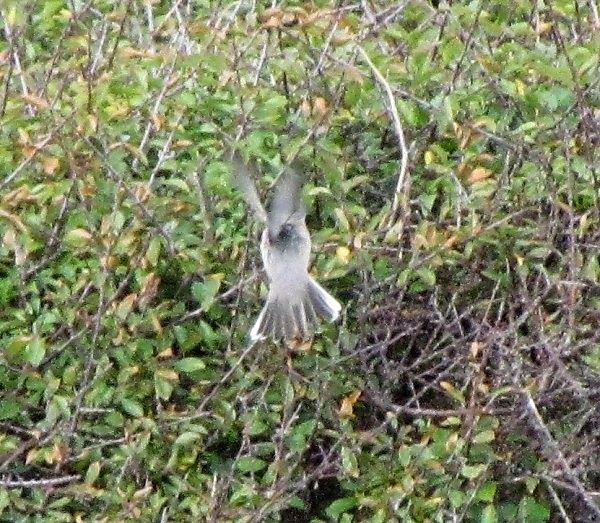 It had been a good start to my stay though I was under no illusions about the prospects for my time down here. Given how quiet it had been I was mentally prepared for seeing relatively little this trip so to have the warbler under my belt did mean that I at least had something good should nothing else turn up. What's more, word on the street was that all three sub-species (Western, Eastern & Moltoni's) were likely to be split so I probably had an arm chair tick in the bag. Let's see what the rest of the week brings.
Posted by Adam Hartley (Gnome) at 11:17