Another low key day today, where we didn't even leave Pendeen. Sadly the lull in the wind yesterday proved to be short-lived and it was back to the usual relatively windy conditions. On my morning round of Pendeen I couldn't even find any Meadow Pipits in their usual field though the occasional one would zip over calling. The was nothing moving in the Old Count House garden so I decided to spend a bit of time on the lighthouse to see if I could find the Black Redstart that was reported there yesterday. After a while I managed to find it: it seemed to be sheltering in the tiny courtyard in the middle of the complex though it made a brief sortie out to the east wall where it was picking insects off the windows and sitting on the wall. I managed a couple of shots of it with my superzoom before it disappeared again. 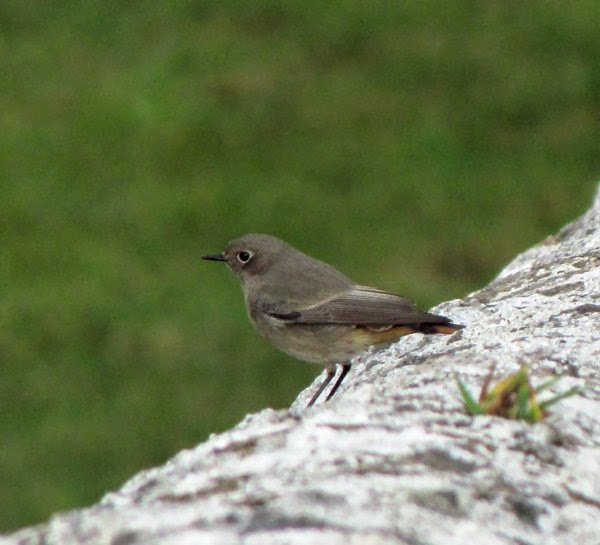 Down on the cliffs below I spotted a raptor whizzing about which turned out to be a Merlin chasing after a Meadow Pipit though a Peregrine soon stepped in, clearly irritated by the presence of another falcon and the Pipit managed to escape.

Back at the cottage we busied ourselves with our usual tasks. I did a photo session for the main kitchen & dining area which took a bit of setting up but I was pleased with the results. For our afternoon outing we decided to keep it local and to go for a walk up to Manor Farm and back along the coast path. It was lovely and calm on the eastern side of the peninsula and we spent some time pootling around in Fisherman's (or Boat) Cove or just staring at the sea. Then it was back home to the cottage for a well-earned cup of tea.