It's that time of year again for me to come down for my now-annual October birding trip. After the relatively quiet start to October down here last year I decided that rather than blindly come down, instead I would play it a bit by ear, effectively being on stand-by ready to depart. I'd block-booked the whole month for the cottage so there were no issues there and I watched from the distance in Oxford to see how things progressed. To start with it seemed very slow: late September was very quiet and the first few days of October weren't much better. Suddenly, however, the winds swung round to easterly and birds started to appear in the South West. It was mostly the usual fare: lots of Yellow-browed, one or two Red-breasted Flys and a Barred Warbler so I held fire but then on Saturday an Alpine Swift was found in the morning at Land's End. What's more it seemed to hang around for the whole day, being seen at Carn Gloose in the afternoon before returning presumably to roost at Land's End again. When it was reported as still present at Land's End first thing the next morning this was enough to galvanise me into action and so it was that at around 10:30 a.m. I fired up the Quattro and set off on the familiar route down to the South West.


As I sped south westwards unfortunately there were no further Swift reports so when I got to Exeter I decided to take a small detour to pay my respects to the Cackling Canada Goose down at Exemouth which had been reported regularly over the last few days. I was no more than five minutes off the motorway when the news came of the Alpine Swift still present in the Porthgwarra area. "Never mind the Goose" I thought! I turned around, re-joined the motorway and  resumed my journey southwards.


Reports continued to come in as I progressed wth the last one being at St .Levan at 2:50 p.m.. I finally arrived there at 3:30 p.m. to find that I had the car park to myself and that there were no birders nor any Swifts to be seen. Dejected I scanned the skies in vain. Another birder arrived, also looking for the Swift though he soon left to try Roskestal instead where it had been reported several times that morning. Another couple of birders arrived and headed over towards the coast path. I was just scanning around when I noticed a gathering of four birders on the other side of the valley intently viewing something out of sight over the brow of the hill. Surely they must be on it? One of them turned and waved and I realised that it was my good birding chums Ian Kendall & Jacquie. I was just fretting as to the quickest way to cross the valley and get over to them when the Swift itself flew above the hilltop just long enough for me to see it, before it dipped back down out of sight again. Get in! Whilst I'd now at least seen it I still wanted to get over to where they were for some better views. I started to run along the footpath that leads down in front of the houses to the coast path. I was just about to join the coastal path when I looked over to the birders who were now looking towards me. I scanned to see what they were doing and realised that the Swift was now flying over to my side of the valley. I moved back to where I'd been standing originally and the bird flew right over my head. For the next hour I enjoyed some cripplingly good views as the Alpine Swift flew back and forth around the houses and up and down the valley, often flying right over my head. Despite my crappy bridge camera I tried to take some shots, adopting the "if I take enough shots some of them might come out" attitude and sure enough I came away with some record shots. 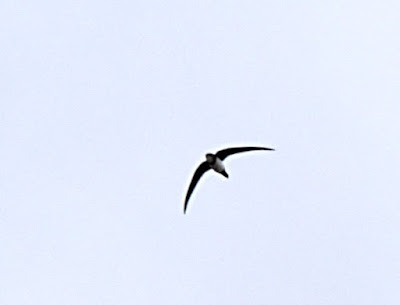 Gradually more and more people arrived to enjoy the show. DC and RM were there and my good friends P&H turned up so we had a good natter whilst we watched the Swift do its thing. 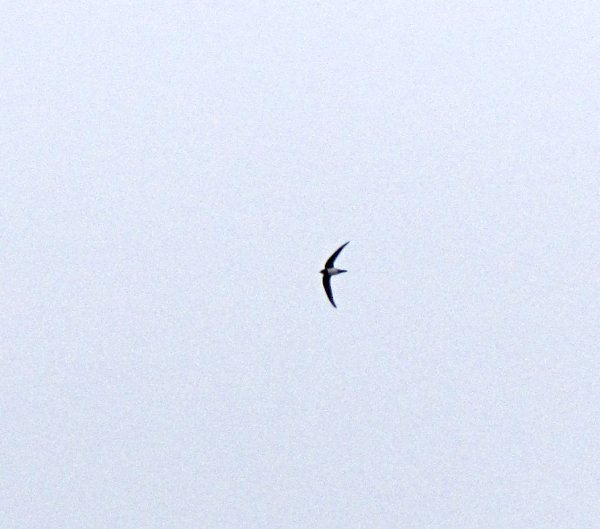 Eventually it started to get rather dark and my thoughts turned to heading back to the cottage and finding something to eat. As the Swift had taken priority I'd not stopped off to do any shopping and as it was Sunday the supermarkets would now be closed. Oh well, beans on toast it was then! P&H took pity on me at this point and kindly invited me over to enjoy a wonderful roast pork dinner at their place. Most delicious! We ate and talked birds until eventually the tiredness started to take it's toll and I headed back to the cottage, picking out in the headlights a Barn Owl by Land's End airfield and a Badger just past St. Just. Back at the cottage I set the moth trap up, unpacked the car and sorted out the cottage. Tired, shortly after 11 pm I tumbled into bed to dream of Alpine Swifts. It had been a great first day back!


By way of homage to the great Scilly Spider blog I thought I'd share a bit of music from one of my favourite artists Gemma Hayes. Her first album "Night on my Side" is one of my favourite albums and I was listening to it as I whiled away the hours driving down to Cornwall today. Not only is she a very original song writer and great singer but she's also very easy on the eyes as well. What more could you want?