As usual I awoke far too early but I've decided just to go to bed earlier whilst I'm here so I'm not suffering too much from the lack of sleep. The weather seemed to be a repeat of yesterday: it started out cold, grey with a stiff north easterly wind before suddenly brightening up and becoming really sunny, calm and warm from late morning onwards. As before I rendezvoused with Ian, Jacquie and Flint in the lighthouse car park and we did some hardcore thrashing of the Pendeen Patch once again. There were noticeably more birds about this morning with lots of Chaffinches flying over first thing - Ian's main marker for whether there's going to be much movement on any given day.


There wasn't much in the fields by the lighthouse and cottages so we went down the coastpath to take a look. Someone had reported the Pallas's again yesterday evening down in the little valley so we searched there thoroughly though today the only bird in the Sallows was a Chaffinch. Ian did manage to winkle out a Datrford Warbler in the bracken on the opposite slope though it was typically elusive and we eventually lost it. We had a total of three Snow Buntings go over north, 1 Snipe, 1 Mistle Thrush and a single heard-only Crossbill in amongst the light but steady movement overhead. Back near the cottages in the one other bit of cover (a clump of Elder in amongst the Gorse) we found a rather dull looking Yellow-browed Warbler though it called correctly and wasn't dull enough to be a Hume's. It soon slipped off so Ian and I wandered up the road to see if we could re-find it though we found almost nothing else up as far as White Gate Cottage.

Back at the cottages after almost three hours of serious Patch thrashing we parted company and I went to chat to Jean Lawman who was watching the sea nearby. She'd seen a couple of Black Redstarts down on the cliffs beneath the lighthouse earlier though they weren't around now. She also reported seeing a Ring Ouzel fly past yesterday - I was suitably gripped! There was just a single Chough about today and two Peregrines sitting down on the Enys. I went inside to have some long overdue breakfast almost immediately followed by elevenses as it was so late. Our handyman came to fix the drains which were blocked and I spent some time helping him out, turning the water on and off as required. Fortunately he was able to unblock them and get everything working again which was a great relief. I also unpacked the moth trap though there wasn't much in it with a couple of Feathered Brindle the highlights.


As I said earlier, it had now got wonderfully sunny and warm by this time so I needed to work out what to do for the rest of the day. The pager messages for Cornwall had got even more quiet than yesterday with our Yellow-browed about the only thing of note apart from a pair of Ring Ouzels (my Cornish bogey bird as you will no doubt recall) in Cot on the slopes beneath Ian and Jacquie's rented cottage. I decided to head over there to watch the slopes whilst I ate my packed lunch. On the way up the road I bumped into Royston Wilkins and a couple of other birders who were checking out Calartha Farm copse. As there was little wind I decided to join them to see what could be found. It soon became clear that there were lots of birds in there though as always it's a very hard place to bird. I soon spotted an interesting Phyllosc which was very white underneat and seemingly had quite a long super though I couldn't get a good view of the wings. Royston had permission to enter the copse from the owner and I went in with him though as we were looking into the strong sunshine it didn't help much. I spotted a Yellow-browed Warbler though it slipped away before Royston could get onto it and neither of us could see the mystery Phyllosc. In the end we came out again as we decided that it was actually easier outside looking in. Eventually Royston saw the Yellow-browed as well and also enough of the mystery warbler to see that there were no wing bars - a shame as I was hoping it would turn out to be something like an Arctic. There was a lovely lemony-yellowWillow Warbler in there (looking for all the world like a miniature Melodius or Icky), one Chiffy, a Blackcap and loads of Goldcrests. I don't think that I've ever seen so many birds in there before - usually I'm lucky to find anything at all. Incidentally, whilst I was there a calling mixed flock of Crossbills and Siskins flew over though frustratingly I was on the wrong side of the copse and so never saw them.


With the copse well and truly checked out I headed on my way, stopping very briefly at Pendeen churchyard though there was nothing of note at all. At Cot it was lovely and calm and hot and I whiled away three quarters of an hour looking down over the slopes of the valley seeing nothing more than a pair of Blackbirds and munching on my lunch. Then, with nothing on the pager to chase down I decided to have a wander down Nanquidno, not that I expected to see anything but it would just be a nice walk in the sunshine. There was predictably nothing at all though at the top in the fields I did spot a hybrid Crow which clearly had some Hoody blood in there somewhere.

Finally I nipped into PZ to pick up some dinner then it was back to the cottage to unwind. I found a nice trio of Wheatear in the fields next to the cottage so I passed some time photographing them. Then it was back indoors to eat and kick back. Given how quiet it's become down here, it had been a surprisingly good day with two Yellow-broweds, a Dartford, three Snow Bunts and several Crossbills all on the Patch. In fact I must confess that the latter is a county tick for me, one of the many common birds that I've yet to see in the county. Sadly they were heard-only though I'm happy to count them for now, and no doubt I'll eventually actually get to see one fly over. Let's hope for a bit more action in the county tomorrow. 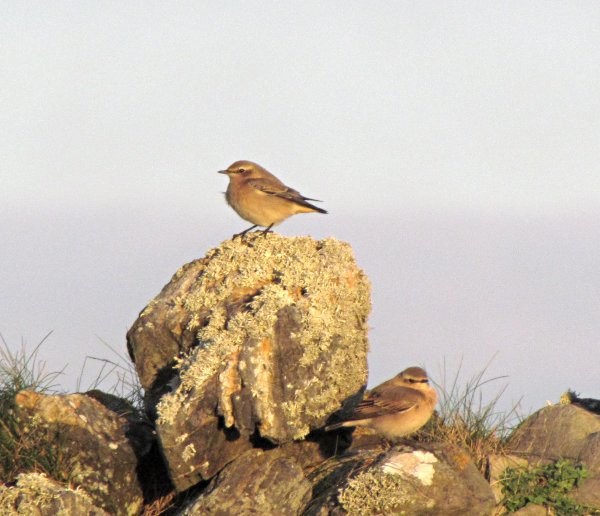 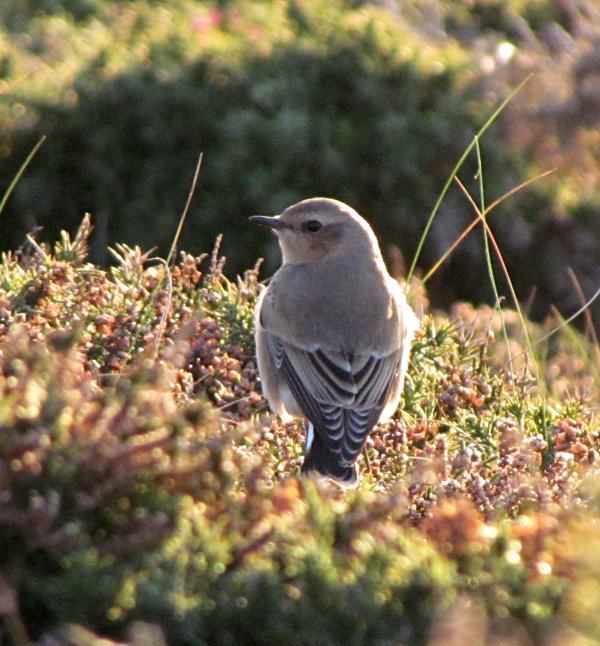