I've had a couple of trips to Drift reservoir so far during my time down here. The reason for this is that it's been the one location down here where there's been anything half decent reported. The first bird of note was a Pectoral Sandpiper which has been lingering at the reservoir for quite a while in the company of a Wood Sandpiper. With nothing much else around presently and with no decent sea watching winds to speak of either, I'd made a mental note to try there when an opportunity presented itself and on Saturday when the rest of the family wanted to visit the Pendeen Farmer's Market I dropped the others off there and then headed over the hill to Drift instead. There in the NW arm of the reservoir I soon found the Pec Sand along with several Green and Common cousins and a juvenile Dunlin but there was no sign of the Wood Sand. The heat haze was something else so my digiscoped efforts were truly appalling but here's a record shot of the Pec.


A couple of days later PSP found a drake Lesser Scaup at the same location though when the news broke we'd already made plans to go on our customary walk from St. Just along the coastal path back to Pendeen so I wasn't able to go and take a look. The next day however, with nothing else on the family wish list, I suggested that the others may wish to pootle around Penzance whilst I made a return visit to the reservoir and they seemed to like this plan so this is what we did.


At the hide a quick scan seemed to show no sign of the Scaup, nor was the Pec Sand anywhere to be seen. However the Wood Sandpiper was about and the haze wasn't too bad so I spent some time taking some photos. 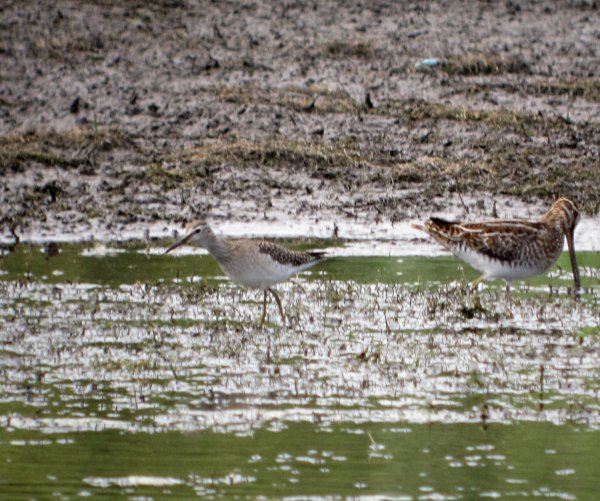 Whilst there I bumped into PM who told me that he'd seen the Lesser Scaup, in the "same location as yesterday". He showed me where this was (opposite the hide on the far bank) and sure enough there it was - somehow I'd managed to miss it in amongst the Mallards during my scan through the birds. I thanked PM for pointing it out to me and set about taking some digiscoped shots of it.


I looked away for a brief while and when I looked back the Scaup was nowhere to be seen. I don't know if it slunk off into the other arm of the reservoir or simply flew off but I couldn't see it anywhere. Other birds of note were a couple of Common Sandpipers, one Green Sand and a juvenile Dunlin. Two noisy Greenshank soon flew in calling loudly so after a quiet start it was starting to get quite birdy! Suddenly PM yelled out "what's that?" and I looked where he was pointing to see a Marsh Harrier flying low over the bank, almost over our heads. We rushed out of the hide to see if we could see it and PM tried to follow it down the path to try to get a photo but to no avail. So just a brief sighting but as it happens it was actually a personal Cornish tick, so a very nice bonus to end the day. I headed back to the car and rendezvous'd with the rest of the family before we headed over to Marazion beach for our customary tea in the car overlooking the sea with a few juv Med Gulls being the only birds of note. Then it was off for our usual food shopping trip before heading back to the cottage for the evening.