We've done a couple of coastal walks during our visit down here. The first was our classic one from St. Just back along the coast to Pendeen. After an early lunch we walked up the hill to Pendeen village centre and then took the open-top bus to St Just. There we got our traditional ice creams from the Coop and then walked down to the school where we had a good wander around the arts and craft fair (with several purchases being made). Then we headed off towards Kenidjack via Boscean. We said hello to the two resident donkeys and had our usual snack stop up at the top of Kenidjack by the castle. The weather was perfect for walking though there wasn't much to report along the way: a few Chough, some Stonechats, a few Ravens and today just one Wheatear (a juvenile) at Geevor. We arrived back at the cottage at around 6 pm, gasping for a cup of tea.


The second walk was from Marazion over to Perranuthnoe to the café and back. We parked as usual in the centre of Marazion and worked our way doggedly through the crowds until we got to the relative peace and quite of Little London. The tide was right in as we worked our way along the shore and at one point we had to clamber over some slippery seaweed-covered rocks. There were quite a few birds taking shelter from the heaving masses though apart from a few Med Gulls there was nothing of particular note.


At Perranuthnoe we put the world to rights over a cup of tea and some cake before heading back again along the now exposed shorline, looking for sea glass along the shore as we went. This time there were a lot more birds including a splendid summer plumage Knot that PSP had first found a few days ago, as well as a couple of Whimbrel. 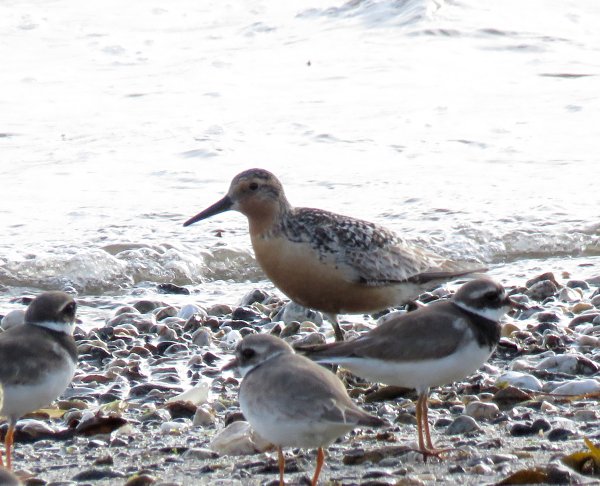 We were all quite tired by the time that we got back to the car so after quickly stopping off at Longrock Industrial Estate to pick up some DIY provisions, it was back to the cottage for the evening.
Posted by Adam Hartley (Gnome) at 20:54