I've been doing the local Pendeen rounds most days, checking out the bird life and taking the occasional photo should such an opportunity present itself. One thing I've noticed this time down here is the large number of juvenile birds around. Because of the sunny weather and the lack of rain birds are having a really good year across the country and this certainly seems to include the Pendeen patch. I can't ever remember it being this "birdy" with blundering youngsters crashing about everywhere. This makes a very pleasant change from the rewardless birding that is so often a feature of the area.


The highlight of the week on the bird front was a juvenile Yellowhammer which flew in calling as I was walking down by the Old Count House next to the lighthouse car park. It perched on the wires just long enough for a photo or two before heading off again. I've certainly never seen or heard a Yellowhammer here before and in general on the Penwith peninsular they are a very localised species. I remember having to go to some particular farm to get my county tick for them so this is a real patch Mega!


There have also been some good insects around with Hummingbird Hawkmoths being seen most days and on a walk to Geevor I came across five Painted Ladies all on a small patch of Hemp Agrimony.

Talking of Geevor I found at least three Wheatears there in amongst the old mine ruins including some youngsters so it may well be that they've been breeding there. Indeed, so delightful were they that I went back the next morning for seconds though the rather misty conditions (typical Pendeen!) meant that there weren't any photographic opportunities. 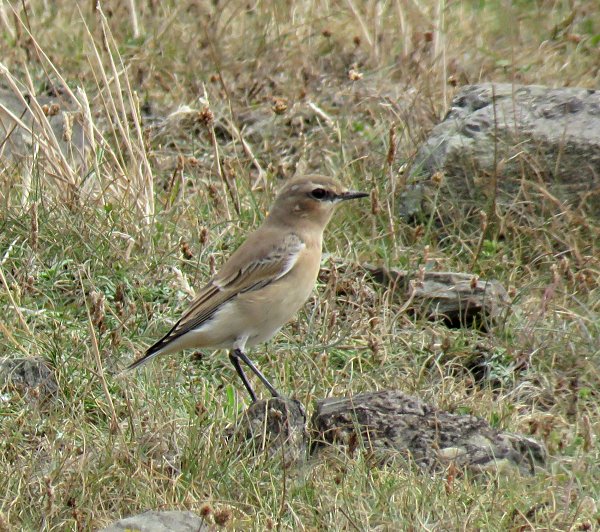