One of the great advantages of renovating a cottage in West Cornwall is that you have to go down there frequently to do work on it. As the children had school to attend (even L our four year old is now going!) the plan was that I'd go down on Thursday in the car and then the rest of the family would come down on the train on Friday evening. This would give me time to do some quality birding work on the cottage before they arrived. 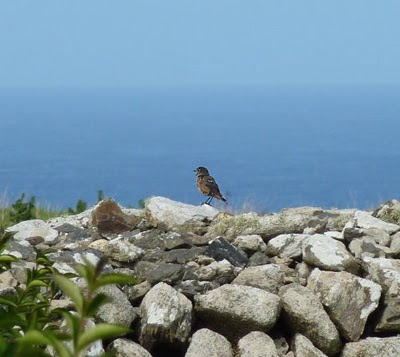 A stonechat on a wall near the cottage, (taken with my point & shoot camera)
The start of the week on the Penwith peninsula before I went down had been full of good birds with a Wilson's phalarope, a whole flock of Ortolan buntings, a citrine wagtail and more wrynecks than you could shake a stick at all around and just waiting to be seen. However by mid week most of them had gone leaving just a few wrynecks around when I set off on Thursday morning. I'd switched my Bird Guides text settings over to just Cornwall before I left and when I arrived a mere four and a quarter hours later (no traffic at all) I looked through them to see what was around. There was a report of one Ortolan bunting in a ploughed field near where the citrine wagtail had been at Nanquidno so I thought that I'd go and take a look on the off chance. It was quite a nice afternoon as I strolled up the hill towards the track and a couple of juvenile buzzards were flapping around and calling loudly as I walked by. At the top of the hill I came across a nice immature white wagtail which I examined closely to check that it wasn't the citrine wagtail but however hard I tried I couldn't turn it into one. 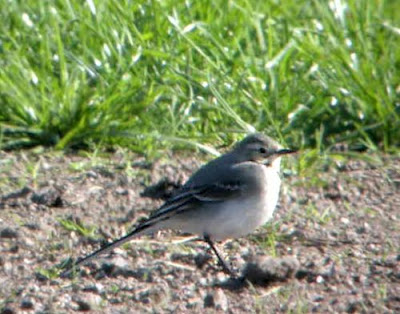 A videograb of a young white wagtail
As I walked along the track to Gurland farm (where the Ortolan field was) there were several wheatears ahead of me hopping on and off the posts and wires as wheatears are wont to do. By the field I found a fellow birder who said that he and two others had been scouring the field for several hours to no avail and that he'd had enough. It clearly wasn't going to be a successful trip but I thought that I'd have a look around whilst I was there. I checked out the field from all angles and also nipped over to see the "muddy puddle" behind the farm where the citrine wagtail had been just recently. There were several white wagtails hanging around, testament to the puddle's wagtail attracting qualities if nothing else. As I strolled back I found a whinchat in the field and more wheatears. Despite the lack of good birds it was very pleasant wandering around in the Cornish countryside in the sunshine. 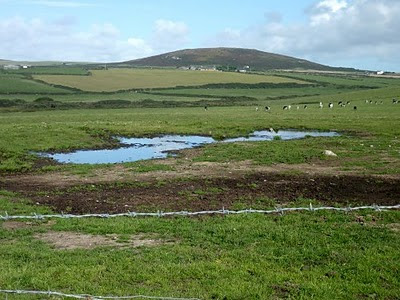 The famous muddy puddle that the citrine wagtail frequented.
You know it's a poor birding day when you're reduced to photographing puddles! 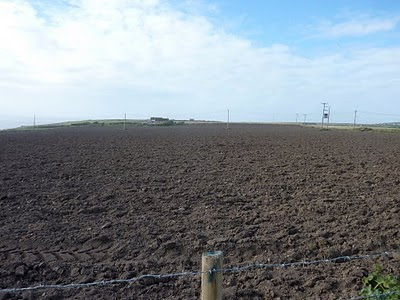 No ortolan buntings here!
Whilst I was in the area I thought that it would be rude not to drop in at Land's End to see if any of the three (yes three!) reported wrynecks were showing though it was by now getting rather late and it had become a bit breezy. I wandered over to Hallan Vean (the boarded-up white house) keeping a look-out for lapland buntings as one had been seen there a few days ago though all was quiet. As I started down the cycle track towards Trinity Loop I met a fellow birder and we got chatting. He came down to this area each autumn and was keen to show me around so we walked along together scouring the area for wrynecks. There were quite a few stonechats about, sitting on tops of rocks and bushes as well as a couple of whinchat, a few whitethroat and wheatears but the wryneck were all tucked up in their hiding holes for the evening. As I walked back towards the car a female sparrowhawk shot over the field, looking splendid in the evening light. By the Land's End car park there was a whole family of stonechats hopping around at close quarters. It was now getting dark so I headed back to the cottage for the evening.
Posted by Adam Hartley (Gnome) at 14:19