Today was down in the planner as a DIY day. Our various relatives had all finally left (not that we hadn't enjoyed their company) and with a rendezvous planned tomorrow with some friends who were holidaying in the area, today was the only free day to make inroads into the outstanding decorating tasks. With no decent sea-watching wind forecast I allowed myself a lie-in this morning as these early starts had been catching up with me.

I was in full flow painting a door when I got a text from Dave Parker saying that there was a turtle dove (which I still needed for the Cornish list) in the car park at Drift. However, there was too much decorating to do and I had to reign in (with help from my VLW) my instinct to drop everything and head off to see it. Later on, however, the children had reached their limit for amusing themselves whilst we worked (you can tell this by the amount of noise that they start making) so I took the two younger ones off to Marazion for the traditional café drink and snack by the beach. On the way back we stopped in at Drift briefly where the turtle dove was still there feeding on the bowl of grain that has been placed just outside the house there. Unfortunately I didn't know about the bowl until I'd put up the four doves (there were three collard doves in addition to the turtle) which went to sulk on some telegraph wires. The best photography angle was from the road so we ended up doing a drive by shooting with my daughter Beth manning the camera as I crawled along in the car. Unfortunately I'd set the exposure far too high (I'd been trying to photograph the bird into the sun beforehand) but it's still come out OK. Beth is actually proving quite a dab hand with the camera. 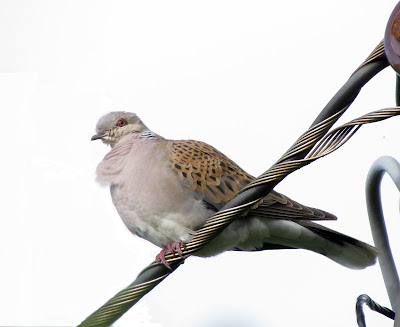 The Drift turtle dove (c) Beth Hartley (aged 13)
Click to enlarge
The overexposure is my fault and I had to
PhotoShop out some blurred foliage but it's still not too bad.
Posted by Adam Hartley (Gnome) at 20:51