This morning I decided to do another early morning wader check. Hayle was the first port of call where I arrived to find the tide fully in and the remaining birds hemmed in around the south-west corner. There were a couple of whimbrel there and a flock of six sandwich terns flew in, did a circuit and them flew off again. Ryan's Field was predictably packed out with at least 20 redshank, a similar number of oystercatchers, 3 common sandpipers and 3 Med. gulls all sitting out the high tide.
Next on to Marazion, where the complete lack of wind meant that the sea was mirror calm. This was great from the point of view of seeing what was around and I soon spotted a drake scoter though try as I might, I couldn't turn it into one of the rarer ones that that have been occurring up north and it resolutely remained a common scoter. A distant splash in the water caught my eye and I saw a strange wobbly fin flopping about on the water's surface: an ocean sun-fish! I'd heard that they were being seen around the coast but it was nice to see one of my own. To round things off, on the beach there was an adult and a juvenile Med. gull
Back in Pendeen I had a wander around the various nooks and crannies in order to look for Grayling butterflies. Last time I was down I'd been excited to find a rather early one but now they were out in good numbers and I found several with no trouble. There was also a rather late female silver-studded blue, a common blue and a small copper. 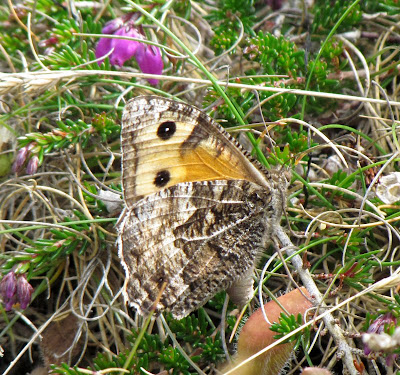 One of many Grayling. I think that this one was laying eggs 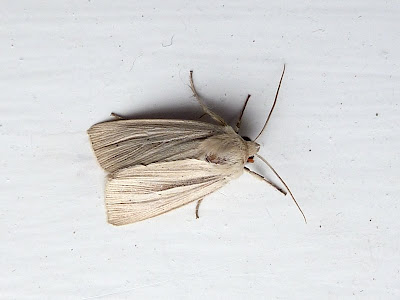 Moth du jour: either a Common or a Smokey Wainscot.
I was told afterwards that you need to check the underwing
colour to determine which one it is.
Posted by Adam Hartley (Gnome) at 10:19