With the wind forecast to be reasonably strong and to swing round from south-westerly to north-westerly overnight naturally my thoughts turned to Pendeen this morning. It seemed like I wasn't the only one to think this and when I turned up at 6:30 there were already half a dozen people there with more arriving whilst I was there so that there were at least a dozen by mid morning. As usual I only had a few hours and had to be back at the cottage by 9:30 but that still gave me a good three hours watching. Unfortunately the birding didn't quite live up to expectations and things were a little slow. There were a few sooties going through and the odd balearic but by 9am it was starting distinctly to slow down. I managed to pick up a stormy briefly though lost it again almost as soon as I found it. Other bits and bobs included a bonxie (which I didn't get on to), an arctic tern and a swift (!) travelling low and fast with the manxies. That's what makes sea-watching so fascinating: yesterday when the wind wasn't that strong there was a huge Cory's passage and then today with a much better wind it was all somewhat disappointing.

In my previous posting I mentioned the fact that I was struggling with my eyesight after a couple of hours of watching. Today I had a policy of religiously swapping eyes at frequent intervals in order to avoid getting over-tired and this seemed to work well. What I also clearly need to work on is where I sit: this morning I plonked myself down in front of the others only to find myself rather exposed in the wind. When Dave Parker arrived he sat down next to me only to remark immediately that it was too windy and he promptly moved. The issue that I have with the wind is that it tends to make my eyes water and then I can't see so clearly. Today I took to shielding them with one hand as I watched and this worked rather well. I also found that this also blocked out peripheral light which made it easier to concentrate so I am considering rigging up some kind of wind & light shield to attach to the scope. I remember reading in some book of birding anecdotes that someone always used to sea watch with a tea towel over their head, presumably for the same benefits that I mentioned above. Clearly something to work on. 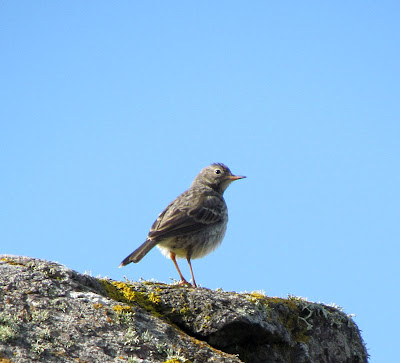 As usual it's rather difficult to provide a sea-watching photo so
here's a rock pipit that I took yesterday whilst down on the beach
with my son L. 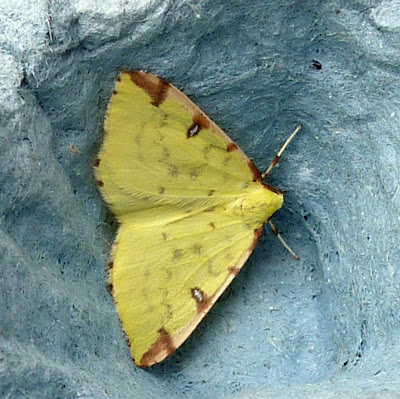 Moth du jour: a Brimstone, part of the huge
catch in John Swann's trap the other day
Posted by Adam Hartley (Gnome) at 21:30