We were due to head back home tomorrow so today was the last day for an early morning outing. The forecast had originally been for a good south-westerly throughout the day but it changed to fairly calm first thing and then strengthening during the day. Nevertheless, with lots of DIY to do and some friends coming over in the afternoon, the only opportunity that I was going to have was first thing in the morning and I would have to make the best of it.

I arrived just before seven o'clock and with only one local at Hella Point I decided to head to Gwennap Head. Up on the cliffs I came across a pair of chough loafing around at a very short distance and rather looking as though they'd just woken up. Cornwall has enjoyed a good breeding year for chough with four pairs producing a total of 15 fledglings so it was great to see these iconic birds making a come-back. At Gwennap Head this time I actually managed to locate the Sea-watch South-West team including Chris Griffin who'd put me onto the black kite recently and who'd found the plain swifts. There was also another birder there who was going to have to leave shortly as his family would be waking up soon so I was thankful that all mine like a lie in whilst on holiday so that I could at least get in a few hours birding in the morning. 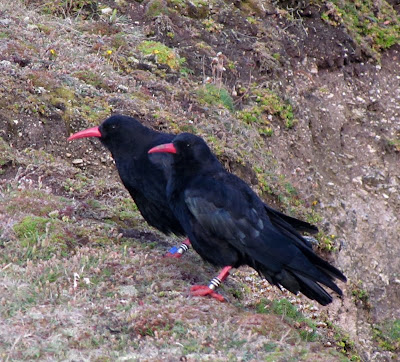 The two chough. Unfortunately they were in the shade
otherwise this photo could have been nice and sharp.

In terms of the birding itself, conditions were rather calm and it soon became apparent that sightings were going to be thin on the ground. The highlights were 1 sooty, 3 bonxies, a few balearics, 3 common scoter and 1 juv. Med. gull.

I know that readers must be wondering about my on-going crusade to improve my sea-watching viewing techniques. I'm still swapping eyes over regular which I find most helpful and today I made a great break through in terms of my wind & light shield: I'd borrowed my five year old's waterproof and threaded the eye piece of my scope through the sleeve (it was just the right size) so that the main body of the coat could be draped over my head, strategically blocking out all the wind (not that there was much today) and light (of which there was quite a lot). Whilst Luke will want his coat back I at least now knew what I needed to find so I'll perhaps take a look through his old coats for something suitable.

On the way back to the car a Painted Lady flew in off the sea and settled, exhausted on the heather for a short while before flitting off inland. I also found a holly blue on the way down to the car park.