This morning I thought that I would take a look at Cot Valley. It was too early for interesting wind-blown vagrants but some crossbills had been seen there a couple of times so I thought that I would have a try for them. It was remarkably quiet there and the only point of interest was a hidden but noisily squawking juvenile bird of prey. It took a while to ID it but by flicking through my BirdGuides call recordings I managed to pin it down as a juvenile sparrowhawk.
Our family outing for the day was over to the beach by St. Gothian NR. On the way there I got a text from John Swann saying that there was a wood sandpiper at Drift reservoir. As I still needed it for the Cornish list but was en famille for the day, I had to grin and bear it, hoping that it would stay until the evening. Whilst at St. Gothian I took the opportunity to have a quick walk around the pit though the only bird of note was a common sandpiper. 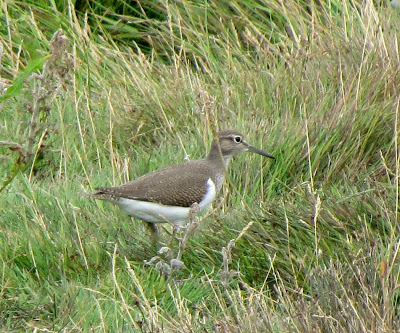 St. Gothian Common Sandpiper
On the way back from our day out I asked to be dropped off at Drift reservoir to see if the sandpiper was still there. From the hide I managed to pick out 6 common sandpipers, 1 greenshank and a single green sandpiper but there was no sign of the wood sand. I knew, though, that there was a blind spot right in the corner of the north-west arm which I wanted to take a look at. However, as I went to take a look something must have spooked the hidden waders because suddenly a flock of a dozen sandpipers flew up calling loudly. The birds seemed all to be green sandpipers but then I heard the distinctive call of the wood sand. The flock circled around together for a while but rather high so I couldn't pick the target bird out from the flock. After a while it split off from the rest and flew around calling for a few circuits on its own before I lost it from sight. It hadn't been the best view of a wood sandpiper that I'd had but it was nice to get it on the the Cornish list. 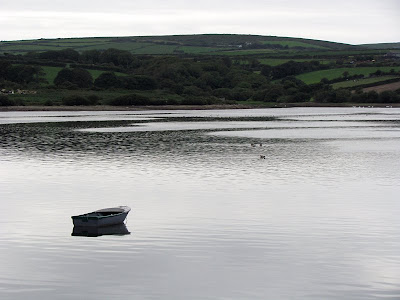 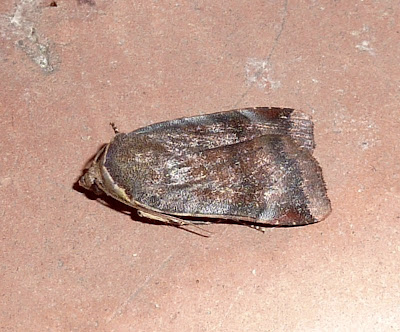 Moth du jour: Lesser Broad-bordered Yellow Underwing - ID courtesy of John Swann as always. I don't run a trap but instead take a look at any moth that I come across. I do occasionally switch the outside light on for an hour or so to try to attract the odd moth but my ID skills are so lamentable (I think that I can ID half a dozen species only at present) that I would be overwhelmed if I had more than one or two to deal with each day.
Posted by Adam Hartley (Gnome) at 10:42